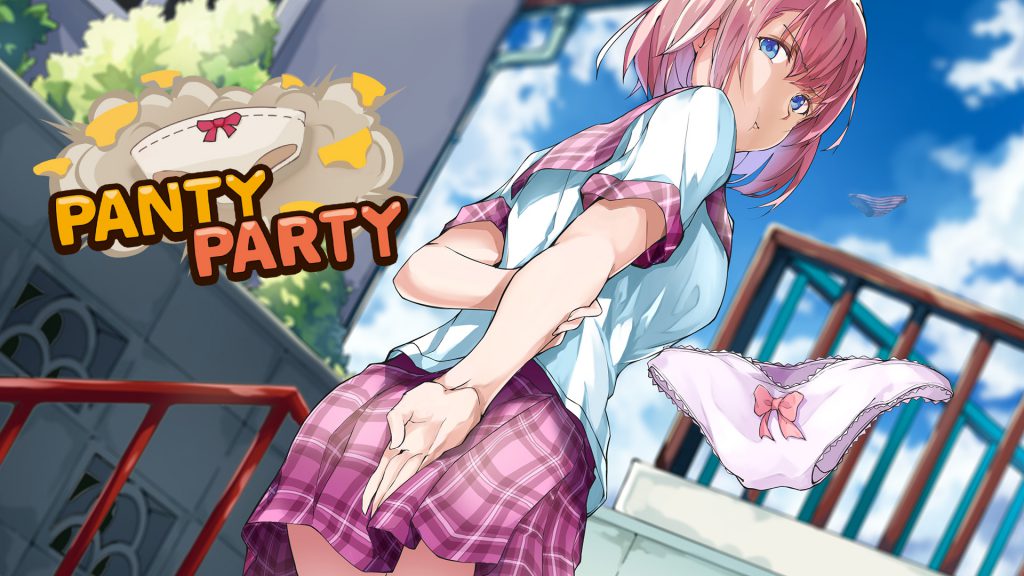 Panty Party was first announced for Nintendo Switch in January 2019 by Japanese publisher COSEN, who recently released My Girlfriend is a Mermaid!?, and have released mostly digital games on the 3DS, Wii U, and Switch eShop throughout their five year history.

The game is developed by the Taiwanese studios HorngYeuan Digital and AnimuGame, being the first Switch release for both companies. A limited packaged version has also been picked up for release in conjunction with eastasiasoft and Play-Asia.

For a game called Panty Party, there’s a surprisingly decent amount of story on offer. Admittedly it’s more Carry On than Kafka, but it makes a refreshing change from being engrossed in the likes of Alrest and Hyrule for hours at a time.

The story begins with you as a Japanese schoolgirl, Yurika, whose train has been delayed due to a panty falling on the track. Soon, a talking panty, Baka Panty makes an appearance, referring to you, Yurika, as ‘The Warrior of Love’.

As The Warrior of Love, you can also turn into a panty, where you must battle all forms of enemy panties to somehow save the human race from its inevitable doom. If it sounds absurd, then that really is the (selling) point of Panty Party.

Control is easy to pick up with the left stick controlling the panty, the right stick the camera, Y, X, and A are different weapons, B is jump, L & R are dodge, and ZL is unleashing charged-up passion, with ZR used for auto lock in multiplayer mode.

Each weapon button unloads a different form of attack, which varies for each panty and includes everything from close-up pummellings to more long-distance shootings. There’s a limit to how many long-distance attacks you can bombard the enemy panties with, so more of a game-plan is required than just simply mashing the A button.

The stages in Panty Party are set on the streets, schools, train tracks, and construction sites of Japan in a 3D environment, although with limitations on just how far you can actually travel, although each battle arena is larger than say the aforementioned Pokkén.

There’s also a small inconspicuous map in the top right corner of the screen directing you towards where all the opposing panties are, which is one of the most necessary functions of the game.

The Story mode has 20 episodes which should keep you occupied for a couple of hours or so and guarantee you a few laughs with its ridiculous storyline. There’s also an Arcade mode which ditches the story and has a number of panty battles before you achieve one of several possible endings.

It’s the Multiplayer mode which will provide most of the longevity and allows for up to four-player split-screen panty battles. Players can select between time limit, (none, 5 minutes, 10, or 15), up to eight different courses, and 17 choices of panties. If no friends are nearby, you can choose AI for either of the other three players.

Other general options include language (15 available), difficulty (easy, normal, and hard), and changing the levels of BGM, sound, and voice.

The self-titled catchy theme song by Amatsuka Mao is available on iTunes, Spotify, and such like. The rest of the game’s music is fairly decent, if rather unmemorable. All of the many cut-scenes in the story are fully voiced (in Japanese) which helps to add to the feel of the game.

Panty Party’s graphics look fine for the most part, with the cut-scenes competent enough. Sadly the in-game scenery lacks in detail and is relatively bland.

Performance-wise it appears the game was released a little too early with some frame-rate issues (particularly on the ‘Game Win’ screen). There’s also some text display issues, although both problems will hopefully be patched out in a future update.

Panty Party doesn’t promise to change the gaming landscape and indeed it doesn’t. What it does deliver is a few laughs with a stupidly entertaining story and several hours of fun and frolics.

This fun does have a limit though, and even though playing through all three modes, while unlocking all panties, should keep you going for longer than some eShop titles; it never comes close to reaching the upper echelon of Switch indie games. The lack of gyro controls are a disappointment, as is the lack of online multiplayer, although COSEN said they will consider adding both in if the game sells a reasonable amount. The game’s score would then be updated to reflect such a change.

All-in-all, Panty Party is good harmless fun. The fun is more to do with the whacky storyline than the actual gameplay on offer, but if you fancy something a little different, at least storyline-wise, then you could do a lot worse than turning into a panty and battling other panties in suburban Japan!