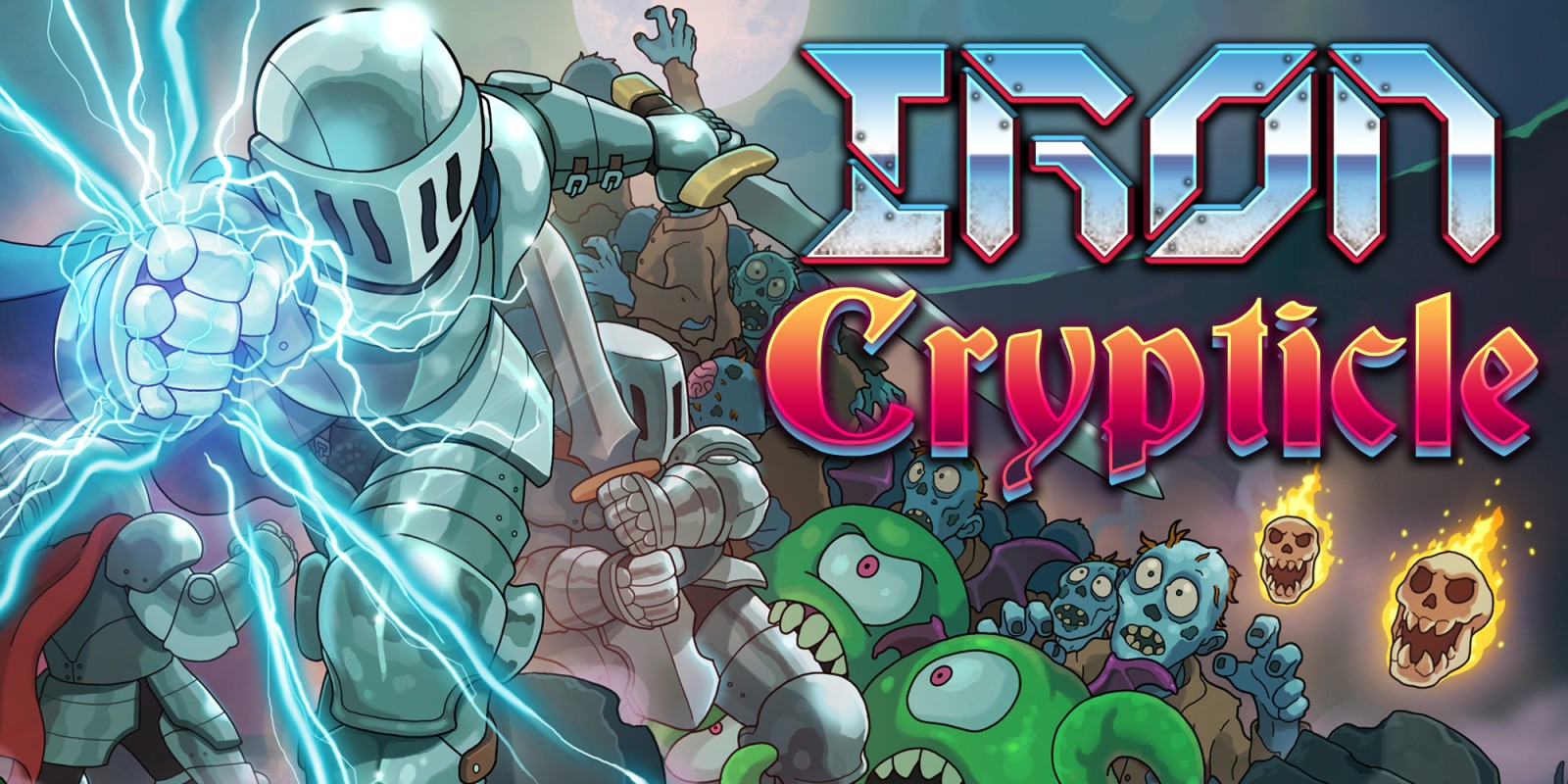 From the creator responsible for developing Morton Strikes Back, Hobgoblin and Hobgoblin 2, comes IRON CRYPTICLE, an arcade wonder that brings together various gaming mechanics from different genres.

Is it an RPG, a roguelite, or a twin-stick shooter? The reality is, it’s all of those in some ways and how developer Confused Pelican has been able to bring them together, is really impressive and now, this delightful can be enjoyed on Switch. Bring… It… On!

IRON CRYPTICLE is the tale of four lazy knights, charged with watching the royal treasures of Cryptonia. Since entire generations have passed since the treasures were last stolen, the Kingsguard who are tasked to watch over the golden relics, have become lazy and their laziness will cost them everything.

On a night where a thunderstorm is briefly lighting up the night sky, the king, his guard and his daughter, are all gathered around the treasure, only to have disaster strike. The treasure has been looted, the princess is gone and there is a huge hole in the middle of the room and the Kingsguard are tasked with reclaiming what has been taken. Do they have what it takes to make it back alive?

Primarily, IRON CRYPTICLE is a medieval twin-stick arcade game that tasks players with going room to room, until they come upon a big bad boss at the end of the floor and move onto the next floor. To move into the next room however, players must first clear the current room they’re in, by killing all present enemies. (Right joystick to fire your arsenal and left joystick to move.)

Should you take too long to clear an area, a more dangerous kind of enemy will appear and more will follow after. The good news though, is while they can be killed, their deaths are not a necessity, as you can still kill the initial enemies and move on.

In the event, you are completely surrounded, and things are looking bleak, you can use the likes of L to activate your Atomic Fist and deal massive damage to surrounding foes, or you can press R to dash. In the event you have a scroll however, you can activate it with the use of the B button. As for other button control inputs, + is to bring up the pause menu and – is to open the map.

Still, there is more to gameplay than just mastering the controls as players will be able to gain XP, upgrade abilities and collect new weapons and items that can soon turn the tide of a tricky situation, into their favour. Just keep in mind that some power-ups and weapons are temporary, so always try to make the most out of each one, when you can.

As for how the actual upgrading one’s abilities occur, you can do it via in-game shops, where you must exchange your hard-earned coin, or carefully collect the food items that defeated enemies can drop.

By chain-collecting food items, players can maximise the amount of points they earn, but by targeting particular food items, character improvement can be attained. Something else you will be required to keep an eye on, is which path to take.

Although you essentially go room to room, picking the right rooms will set you on a path to your friendly cat merchant, or to a game room where playing the Castle Crushers arcade game can net you more coins and health. Just don’t go hoping you can follow the same exact path every time you play, as rooms are reset with every playthrough.

Just in case of all that is enough to keep you on your toes, on the off chance things are too perplexing for you, when playing on your own, local multiplayer supports up to four players to play together, so if you can’t survive the lower levels on your own, why not grab a friend or three and embark on this delightful quest together. You can’t brag about a heroic deed if there’s no one to bear witness to it.

As far as game modes go, IRON CRYPTICLE has two. The first is the standard main campaign and the other is an Endless mode, which allows you to keep going to the best of your ability. Where IRON CRYPTICLE adds filler content however, is having plenty of replay value, thanks to an in-game ledger, achievements and three game difficulties.

The ledger is a record of every item you come into contact with/collect/use, with items ranging from weapon to scrolls, treasure chest, food items and more. By accessing the ledger, players can click on any entry they have earned to learn a bit more about the object of their affection. What’s more, the ledger is five pages long, with 45 items to a page, thus resulting in a total of 225 collectables.

Then there are the achievements referred to as challenges. There are 38 of them in total and ask the player to do a range of things such as picking up 10 heats in a single game, completing the graveyard and defeating 1000 monsters. As for the difficulties, they’re nothing special, as they’re just Easy, Normal and Hard, but it’s nice to have them nonetheless.

Last but not least, leaderboards are also supported, so for the players who can set as high a score as possible, you can share your scores online and see how they do when compared to your friends and players around the world.

When you’re embarking on a deadly quest and moving from crypt to crypt, spooky music and sound effects are a must and what Andrew Lemon created, does not disappoint. More variety could have been added in game, but I love the tune that plays when starting a new playthrough and the main menu track isn’t entirely ghastly either. In fact, I’m actually rather fond of it.

If you ever played Ghosts and Goblins, featuring art and design by Dugan, IRON CRYPTICLE is an arcade title that takes clear inspiration from it and other games similar in nature and improves upon it. The pixel art at work here might not be in the same vein as what Inti Creates is loved for, but it’s pretty close and pleasing on eye.

What’s more, the performance isn’t shabby either. Whether you’re on your tot in handheld, or playing docked as you and your friends are huddled around the TV, IRON CRYPTICLE keeps the pace running smoothly and the combat engaging.

Although I personally have no gripes with the game, I do want to take the time in this part of the review to address what I mean when I referred to IRON CRYPTICLE as being a bit of a roguelite.

While players can use continues when they die, provided they have credits, in the event of a Game Over, you will be required to start anew in your next playthrough, as no stat upgrades and power-ups are kept. At the same time however, even if you start off playing alone, friends can jump in at any time and that is certainly a plus in my book.

Entertaining gameplay? Check. Creative design? Check. Interesting premise and execution? Double Check. Whether you’re playing alone, or with a group of friends, IRON CRYPTICLE is a twin-stick game that’s hard to say “no” to and does both its developer and publisher, proud.