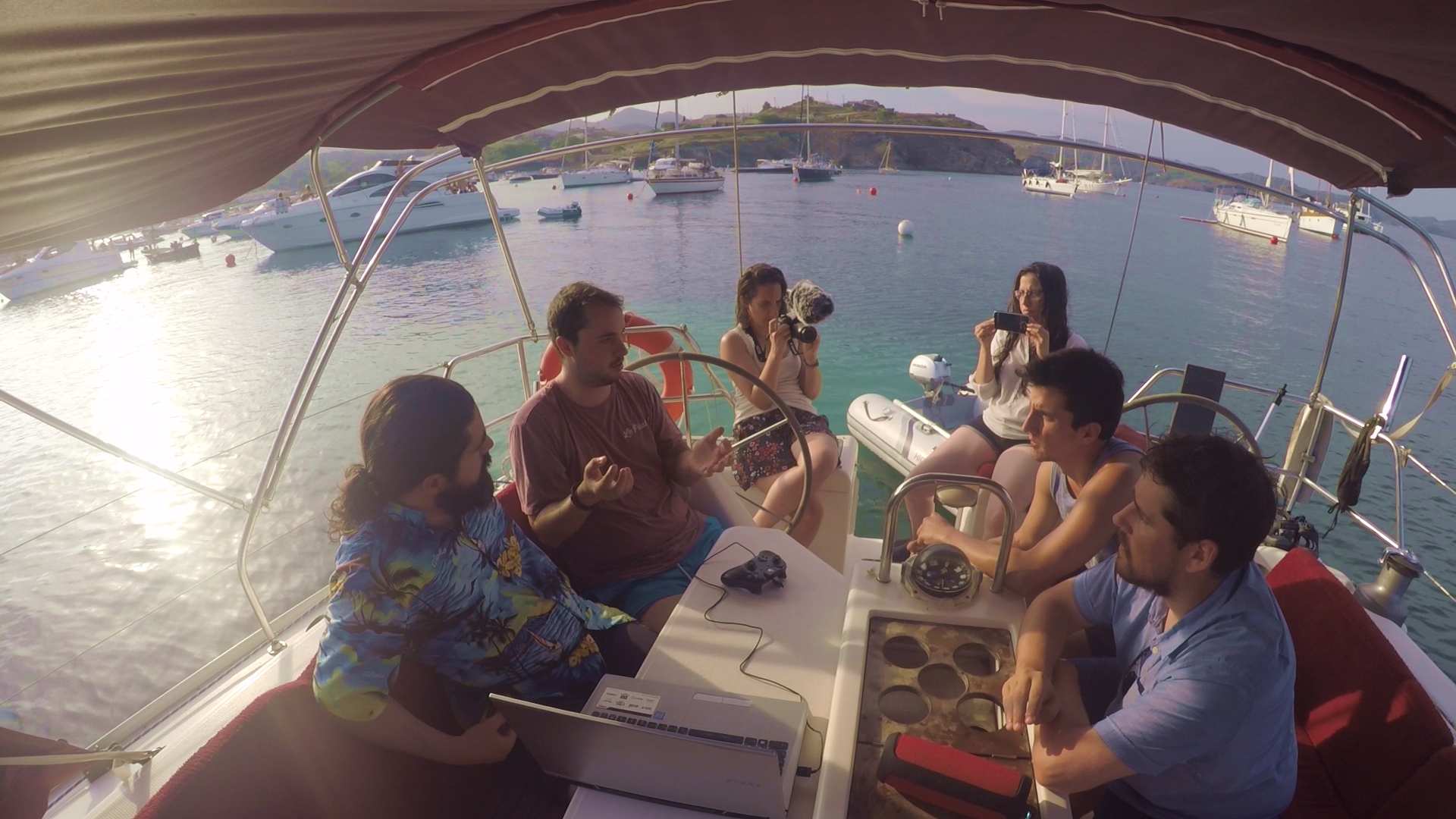 [Interview] Diving, Developing and all things Koral with Carlos Coronado

For Mike and I, we have two equal passions, video games and scuba diving. If there is a game that takes place underwater, we’ll play it, but when you get a video game that’s developed at sea and its developer is also a scuba diver, you can guarantee we’ll go out of our way to chat to him and that’s exactly what we did:

In typical interview fashion, would you mind introducing yourself to our readers and tell us a bit about yourself, your background and your involvement with Koral?

Carlos Coronado: I am an indie game developer and Teacher at the University of Barcelona. I have previously developed and released Infernium, a survival horror [ac-Man for Ps4, Switch and Steam, Mind: Path to Thalamus, a first-person puzzler (Switch, PC) and Annie Amber for Gear VR. I live in Barcelona and I have two passions: Diving and Sailing!

My involvement in Koral consists of everything, from the concept to the development, marketing and etc. I am a one-man dev army.

Miketendo64: For our readers who are unfamiliar with Koral, what kind of a game is it and what is it about?

Carlos Coronado: Koral is an adventure game that will take the player through a variety of ocean environments where the player will solve puzzles to bring Coral Reefs back to life! Think of something like watering a flower but underwater and with more puzzle elements.

Miketendo64: Koral is described as being an educational, puzzle game with story elements that teach players about the current state and inevitable fate of the Oceans is not one that we see much of in video games. You must have as much passion for the oceans as you do video games?

Miketendo64: The player controls a ‘current’ rather than a physical character. What prompted this “character” choice and interesting change of pace?

Carlos Coronado: Because the game is about the ocean, not about you (the player). You are not important in Koral. Actually, if you stop moving, you disappear. You are a current after all! Having something abstract as an avatar for the player made the focus on the ocean and the underwater environments so much easier to solve.

Miketendo64: For the sake of getting it out of the way, do you have much experience with Oceanography or Marine Biology?

Carlos Coronado: Well, I am interested in marine biology but of course I am not an expert on it. Posidonia meadow conservation is something I deeply care about and after seeing the effects of dynamite fishing in Komodo National Park in Indonesia, I just can’t look away from it.

Miketendo64: Not only are you a developer, but you’re also a scuba diver. What certifications do you hold and what prompted you to strap on a dive tank and learn how to scuba dive in the first place?

Carlos Coronado: Urff! I hold a lot of certifications: Advanced Diver + Dry Suit + Nitrox just to name the main ones. About how I started to dive, it is a funny story. I was backpacking with a friend in Thailand and after 5 days partying hard at Koh Panghan I remember he said to me: We have to leave this island or we will die from too much party.

So we bought tickets to the nearest island: Koh Tao. It turns out there is nothing you can do in Koh Tao aside from diving. It is the diver’s island. So we were like: ok, sure, let’s do the open water course, why not!

I guess you can say I travelled and learnt how to dive and after that, I travel to dive.

Miketendo64: How long have you been diving and could you give us a run through of some of the places you have dive?

Miketendo64: Are there any places you have in mind as to where you want to go diving next?

Carlos Coronado: I’d love to have some dives in Grenada and the Caribbean and of course, the Red Sea. Anyone who dives, wants to go to the Red Sea. It is an absolute must!

Miketendo64: One of the things I love most about scuba diving, is how memorable encounters with marine life can be. I’ve helped to release turtles back into the wild and I’ll never forget the first time I touched a Marbled Electric Ray and didn’t get electrocuted. What are some of the marine encounters you’ve had with marine life and do you have a favourite?

Carlos Coronado: Man, sea horses still get me. There is something incredible about sea horses. I could spend an entire dive just looking at a seahorse chilling around. I also had a great encounter with three white tip sharks while doing a drift dive in Komodo. You don’t forget something like that. It is impossible! Exploring sunken World War 2 ships in Corons is also out of this planet. Arghhh there is so many cool encounters I can’t even name one hahahahah.

Developing a video game at Sea:

Miketendo64: As a game developed aboard a vessel at sea, I’m sure you must have faced a number of issues most developers normally never encounter, what was it like and what were the things you had to deal with on a day to day basis?

Carlos Coronado: Well, the most important problem to overcome is Power Supply. How do you get the power to run the computer? You have to switch the engine on or rely on Solar Panels and that is quite a challenge! On the boat, I also tried to do the less computer-involving tasks like designing the levels or drawing the art. It is all about balance but I guess this was the main problem. The other problem is obvious. You are in a boat in the most beautiful environment ever. How does one get the strength to work!?

Miketendo64: Being as though Koral was developed at sea, what prompted you to do it on a boat, instead of in the comfort of a room with four walls?

Carlos Coronado: It just felt right. Koral is a love letter to the ocean. What better way to develop the game than to develop it at sea. For me, this one was a no brainer, and it paid off. There are lots and lots of little features, art style decisions etc. that I learnt while developing at sea. Being close to the medium helped a lot.

Fortunately for you all, we recorded a Making Of Koral video during our time in the boat and it will be released the day Koral releases so you all can see how it was done!

The Plus Side of Procrastination:

Miketendo64: Since you mentioned needing strength, it sounds like some procrastination took place. a game developed aboard a vessel at sea, I’m sure you must have faced a number of issues most developers normally never encounter, what was it like and what were the things you had to deal with on a day to day basis?

Miketendo64: What does the future hold for Koral? Will we see additional content on the way or perhaps a sequel?

Carlos Coronado: No, there won’t be any Koral sequel. If the game is a success I’ll do a PS4 port and maybe add another “campaign” in environments I would like to explore, like the arctic ocean, rivers and cold waters. For free, of course.

Releasing Now rather than Later:

Miketendo64: Out of interest, why release Koral in May, when you could have held off for World Oceans Day on June 8, 2019?

Carlos Coronado: Who says I won’t do something Koral releated on June 8? Release dates for console are really tight and May 16 was the best date for Koral’s interests.

Miketendo64: Other than Koral, do you have any favourite underwater themed video games? Endless Ocean or ABZÛ perhaps?

A Message for the Public:

Miketendo64: Lastly, is there anything you would like to say to our readers and your followers?

Carlos Coronado: I would love if they could watch the Making of Koral once it is released on May 16 too! With Koral being made on a sailship it is something that you all are going to love and enjoy!

On the other hand, go to your nearest dive shop and try diving. NOW.

Thanks for taking the time to talk to us about Koral Carlos, have a great release day!