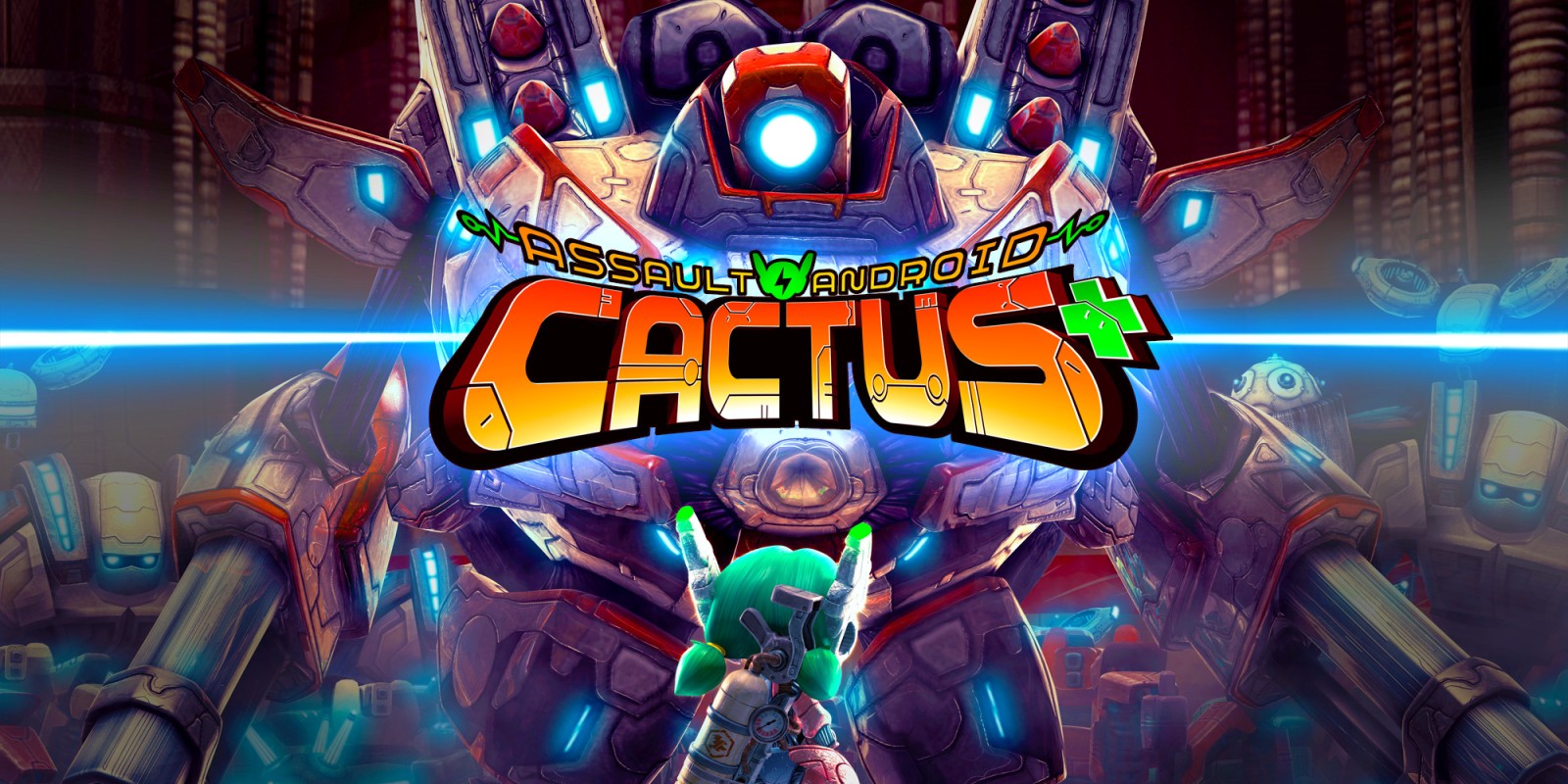 Assault Android Cactus originally released back in 2015 on Xbox One, PS4 and PC. Its release was received exceptionally well and praised for its redefinition and polished twist on the original twin-stick-shooting genre.

Assault Android Cactus+ brings the original game, a faced paced, smooth, sci-fi shooter to the Switch as well as a range of new features, including the all new Campaign+ mode, which gives new players a scaled-up challenge and veterans of the game a whole host of new content to explore on the go, with the option for up to 4 player couch co-op.

Assault Android Cactus+’s story starts off as you following Cactus, an android Junior Constable of this world’s sci-fi police force. While in space, she responds to an average distress call, but all is not what it seems when she becomes stranded on the freighter whence the signal had come from.

It is not all fun and games when it is up to Cactus, and with the help of the other androids who are stuck on the ship to fight off hordes of enemies, which happen to be the ship’s own robot workers.

While the story tended to keep quite light-hearted in tone, there were some underlying serious elements; however, I never found myself getting quite emotionally attached to any of the characters, or surprised by any of the story arcs and twists.

By the end of the game, though, I felt accomplished after going through the 25 stages and each character having their own unique personality, voice and model felt unique, interesting and quaint for a game that I could tell focused more on its core gameplay than actual hardcore story development.

AAC+’s gameplay is exactly what you’d expect from a twin-stick shooter – fast, fun and heart-racing. The classic ‘move with the right stick and shoot with the left’ never gets old and with the game’s unique game-changing features. I found myself becoming quickly addicted to how polished the combat felt. I’ve played a lot of twin-stick shooters, but I had never before this had the urge to replay missions or bosses purely because of how buttery smooth the controls felt.

AAC+ changes up the twin-stick shooter genre in a whole heap of ways –  you start off with four playable androids, with their own loadout of primary and secondary weapons, as you go through the game, you unlock more by either completing levels or certain story moments.

Assault Android Cactus+’s ‘secondary weapon’ system allows the player to press ZL to gain a short burst of invulnerability to dodge and switch weapons. Each character’s secondary and primary weapon is different, with the secondary being stronger and having a cooldown after using.

Along with this, the different power-ups that drop allow for different strategies when playing, and if a power-up drops that you don’t want, it will cycle through and switch to a different one. The power-ups include a shutdown, which stops enemies from moving and attacking for a short duration, a speed boost and additional floating weapons that continuously shoot at foes.

Throughout the game’s 5 zones and 25 levels, you’ll encounter multiple types of foes, ranging from small, fast bug-like robots to large reaper-like robots that teleport while attacking. The difficulty scaling felt smooth and as I progressed I felt like I was continuously growing in skill alongside the increasing difficulty.

Each of the 6 bosses are the bread and butter of the game and redoing these boss levels were a blast – it’s not that the levels in between were bad, but rather felt repetitive with the maps the only key factor to their minor differences.

Assault Android Cactus+ surprised me with the sheer amount of content crammed into it. From online leaderboards to fuel the replay value to the option to have four players play at the same time, I never felt bored and no matter where I was or who I was with, running around and destroying robots never became a chore or boring.

In Campaign+ mode, exclusive to the ‘+’ version of the game, you are tasked with completing the story all over again but in a series of ‘remixed’ stages with different layouts and a much, much harder difficulty. Completing this the second time around was fun, but the boss fights are where it shined – the difficulty proposed a real challenge and I found myself wanting to come and get as high on the online leaderboard as I could before I moved on.

The other modes included with AAC+ are Infinity Drive, an endless wave-based gamemode where the aim is to survive for as long as possible. Daily Drive, a daily-changing one-time unique challenge that lets you compete with other online players for the highest score possible and Boss Rush, a fun, heart-racing game mode that has you completing each boss in the game one-after-another, my personal favourite choice for when I want to test out each character and their weapons.

While going throughout the main game, you collect credits, which can be used in the EX Options menu. In here is a sort of virtual store where you can spend credits on fun game modifiers such as visual and sound modifiers as well as a funny first-person shooter mode.

These unlocks furthermore acted as an incentive for me to keep playing and I had a blast unlocking some of the cooler ones to try out. Alongside these options, there is also a codex and developer commentaries to check out, which was a fun addition and I found myself checking them out once I had completed the game.

While playing through the game I noticed how niche and great the audio design was. Each shot from a gun, each enemy and each clank and creak of the freighter was unique and never got boring – the music was the same, I loved the techno soundtrack and found myself loving it to the point where I listened to the soundtrack when not playing the game through the in-built jukebox setting.

The one thing I was not impressed with was the voice acting, as it felt cheap and amateur, but wasn’t a big deal as you wouldn’t hear it often whatsoever.

At no point while playing Assault Android Cactus did I find myself part of any performance drops, the game felt buttery smooth and the visuals always looked bright, high definition and colourful. The vivid contrasts between the dull robots and the bright environments created a unique visual style that I really enjoyed and the cartoony character and enemy designs had me hooked, each enemy was easily identifiable and each character felt unique in style, not just gameplay-wise.

While playing through the game I noticed how responsive and nice the HD Rumble felt, each shot-of-a-weapon and each enemy attack is felt through the rumble and I just had to appreciate how nice it felt. The accessibility options were a nice touch to allow people to customise their game based on preference.

I enjoyed going through the art and movie galleries once completing the game to view concept art and cutscenes I had accidentally skipped. One thing I didn’t enjoy for some of the content, however, was the reliance on credits. I didn’t mind having to grind out credits for some of the game-changing EX Options, but I felt kind of pushed away from viewing some of the concept art and codex descriptions when they needed an excessive amount of credits. One more nice touch was the additional outfits for Androids you had completed certain levels on.

Assault Android Cactus+ is a smooth and intuitive twist on the classic twin-stick shooting genre and it’s hard not to become addicted to the pure chaos and customisation it had to offer. Just remember not to give up, the challenge can be brutal.