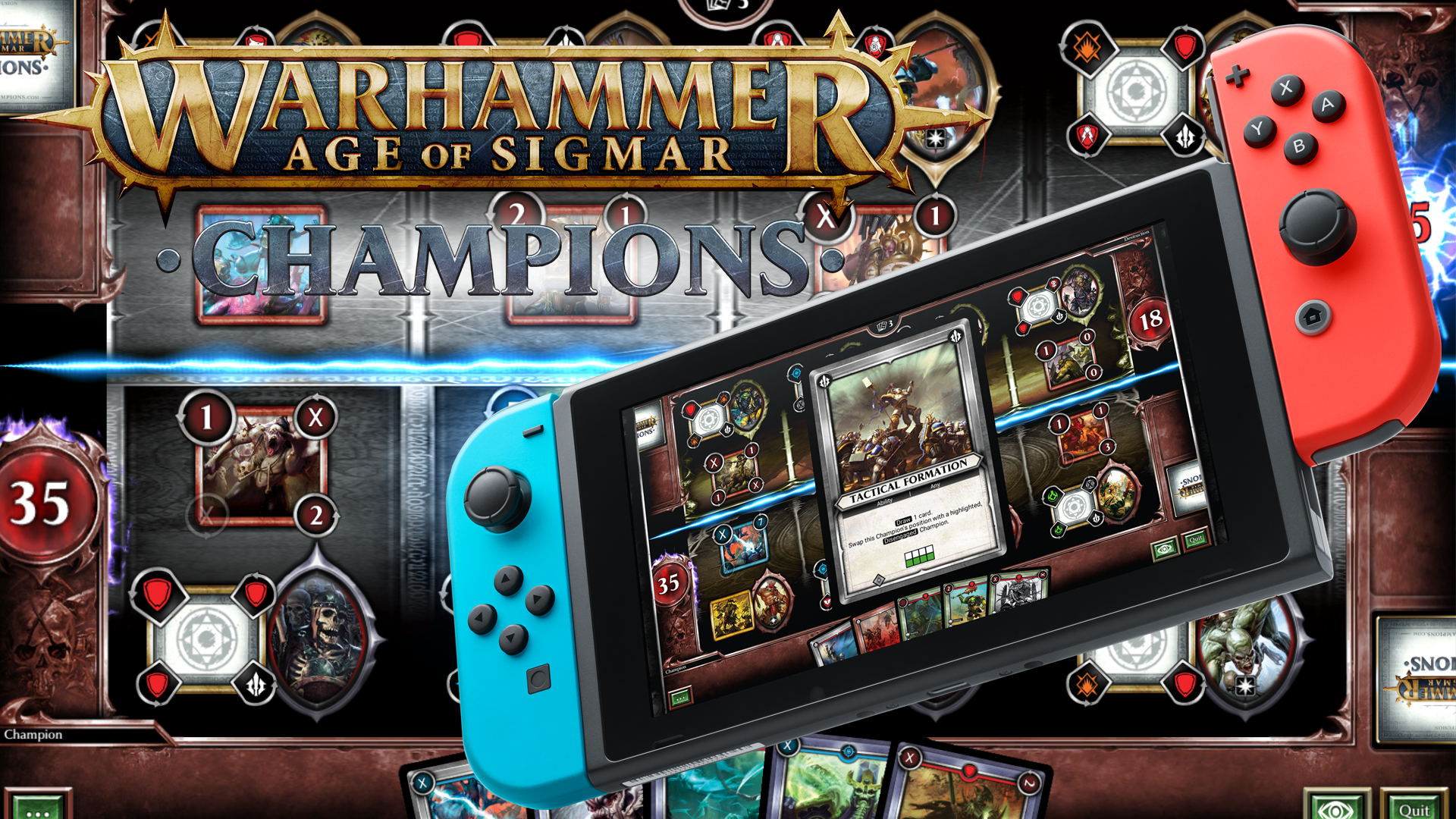 Have you been itching for a collectible card game on your Nintendo Switch as much as I have?

Playfusion has brought Warhammer Age of Sigmar: Champions from Steam and mobile platforms over, and we’ll find out how well the free to play card game model fares on our favorite hybrid device.

As is often the case with a collectible card game, whether or not you will enjoy the game will depend on personal preferences, so I will cover the basic mechanics, but spend a little more time on the idea of how well the app itself presents the game. I will be interweaving both sides of this as they become relevant.

Warhammer Age of Sigmar: Champions is a card game that relies upon each player having their own prebuilt deck of cards. While the game starts you off with a pre-constructed deck, and you can unlock additional decks matching each of the four factions, you can also build your own deck from scratch. There are many ways of obtaining additional cards.

Cards come in a variety of rarities, and while you can unlock and earn free cards by completing missions (and are occasionally rewarded packs for opening enough boosters), most of this is where micro transactions come into play.

The game offers the ability to earn in-game currency that can be used for the same purchases, but it takes a lot of grinding for anything significant. The devs have thrown us a bone, however, in that there is an in-app card scanner that you can use to scan your physical cards into the app.

The basic structure of Warhammer Age of Sigmar: Champions is that each player has a deck of 4 heroes that represent them, 4 blessings, and 30 action cards. Each hero has missions to be accomplished, usually an ability to utilize once those missions are accomplished (deploy a unit, play a spell, etc).

Generally, they have a faction, a tribe, and are either Warrior or Wizard class. Each class has cards that can only be used by a champion that matches it, and there are many actions that don’t require a class. Many actions can only be played by specific members of a tribe. This is much more relevant when you begin to construct your own decks.

Warhammer Age of Sigmar: Champions utilizes lanes to assign your champions and deploy their units and actions. The beginning of each game starts by allowing everyone to place their champions in one of the four lanes. Where you put each champion is irrelevant at first, but could become important later on depending upon the game state.

You may only deploy one unit at a time to each lane, but you can also play spell actions on top of those units. Units and effects that are placed in the lane are highlighted units, and each turn the card will rotate and have an effect (or not), until it goes through all 4 corners and then is discarded from the lane.

Every card game needs a resource management system, and the way it works here in Warhammer Age of Sigmar: Champions is the rotating mechanic mentioned above. You get more powerful effects on the later corners of your actions, and sometimes there is an additional cost for bringing out a card with a powerful immediate effect (like discarding a card).

There are action cards and other abilities that will rotate your card forward or backward, and there are cards that will remove cards from play to help mitigate more powerful effects. Other cards can interact and manipulate the board, so you never feel completely helpless against pending effects. You will also have abilities that are triggered by specific events (usually an increased amount of damage depending on the board state).

The object, as is often the case in card battle games, is to reduce your opponent’s life total to zero. Combat through units is the most common and consistent way of doing this, but there are also immediate effect spells. To carry out this deployment of units and spell effects, you are limited to two actions per turn.

Each unused action results in the ability to draw a card. If you use both, you don’t get a card draw on the subsequent turn. Sometimes it is advantageous to skip taking an action to have access to more cards. You will start each game with four cards, however.

I assume that if you run out of cards in the deck, you just reshuffle, as it was never made clear, but I had some long games with my opponent having mill effects (discarding cards from the top of the deck to the discard pile), and never stopped being able to draw new cards. Card advantage is king in card games, and this is no different here, although it seems as though the developers have tried to limit this mechanic to create a more balanced overall experience.

Warhammer Age of Sigmar: Champions is a game that will provide hours of entertainment, but it sometimes seems to lack in dynamic interaction with the board state. While I mentioned earlier that you never lack for means of altering the board state through effects, the combat is an area that suffers greatly from its lack of interaction. You and your opponents deploy units, and their effects take place automatically.

This streamlines the process a bit and makes for some pretty bland games at times. In most card battle games, your units interact directly with the other player’s units, whether through being able to attack an individual unit directly, or by attacking with your units and your opponent having the ability to defend, or not. However, the automatic advancement of cards means that you have less agency over the game state itself.

While you will often want your units to run their routine and be discarded, there are too many situations in which the ability to hold off on their attacks or abilities would gain you a crucial advantage. While attacking is very rarely a negative, you’ll sometimes be forced to discard a unit without being able to replace it, leaving you vulnerable to additional effects based on your opponent’s units or action abilities.

It also isn’t made entirely clear that the action or ability your card has won’t be effective under certain circumstances. For example, you will have a spell that deals damage to an opponent, but also advances one of your highlighted units. The game never explains that you have to play the card in the same lane as the specific highlighted unit that you want to advance, and so you end up getting only half of the ability

The same applies to units on your opponent’s side of the board- you will have a spell action that advances your unit, but removed their unit. If they’re not in the same lane, you only get one of the effects. Other cards will affect all units, and will say that, so it seems as though the cards that are lane specific should be worded as such.

There are four factions to choose your heroes from- Order, Destruction, Chaos, and Death. I wanted to really explore the differences and strengths/weaknesses of each individual faction …but after multiple games with each deck I could really say that they had as distinct of a feel as say, the colors of Magic The Gathering, or even the type system in Pokemon, or the factions in Spellweaver. You can, however, level up in your preferred faction the more you play.

Although, again, the game doesn’t quite make it clear how this is relevant to the overall game. Each hero that you put in your deck has a special free ability that they can use once you perform the appropriate actions in their lane.

It is possible that the leveling could affect those abilities, or maybe it influences your rewards earned from winning battles. While the hero abilities are a fun addition, the way you would have to track them in meatspace would be cumbersome, and other games have done better with less complex means.

Warhammer Age of Sigmar: Champions works fairly well as an app, but the interface has some hiccups here and there. The home screen is too busy, and it takes a lot of getting used to compared to other card game apps available widely on mobile. I was hoping that the app being ported over as a game to the Nintendo Switch would help to alleviate some of these questionable layout choices, as well offer improvements in navigation through use of the available buttons.

It operates fairly smoothly for the most part, but I often times found myself preferring to use the touchscreen when in handheld mode, which was uncomfortable because certain actions are better with the controller and so I couldn’t just assuage the Joy-Con to simply use the Switch itself as a tablet.

Other commands are seemingly broken with the face buttons, which made playing in docked mode cumbersome, especially when I found myself getting up from my couch to pull the Switch out of the dock to perform a specific action(like zooming in on a card to read it), only to place it back in the dock. As such, it seems to be preferred that you just keep playing the game in handheld mode, which makes it a less desirable fit for the console as a whole.

Warhammer Age of Sigmar: Champions as a card game itself is passable, but as time goes on some improvements and tweaks could be made to refine the formula. Fortunately for the developer, this enables them to update the game digitally to reflect these tweaks in a way the physical media cannot.

The app itself could also use some quality of life improvements through updates, but for now I’d say that you’re better off playing the physical game or downloading the app on your mobile device.