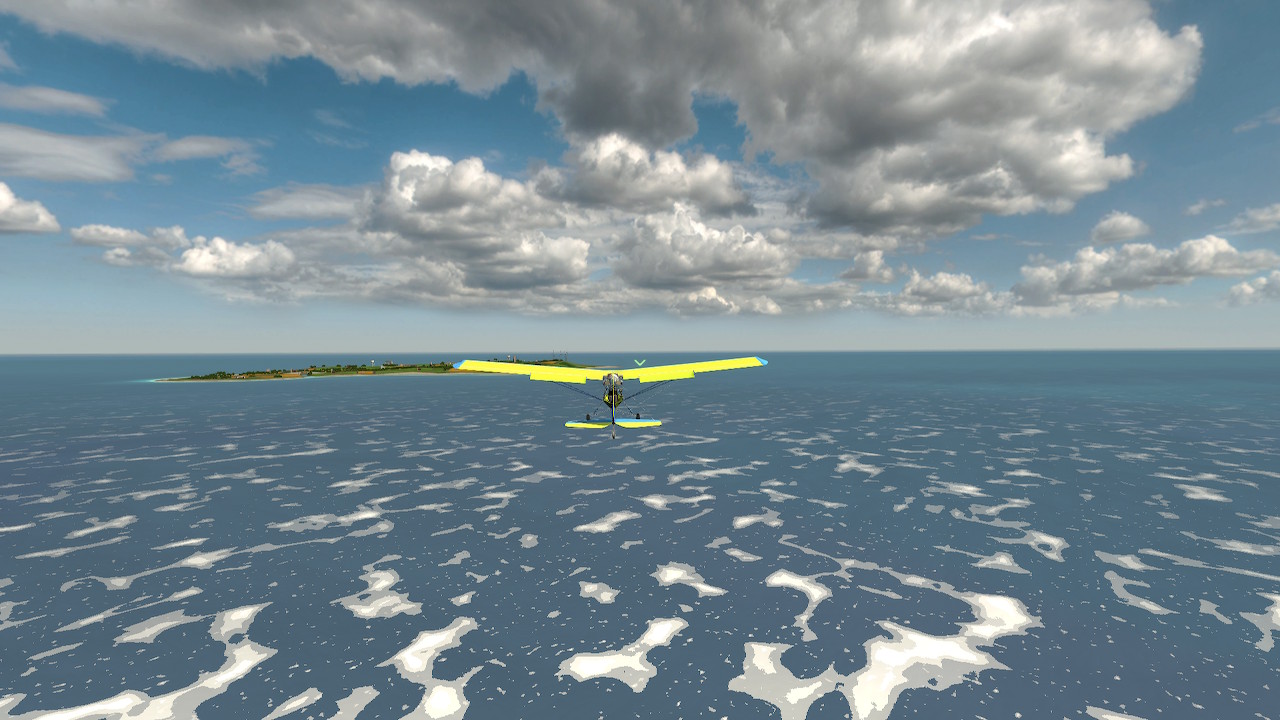 Bitplanet’s newest game flies onto the Nintendo Switch, but does it take off or crash land on the portal console hybrid? The game is available on Steam, PlayStation, Oculus, as well as the Switch, which seems odd to me that it’s not available on Xbox One (according to the game developers website, but that’s beside the point.

Ultrawings is a flight simulator that doesn’t skew too far from realism, though there are game-y aspects like flying through target rings and balloon popping missions. The only real ‘story’ here is to complete missions, gain money based on mastering those objectives in either a timely manner and completing gold medal status.

Money is used to unlock new areas to explore and aircraft for your hangar. The game is pretty light on narrative, though one thing I did find interesting are the short newspaper pieces you were shown either after a crash landing, in which the pilot is presumed missing, or clips showcasing your accomplishments.

Ultrawings employs a standard set of aviation simulation controls. When you first get in your aircraft you must press the ignition switch by positioning the crosshair over it and pressing the A button. From there you can increase your throttle with X, or decrease with Y which is used for slowing down for a landing. B is your breaks which you must engage to come to a complete stop to end missions after landing on the runway or targeted landing spot.

The ZL and ZR buttons control the crafts rudder which can allow you to shift left and right with a slightly more steady control option for maneuvering your craft without having to bank it into turns. Left and Right on the D-Pad cycles through the camera styles for viewing cockpit or close or zoomed out views of your ultralight.

In the game, your office is your hub, and on the Switch you navigate that office by pointing to different places within the room like your laptop, which is where you select your mission, or the corkboard where you can select a different aircraft, modify your control scheme and a few other options. There is a radio of sorts as well, but the music and audio tuners didn’t seem to work for me.

Your missions come in a few standard varieties. The level of difficulty and precision scales nicely here, though the monotony of the game in general, left a bit to be desired in the available mission types. Rush missions have you piloting through a series of rings before time runs out. Hitting the target closer to the center will net you a higher rating and increase your overall score leading to a better medal with each pass through.

Land missions have you taking off and then decelerating to the ground at a target which you must land and come to a complete stop on. This mission type is reminiscent of Pilot Wings main gameplay mode. Other notable modes include Photo which tasks you with photographing landmarks on the island using the in-game table device while you’re piloting your aircraft. Along with the above mentioned job missions, there is a free flight mode which allows you ‘open world’ access to the islands which you can visit at a leisurely pace.

Ultrawings uses a minimalist approach to its game design. The world is colorful and vibrant but lacks textures. There’s almost a cell shaded look to it with shadows helping to give depth to objects, landscape, and the waves around you, though in a very basic way.

You do have three views while flying, which include, cockpit view and two levels of distance. The various views you have can be helpful in tracking down landmarks in Photo missions, other pilots during races, and just to help you take in the various locales. The music and audio in the game are very basic which include some voice acting from your base station narrator. A woman’s voice helps you to navigate the office menus, gives you mission updates and statuses, and scolds you when you crash or fail a mission.

The game’s background music is an odd mix of Spanish/Mexican mariachi sounds which I still don’t quite understand how it fits in the game. There may be more tracks, though I couldn’t get the radio to work and from the looks of it, you can only change the volume of the background music.

Ultrawings is a low budget flight simulator, but in an arena where there aren’t many flight sim games, it may be one of the better ones, even if it’s not that great. The game does do all of its core mechanics well enough, but wrapped in a bland, and unimpressive package. It’s hard for me to recommend the game full without the caveat of it’s just a boring game. The visuals are basic. The accompanying audio isn’t polished and the mariachi music just doesn’t make sense. Hopefully, the next flight simulation game takes off and reaches for the skies.