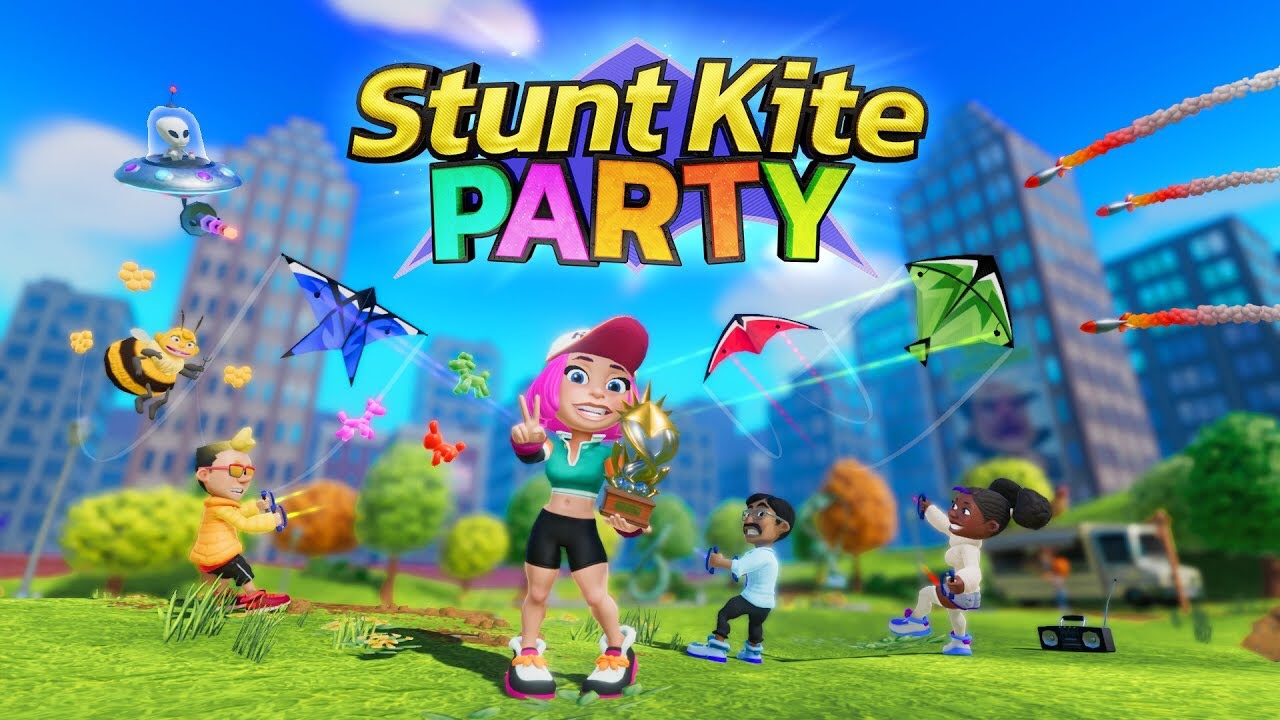 When you think about party games, do you think about the Nintendo Switch? If not, you should. The system has a wide array of party games that range from fun to downright bizarre, and Stunt Kite Party is no exception!  As a joint venture between HandyGames of Townsmen and Aces of the Luftwaffe-Squadron fame, and THQ Nordic, Stunt Kite Party is an action-party and sports game that you probably haven’t heard about, and if that’s the case, it’s time to correct that!

At first, Stunt Kite Party might seem like a cheap eShop title put together for a quick buck, but Stunt Kite Party is more than that. The game features a Story Mode, Tournament Cups, and Customized Tournaments. In Story mode, you play as Eddie F. Teykov, a young kiter intent on becoming a professional, but once he ventures to the Big City to achieve his dream, he finds out that kiting has been outlawed.

Eddie meets a new line of friends along the way and once misfortune strikes and everything is chaos, they are called to save Mayor Waldemar Wyndham of Santa Breeze from an invasion of– Sorry, I won’t spoil what happens but the city itself won’t be able to escape destruction without the help of Eddie and his newfound friends.

The story mode of Stunt Kite Party is fun and easy enough to play although a small portion of the story-line was random, which made it somewhat difficult to follow and understand the purpose behind the events. Regardless, the story was entertaining enough to play through.

When you are not playing the single-player mode there’s additional fun to be had in the form of a wide variety of Kite mini-games. There are about 10 mini-games in total that you can play like Tail Snatch, Catchin’ Kites, Alien Attack, Ghost Hunt, Meteor Blast and others. By the time you decide to embark on these mini-games, you will have already played them during the story mode, which works like a pseudo tutorial. Most of them are familiar games that we have played before like Tag or Hot Potato.

In addition, there are up to eight characters for you to play, which range from the protagonist himself Eddie F. Teykov, to Tricia D’Aviatoni, Sanjay Skyewhiz, Jaliyah Jetspeade, Kitebot, Abram Airhard, Waldemar Wyndbag, and Al Lian. Most of the characters are unlocked through the Story mode.

The game controls were a little more difficult than I had anticipated. You use the left analog stick to move the kite up, down, left, and right. The ‘L’ button is used to slow down the kite, while the ‘R’ button makes the kite fly faster. The ‘A’ button lifts your kite off the ground as well as gives your kite a boost while flying in the sky. It took me a while to get the hang of the controls after I struggled at the beginning to steer the kite without mistakenly pressing the ‘A’ button and boosting myself down. Either way, the controls didn’t stop me from having fun with these mini-games.

Furthermore, the game’s visuals and mechanics are quite good. The world of Stunt Kite Party is very colorful and has vibrant visuals throughout the game. So much so that it made me feel like I was a little kid while playing the game. The soundtrack itself is generic in nature and not very memorable, although there was some great music sprinkled between.

Stunt Kite Party is more than just a little eShop game. It features a variety of game modes like Story mode, Mini-Game modes, two tournament modes, and characters to unlock. Fortunately, the game was very impressive and I had a lot of fun playing through the story.

The art style made me feel like a kid again, having fun with all the festive colors splattered across the screen. Stunt Kite Party might not be for everyone, but I wholeheartedly recommend it for parents with young children, as this title would certainly help keep them preoccupied throughout their day.