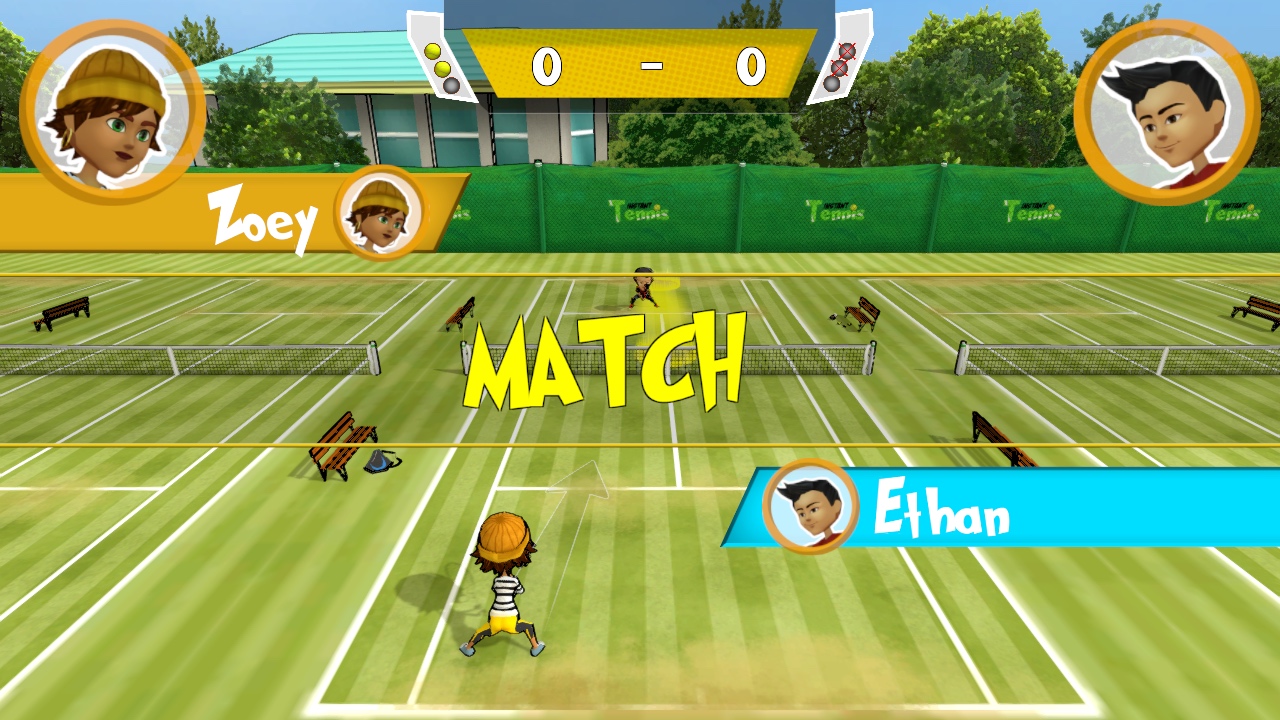 A Swing and a Miss.

BreakFirst Games games second Switch game, after their debut Puzzle Wall, is a family-friendly Tennis game which incorporates motion and traditional controls. In a world where motion controls games came to the masses on Nintendo’s Wii system back in 2006 and Wii Sports kicked off the motion controlled sports games, how does BreakFirst Games’ Instant Tennis playout on the Nintendo Switch?

Instant Tennis is a sports game without a story or campaign mode. You start off by selecting which style of game you want from a single or doubles quick play matches or tournament for up to 8 players or learning the game’s mechanics by playing the tutorial.

If you choose to play with only motion controls your character will move towards the ball and aim a yellow lane which is the target area the ball will go towards. The only thing you need to do is time your swings and the strength in which you swing the racket.

I did find that the motion controls were not as one to one as something like Wii Sports or other AAA Wii/Wii U motion controlled games that I have played. There were probably more times during my playthrough with Instant Tennis where either my swing never registered or if it did the swing strength was so strong the ball was hit way right or left and I ended up hitting it out of bounds.

If you choose the mixed option, you will control your characters aim of their target lane for the ball. This mode had a decent mix of motion and active aiming, though the motion controls were still lacking and slow or too strong in this method as well. Aiming the lane target helped a bit as you could aim further away from your opponent with the hope to wear them out, but even an exhausted opponent could still return a volley, which often dumbfounded me.

Finally, the button controls took the motion aspect out completely and felt a bit more controlled, though obviously less active, and maybe less how a child would play Instant Tennis. This method gave the gamer the most control and best utility of ball placement and strength on each return of the ball by removing the motion gimmick entirely.

Instant Tennis does have a few modes for multiplayer matches. The two player or tournament options were easy to set up and include up to 8 players. While set up meant choosing a character avatar there isn’t much in the sense of character differences aside from looks. This is nothing like Mario Tennis or other tennis games out there where characters have stats like speed, power, technique, etc.

The visuals in Instant Tennis feel a slight step up from the limbless Wii Sports, but less refined and aesthetically pleasing in comparison to the avatars of Kinect Sports games series or the more recent Nintendo Switch title GO VACATION.

Instant Tennis does have a variety of 15 avatars you can choose from. No single one stands out as impressive as they all carry the same visual jankiness of simple design with a big head and cartoon proportions. You can choose between left or right handedness which is a good addition to the game and helps for folks often left having to play right-handed in games that are short-sighted with left-handed people.

There are nine different arena types from clay, grass, and hardcourt. Like the avatars mentioned above, the courses unlock at various levels so unlocking all of them will take a bit of time before you have access to them all.

Instant Tennis is very light in the audio visuals department. While there is background music, it’s nothing worth noting and I typically played with the sound muted and my music playing off Spotify in the background. The game audio does have sound effects like the bouncing of the ball and the ball hitting the racket, but other than that there isn’t much this package has to offer in terms of game sounds.

I mentioned before the motion controls being off and somewhat random. This is a major turn off especially if you want kids to get into the Tennis game. While motion controls may seem like something kids will enjoy, they will get frustrated easily that the game oftentimes does not work or register their exact motions and swing strength.

For a budget priced game, there isn’t much in terms of competition to Instant Tennis. At the same time however, I can recommend this game and would suggest saving your money and purchasing one of the better made Tennis games for the Switch, since Instant Tennis does lack a lot of polish and isn’t very fun to play.