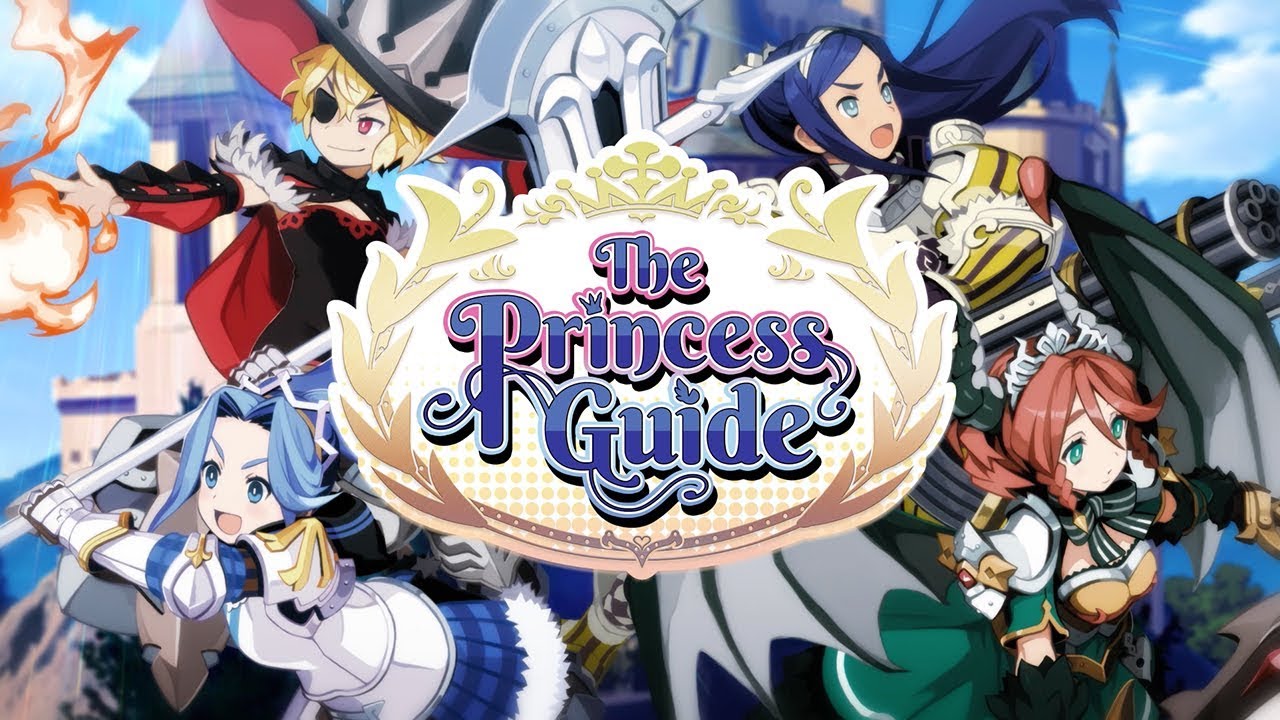 The Princess Guide is an action JRPG from Nippon Ichi Software that is not ashamed to revel in its bizarre nature with character and story elements. In this adventure you control a very skewed and experienced knight who receives requests to work as an instructor for four different princesses. You select which princess you want to play as at the beginning of the game and play as that princess until all four eventually meet up, similar to how all the heroes meet in Octopath Traveler and it occurs much sooner in the adventure.

When selecting between the four princesses they all come with their own strengths and weaknesses with attacking and magic attacks. Liliartie is the gluttonous princess and she wants to slay a dragon who is terrorizing her lands so she can eat it. Veronica is the vengeful princess and the leader of a strong magic guild with her goal being to take over the world. The chivalrous princess Monomaria is from a broken family of the desert lands and she wishes to bring her noble family back together. Finally, Alpana is the princess of the Dragon King race and she is on a mission to bring salvation to all the people through her religion.

At first you will play a mini-campaign for each of the four princesses and after that you need to choose just one of them to follow for the rest of your play through. Fortunately, it doesn’t take too long for their paths to cross and at one point you get all four of the princesses on your team at the same time. Even though there are a few serious events in The Princess Guide, most of the narrative is comical and whimsical much like other Nippon Ichi titles.

This is clear enough by just looking at the exaggerated presentation with the UI and menus using very bright and eccentric colors. Also, during events characters are animated in a very bizarre way, which gives the impression that they are having some type of seizure. The soundtrack was adequate and appropriate to the exaggerated character models with some tunes that stayed in your head, but did not do too much to elevate the experience overall.

When you start a new game, you get to customize your main character with picking a color variation, personality type, and the type of voice they use. During the main campaign, there will be moments where you get to ‘Praise’ or ‘Scold’ your princess after certain battle sequences for stat buffs. You may also be able to Praise or Scold your princess during battles which will boost specific attributes or recover their hit points. However, if you are unfair with your judgement, they might feel that they don’t deserve your blessing which will give you less of a boost.

By Praising or Scolding your princess during story segments it will not change the events of the narrative all that much, but it will give them a new Materia. Materia are basically new commands or subjects for a princess to learn that grant them new abilities to use in battle. You can also obtain Materia during battles by fulfilling certain requirements. There is a special menu where you can teach those Materia to the princesses which will make them stronger and can even unlock bare-bone mini-games.

At first glance, the gameplay looks like a very basic 2D overhead action RPG, but the real depth in the battle system is on the soldier units that your characters control. They come in many different types and they even have separated levels and attributes. You can command your soldiers to perform special attacks through ancient medieval-age relics. These relics are scattered across each dungeon and they can become stage hazards or healing points to aid you in each battle.

It would be an understatement to say that those soldiers are vital assets to attain victory in The Princess Guide. However, your soldiers are very clumsy due to when you dodge an attack they do not dodge together with you. Instead, they usually just run through a hazard or take damage from an enemy attack. As a result of this, it’s very easy for them to die and it can be complicated to revive them. As if this wasn’t enough, when you are all alone without any of your soldiers left, you lose your ability to dodge which was very frustrating because the story gives no reason as to why you would lose this ability to dodge and makes some of the more difficult battles less fun.

Fighting with no soldiers forces you to change your battle stance and in this instance, you don’t have your dodge move, but in its place you get new special attacks. Unfortunately, most of those are not very useful and make the battle much more difficult unless you revive your soldiers by standing over them and waiting until they come back to life. If you try to complete main missions without reviving your soldiers and using your normal abilities and main equipment, the results usually don’t work in your favor.

The chibi art style of the characters are nice to look at, but during battles, thy are confusing to make out because everything is very tiny in the environments. There are so many characters moving fast during gameplay portions and if you add projectiles, explosions, and traps to the mix, it can be very difficult to even find your character in the middle of everything. It didn’t help that the action became so intense at times that slowdown would occur dropping the frame rate to noticeable points that would hinder my experience, although this did not happen frequently.

There is a lot to like about The Princess Guide. I enjoyed the insane story, over-the-top aesthetic, soundtrack, character designs, and how each different character is controlled. However, it’s grind-like nature for combat and unpolished gameplay did not help the overall experience elevate above other similar titles. That being said, the gameplay is still adequate enough to help with enjoying the characters and story elements that are the highlights of the adventure.

With its relatively short length in the genre, taking about twenty hours to fully complete with all four campaigns, The Princess Guide is unique enough to recommend if you’re looking for something different in a JRPG.