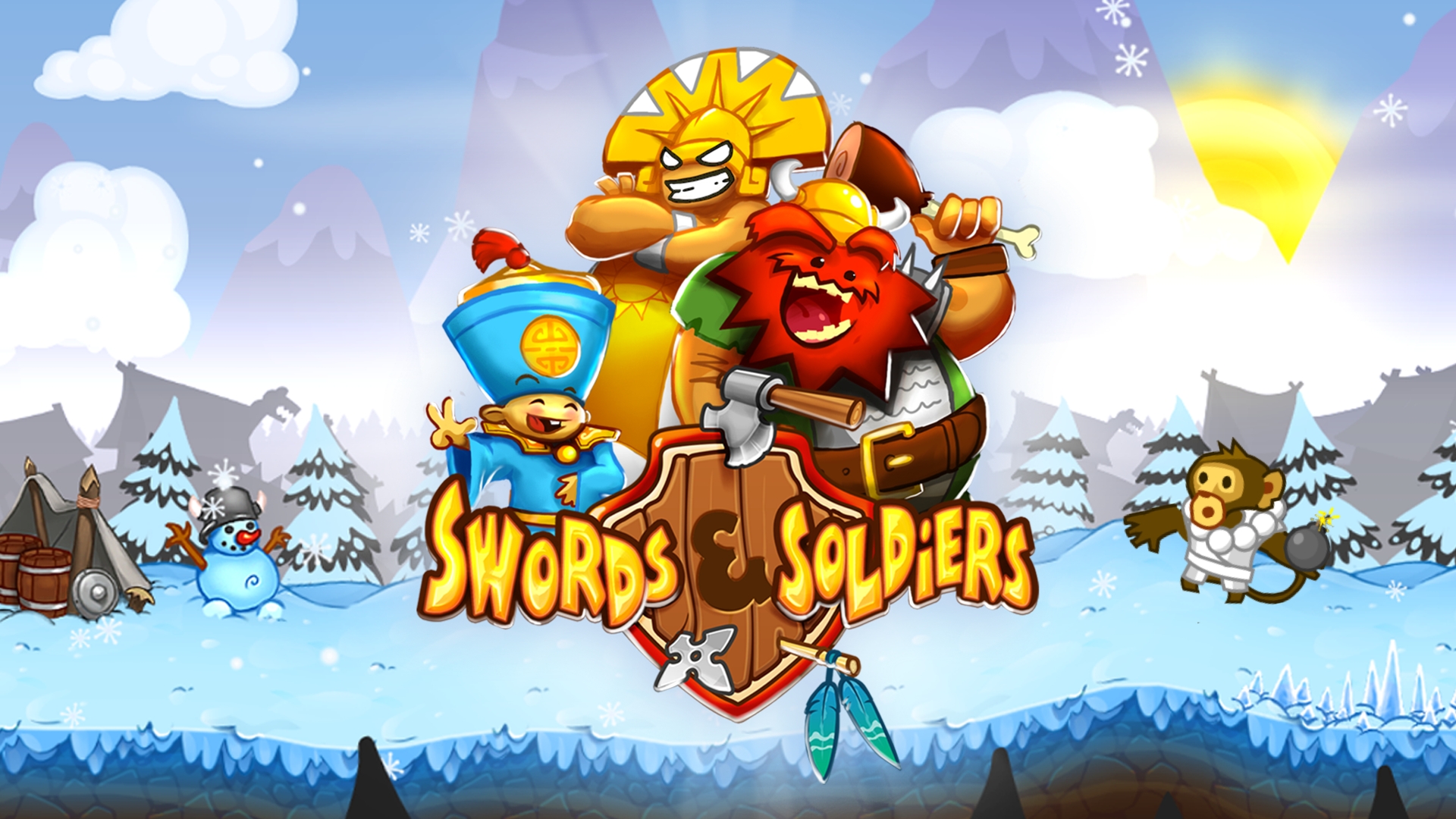 From Age Of Empires to the Command & Conquer and Starcraft series, Real-Time Strategy games have been around for decades. These games sees the player having to manage a crowd of soldiers, having to command units individually and as a group.One small choice can end up making a difference, and one wrong decision could cause a cascade of events that result in being the deciding factor between success or failure.

Now, with the first game already out on the Nintendo Switch, and with its sequel collecting all previous DLC content in a new package called Sword & Soldiers II: Shawarmaggedon, soon to release. How does the original version of the game improve in its new home? Let’s find out!

Visually speaking, Swords and Soldiers doesn’t use 3D visuals like in other famous RTSs, opting instead for clever animated 2D visuals with some side-scrolling characteristics to allow the entire map to be seen.

The 2D character and object sprites are very well done and detailed and reflect each of the factions cleverly. They were also smartly designed to fit different colors allowing the player to easily identify the characters at a glance, even in more populated areas of the game.

Even the arenas are well designed, allowing for interesting visuals with different paths for the characters to go through. The only problem that I really had was with the scrolling effect that was implemented. When scrolling too fast it would cause my eyes to have great difficulty following what was really happening.

The quality of the 2D assets is also reflected on the HUD, that is normally very easy to understand and follow through, getting to the point of adjusting whether you are playing it using the Joy-Con or using touch controls.

Unfortunately, I didn’t feel that this same quality was reflected in the audio design of the game. It isn’t as bad as that sentence may have made it sound like, but the game’s music is neither catchy nor memorable. It is not engrossing enough and can sometimes be off-putting, especially after a while.

You may be better off turning the music off and listening to other songs while playing, just like I did. However, the sound effects fit in nicely and illustrate the actions and the character attacks accurately, giving you a better experience.

Swords & Soldiers can be played using the Joy-Con, but the game takes full advantage of touch controls just like it did previously on the Wii U. Although the Nintendo Switch lacks the stylus used on the Wii U Gamepad, the touch controls actually feel much more precise and intuitive, while also supporting multi-touch, making it my preferred format and the definitive way of playing the game.

Adapting the gameplay that is normally in 3D to 2D was probably a challenge, but the developers rose to the occasion and delivered a nice version that is easy to control.

Many actions that you normally need to perform in normal RTS game, such as asking a unit to move and attack or going to a specific place to create new units, are streamlined to be automatic or to happen with the quick press of a button, allowing for gameplay that is much more fast paced and that doesn’t require constant scrolling of the screen.

To compensate for the reduced need of input commands to attack and move, the game introduces spells that can be used to attack, defend, heal or do massive destruction to the units, increasing the participation of the player in what otherwise would feel like an elaborated cut-scene with quick-time button prompts. This gameplay style was awkward at first but quickly grew on me, becoming familiar with it and really enjoying it.

The game is comprised of 3 single-player experiences and one multiplayer. The first is the ‘Campaign Mode’, which introduces 4 adventures, one for each faction, and features a story tied to that faction while slightly intertwining with the others.

Each campaign may last around one to two hours, depending on how well you get used to playing with that faction, which is nice since the stories aren’t all that exciting and are more a conduit for the battles themselves. Apart from telling a “story”, they also work as “pseudo-tutorial” to teach you what each unit and spell does, since they are gradually rolled out as the story goes. The execution is aptly implemented and can be fun at times.

The real problem is that the quality of the levels isn’t that well balanced throughout, resulting in some missions that are frustratingly bad as doing anything other than what the game forces you to do may result in irreversible failure since you are under-powered.

‘Skirmishes’ is the second single-player mode and offers you a chance to hone your skills with a specific faction as you play against an AI opponent. This mode can be very fun and the factions, difficulty and map can be chosen, allowing for an expansive variety of different matches while also allowing you to practice a specific scenario.

The final single-player mode is ‘Challenges’ and it is a series of 4 mini-game experiences that play relatively different, while also being tied to mechanics of specific factions. At first, these challenges are locked and you have to play the Campaign to unlock them. They are fun experiences at first, but after some time, you will probably never play this mode again, as the challenges don’t really change and the only thing to stimulate playing more is a local leaderboard.

In the end, multiplayer is what really shines in this game, allow you and a friend to battle each other in a variety of maps using your faction of choice. This experience can be very fun and can also test who is the best strategist while putting your friendship to the test.

On TV mode, each player can use a Joy-Con to play with the split-screen, which unfortunately allows one player to see the other player’s turf, losing some of the fun of RTS’s, but that problem is smartly solved, when playing in portable mode, as each player will get half of the screen, with the other players field being upside-down. This also allows for both players to use touch controls, since the Switch is multi-touch, which hands-down, produces one of the best ways of playing it the game.

Finally and unfortunately, this game doesn’t offer any online connectivity which is a bummer and could allow increased replayability with players even further and become more than an amazing local play experience, while also giving more meaning to the Challenge Mode.

Swords & Soldiers may not necessarily be the best game in its genre, but it is still both an interesting and amazing experience with some very enjoyable and clever ideas behind it. If you are into Real-Time Strategy (RTS) games and want a new take on it, Swords & Soldiers is a good entry point for you. Just don’t go into it expecting an online experience, just a fantastic local play one.