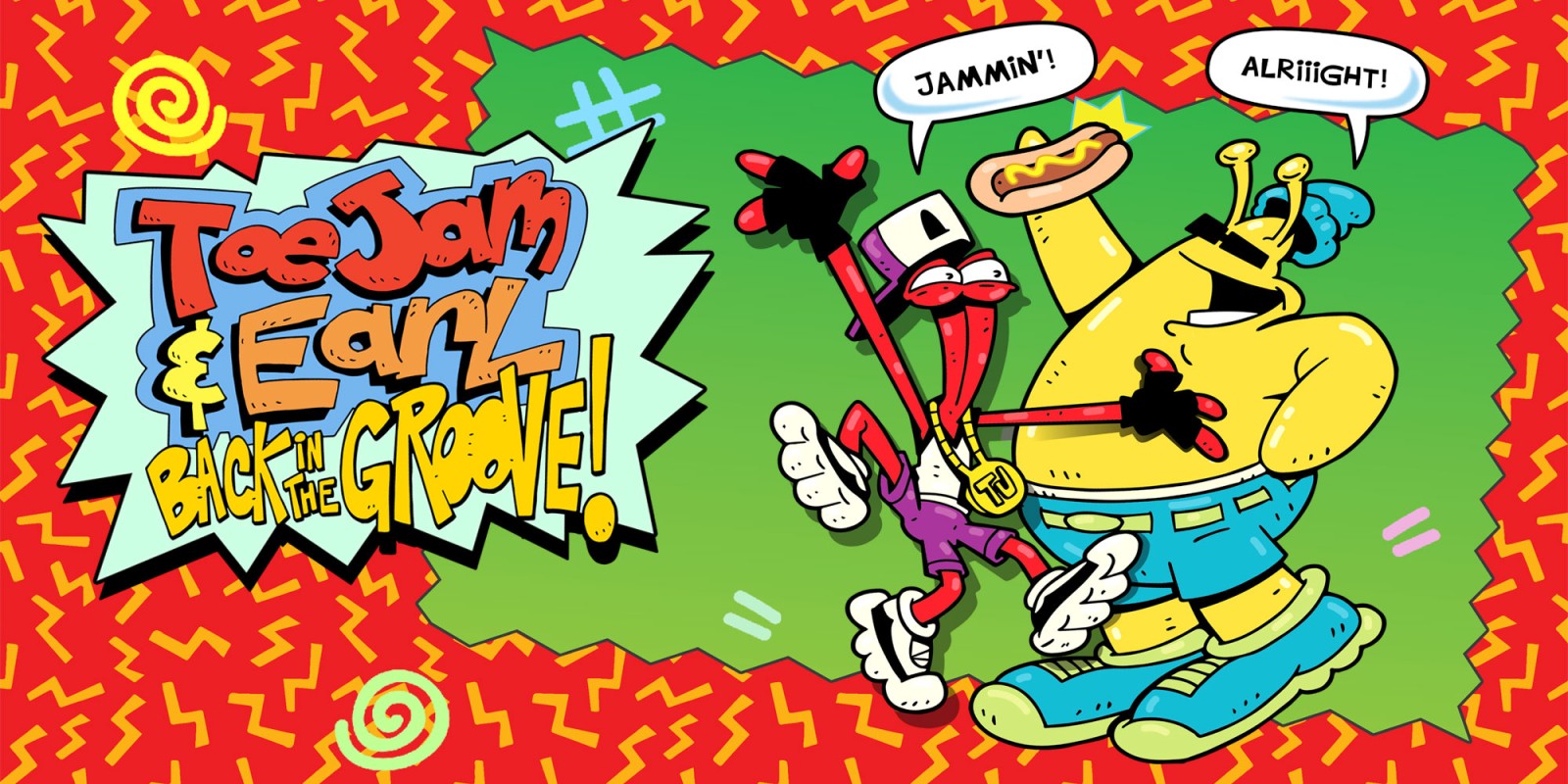 [Review] ToeJam & Earl: Back in the Groove! (Nintendo Switch)

It’s time to get groovy once again with ToeJam & Earl!

Crash Bandicoot. Spyro The Dragon. Bubsy The Bobcat. All of these are prime examples of iconic franchises from the ’90s that have recently seen a resurgence within the gaming industry.

It was only a matter of time before the dynamic duo of ToeJam & Earl would follow suit. The funk is real with this one, and the flow is as funky as it has ever been.

Before I get ahead of myself, I want to specify that I did not play the original games during my childhood. It wasn’t until the announcement of this reboot that I became acquainted with the franchise.

The series was overshadowed by the bigger franchises back then, and after playing through this game now, I can see some things that probably kept it from being as influential as the aforementioned games.

Jumping straight in, it feels like the duo never left Planet Earth. All of your favorite characters have returned and they look better than ever before. With nine playable characters, there’s a wide variety of play styles with returning characters and some brand new ones.

Each character (including the costumes) has differing traits to them, including unique special abilities, different starting presents, different speeds, life bar size differences, present/search skill, inventory size, and luck. New costumes are available for ToeJam & Earl, along with the classic outfits returning as a callback to the original.

All characters are voice-acted, with the introductory video giving us a brief look at what to expect throughout the game. Lewanda and Latisha make an appearance to kick off the story, along with ToeJam and Earl. The backbone of the story is that ToeJam has made it his mission to impress Latisha by showing her Earth.

However, instead of increasing the beats on the ship, Earl has accidentally created a black hole. The dynamic duo must find the pieces of Lamont’s ship and return back to space.

After a quick press of the wrong button, Earl has caused a black hole to be generated, sending the Rapmaster Rocket crash landing back on Earth. The main objective this time around is to collect presents and find the pieces required to rocket the team back to Funkotron, much like the original.

Making its grand return to the series are the randomly generated, stacked levels, which means that no two levels are the same. Toejam and Earl features three different level difficulties for all players to jump in and enjoy the game for what it has to offer, those being normal, easy farty, and toddler.

The game does feature a hard mode on top of the regular fixed game world, as well as a random world mode. Just avoid getting a game over otherwise you’ll be starting back from square one. Each level is wacky, full of creatures and unique presents, and are filled to the brim with objects to interact with.

In total, there are well over 50 distinctive Earthlings that will cross your path on your way to the rocket-pieces, some of which may be your biggest fan and some of which might be hula hoopers sending your character of choice to stop exploring and take a dance break.

Interaction with the world plays a huge focus throughout this adventure, as many of the objects in the world can be pressed and nine times out of ten, something will occur. There’s even the ability to swim across areas of water, however, swimming lowers the health of the player, which limits the amount of time you can swim.

Jumping back on land restores all lost health while in the water. Shaking down objects, such as trees or even houses, can cause money to come out. Finding money that is lying around can be used to buy food/snacks or to pay a meter, which can lead to presents coming out or to the uncovering of hidden locations.

Pressing buttons around the levels can also lead to a wide assortment of things to happen, including spawning useful things such as presents, or sometimes enemies come out and take some damage away.

Speaking of presents, what exactly do they do? Presents are this games version of power-ups, however, these can be used at any time, with all of them being useful in various conditions. Opening up the presents menu enables the player to use whichever presents they have at their disposal at any time.

Extra presents are available to be purchased at mailboxes, but there were rarely any times when During my playthrough there were times where I felt myself forgetting to use presents as they weren’t brought up enough for me to recognize their importance.

At the chance I would use presents, ToeJam would go flying off the stage causing me to have to complete multiple levels all over again. This is rather frustrating as some levels are less enjoyable than others, and having to repeat three levels at a time can be a slog at times.

There are over 30 unique and funky tracks (including some remixes on beloved favorites) scattered around the game, making it feel as though the player truly is back in the ’90s. Unfortunately, these tracks tend to get old fairly quickly and sometimes even annoying at times, as they start to sound very repetitive after a while.

The nature of the tracks isn’t meant for them to be masterful compositions, but some additional variety would have been appreciated. Besides playing the game just as a single player experience, there is the ability to play the game in two player split screen co-op.

These achievements range from small scale tasks to some larger more involved objectives and yet, they fail to bring any additional value to the game and there is little to no purpose of completing them all besides the completionist in us all wanting to complete everything the game has to offer.

On top of achievements, there are in-game collectibles that do bring value to the gameplay. Back in the Groove features a robust amount of collectibles, each yielding some special effects that can enhance the gameplay, sometimes even changing the complexion of the levels.

Once the player feels as though they have explored the level in its entirety, they can take the magical elevator to the next level. There are 25 levels to explore in this game, with the final rocketship piece being located on the last level. Once the experience meter is full, players may visit The Wise Carrot to receive a promotion, this games’ version of leveling up.

Ignoring the nostalgia, ToeJam & Earl: Back in the Groove has to be one of the weirdest and most interesting games that I have ever had the opportunity to play. It is less of a game and more of an experience, as you really don’t do very much that can be considered fun.

Sure, there are a few mini-games here and there such as the classic rhythm matching mini-game, but there are so few that most of the time they were forgotten. The whole premise of the game is to venture forward and find these ship pieces, but the game felt empty and bare bones due to the reliance of old mechanics and slower less involved gameplay.

This is not to say that this is a bad game, in no means is it bad at all, but the gameplay mechanics and overall concept seem to have a hard time shining in 2019. It struggles to find its identity and there were many times where I was hoping something more would come from the game, yet nothing came out and surprised me. It was just a consecutive stream of levels back to back that all felt too similar where nothing engaging would occur and stir up the action.

It’s definitely a game best enjoyed with another player, but even then it didn’t feel truly fleshed out as much as it could have been. Fans of the originals may welcome this new title to the franchise with open arms, however, it just didn’t do enough differently to keep me engaged the entire way through.