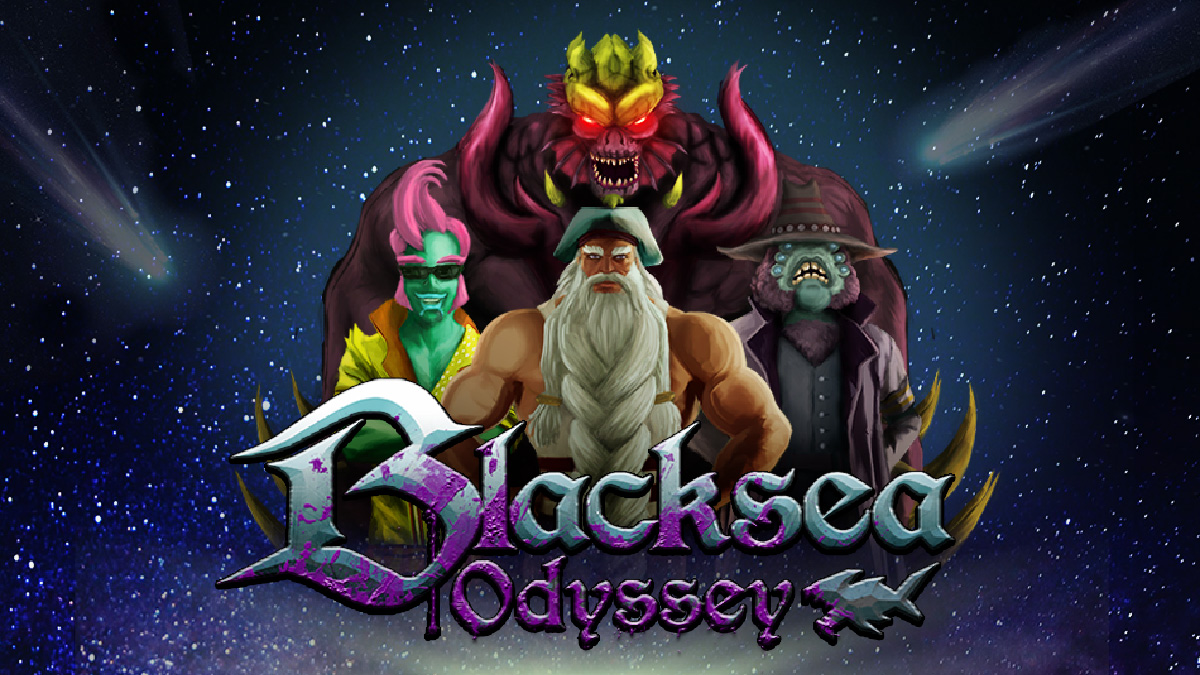 Spearfishing in depths of space.

While it might be a few centuries before the likes of the human race could ever hope to head off into the great unknown and hunt giant galactic monstrosities, thanks to the imagination of video game developers, we don’t have to wait for the chance to do it in a game.

First released in 2016 and available on Switch since December 24 of 2018, Blacksea Odyssey is a top-down space shooter, rogue-lite RPG that revolves around an epic hunt. Between space and time, there exists a vast chasm, where once every decade, the greatest of hunts, the Blacksea Odyssey, is conducted.

Still, where there is high risk, there is high reward and four competing huntsmen will stop at nothing to be officially recognised as the greatest huntsman in the universe and claim their chance to face a mythological creature that is so monstrous that the legends surrounding it, would have you believe that its wingspan can stretch across galaxies and its breath can actually consume black holes.  As for the name of the creature, it is the Titan of the Stars.

It is this premise that drives the events of Blacksea Odyssey, but since there are four huntsmen in total, all of whom can be played, provided you’re able to unlock them, let’s talk about a little about the characters shall we?

The first and default character you get to play as is The Old Man. A person who is said to be the “eldest human huntsman to roam the Blacksea” and compared to his competitors, comes from a bygone era where space huntsmen actually hunted for food and not sport.

He was also a formidable hunter who possessed great skill, but after a Titanfish ripped his arm off, although he continues to fish with a “regenerated bionic arm,” his skill has wavered and he wants nothing more to claim his lost glory and denied retribution.

Next, we have Rade “Crazy Eyes” Lawson, a heartless and cruel bounty hunter who had to grow up in the galactic frontier. When it comes to taking on jobs, money is never a question, but only the deadliest of jobs would do and because hunting humans got boring, he took up astrofishing. As for where the Crazy Eyes nickname comes from, it’s because of the bloodthirsty nature his eyes reveal when hunting.

From the lethal to the fashionable, the third hunter is Emerald Jones. When he was younger, everyone knew Emerald as Dexter and Dexter was heckled by all. When he was young, he really did have a tough time fitting in, but as an adult, he changed his name to Emerald Jones and became a hit in the fashion industry, whose Big Game Wearables clothing line, is comprised of suits, jackets and handmade purses that are all made from the skin of the astrofish he catches.

As for the fourth huntsman, Xezemoth is considered to be the foulest and cruellest among his species of “hyper intelligent reptilian creatures” that are well-renowned for their “imperialistic and carnivorous views of the universe.” Just in case that wasn’t bad enough, after being “tainted by the ghosts of the Neverrealm,” his wrath is exceedingly cruel and his hunger to spread evil is insatiable.

Know you know about the motley crew that helps drive the game, it’s time to cover gameplay and the four main features. As a game will roguelike elements such as procedural level generation, permadeath and the usual steep difficulty curve that comes with games of this genre, Blacksea Odyssey is a game that requires skill, not just to survive, but to emerge triumphant.

With the game consisting of 9 rounds and capable of being completed within 1 hour, just to unlock a very special spear, this is one omni-directional shooter that will ask a lot of you. The good news when embarking on hunts however, is although they can take place in one of four terrains (Tropical, Crystal, Desert and Abyss,) what you get out of them, is up to you.

You can either choose to fly around, engaging combat against any space beast you see, in the hopes they will drop plenty of credits or a key to open one of the many in-level chests, or you can just locate the boss, kill it and live to tell the tale, thus ending your time on that level and earning points based on your performance.

Only, while it sounds easy on paper, the bosses, even when on a difficulty of 2 can be a major annoyance when you start playing, so it is vital to learn their move-sets and reactions, to stand a better chance. Also, before you just dive into a level, you can get insightful data beforehand, such as how much of a bounty beating the resident boss will net you, how much damage they can deal, how many credits they can drop and more.

In terms of how to kill the bosses, or kill anything in the game, it all comes down to three things, spears, harpoons and runes. Spears are your basic weapon and each playthrough starts with you having to choose between those available to you (each one offering its own stats.) Spears can be thrown by using the ZR button, with the right analog stick being used to aim in their direction.

Spears are essentially your basic weapon that can be used over and over, whereas your harpoon is a weapon of great importance. Granted you will need to get close enough to use it, by holding ZL you can charge up your harpoon before throwing it. By having it strike an enemy, especially bosses, on their limbs or any weak point in general, you will be able to slow down their movements and once enough damage has been dealt to the harpooned area, you can then press ZL again and rip the limb/head/eye off and deal major damage.

As for the runes and their purpose, it’s all part of the game’s expansive customisation system, which is modelled off of games like Diablo. As you collect runes, you can equip up to four to your spear and another four to your ship. Depending on the nature of the rune (Fire, Attack Speed up, etc.) will determine the desired effect they will administer.

It should go without saying that the runes are vital to beating the game because they really are and if you’re really lucky, you will also be able to collect a fair few items that can be equipped to your L and R buttons and also help you out in battle.

In the event, you go an entire level without getting like an item or rune though, provided you have enough credits or are willing to sell what you do have, you will be able to buy various goodies from the shop, which can only be accessed between hunts. After all, just because you can skate by on the skin of your teeth, Elite Mode is not something to be sniffed at and nor are the enchanted enemies.

Not only can enchanted enemies be even bigger than the already gigantic bosses, but depending on the boss, some have enhanced health, damage and even speed, which means you’re going to want to be using your boosts (press the left stick in,) a hell of a lot more.

Other than all of the above, there really isn’t that much to Blacksea Odyssey, other than a bestiary and a tutorial mode for players seeking tips and tricks. Sure it visually looks appealing as space shooter, which fits in nicely with a lot of earlier arcade titles, even now the twin-stick controls feel a little too cumbersome and offer the game a bit of extra difficulty, where it wasn’t even necessary.

Despite a rich customisation system with plenty of various set-ups and larger than life bosses that will keep you on your toes, ultimately Blacksea Odyssey does feel like a very distinctive space shooter that is a bit too hit or miss for my personal liking. It’s a good game with a lot of great ideas, but unlike the enemies in this game, I don’t see it lodging its harpoons in me, any time soon.