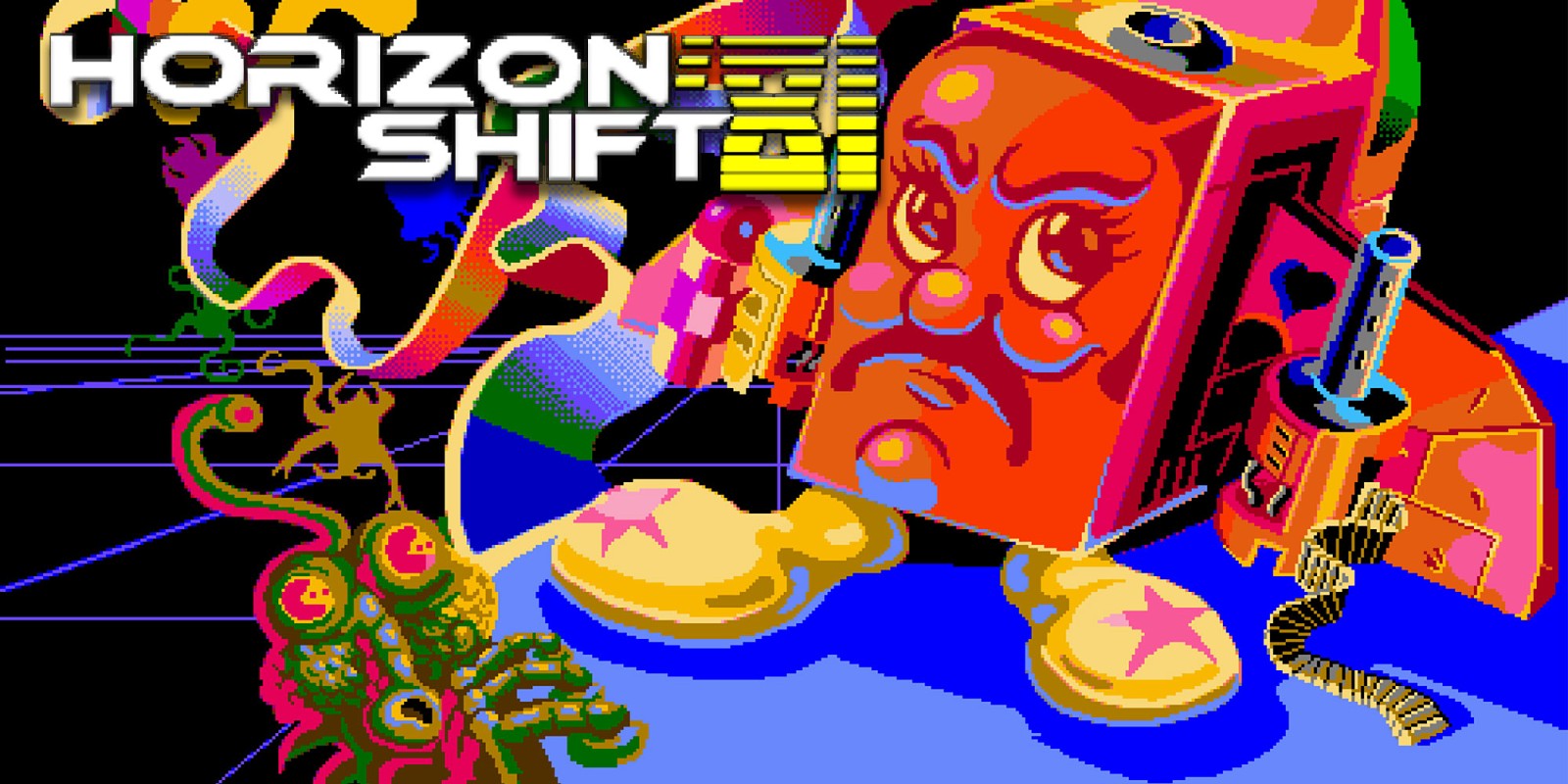 A sequel worth waiting for.

Back in 2015, inspired by the likes of Space Invaders, Galaga and retro Shmups in general, Paul Marrable (Flump Studios) released a fantastic little game by the name of Horizon Shift. With the Wii U being revered as a commercial failure and dev kits just being too costly, there was no reason to bring the game to that Nintendo platform, but a lot can change in 3 years.

With dev kits for the Nintendo Switch being far more feasible for indie devs to purchase and the Switch generally being a superior and more approachable platform, Horizon Shift has finally been only to make the Nintendo leap and it is no port.

Debuting as Horizon Shift ’81, the new instalment is in fact, a sequel to the 2015 game and it is a mighty fine one at that. Especially since said sequel has been made to support TATE, which means if you prefer to play your shmups in a vertical position, you absolutely can.

More than just supporting said mode though, the game act feels better when played in this manner and it works like an absolute dream if you happen to own a Flip Grip, regardless of how you choose to play. (Whether you hold the whole ensemble together in your hands and play in handheld mode, or have the Flip Grip set up on a table and play with a Pro Controller.)

Still, it’s time to get into the nitty gritty, so let’s do that, shall we? Being the Horizon sequel and shooter arcade game that it is, whether you are playing Horizon Shift ’81 in a horizontal or vertical position, each field of battle displayed on the screen, are divided into two areas, separated by a horizon line that is smack dab in the middle.

It is on said line, where players can find the ship in which they control and it is the line they must patrol, across the game’s 36 stages, players must do battle against an alien menace that will invade from above and below.

Should said threat land a lucky shot on you, or they eradicate the horizon line and box you into a corner and shot you, you will lose a life. In the event you collect one of the game’s few power-ups though, you will you be become more empowered thanks to having a shield, or the ability to fire rockets. Also, if you do fall down a gap, there is still time in which for you to flip your ship to save yourself.

Now, since the enemy can come at you either side, it is important to move around, so not only can players jump (press B) if they wish to save floating bystanders if they want to, but by facing upwards, your ship with be on the upper side of the line, whereas if you face downwards (dip the left analog stick down,) you will be on the lower side of the horizon line.

With regards to how to shoot the opposing force, it’s simply a case of holding either the A or the Y button, but when aliens do get passed you and land on your line, there is still time to perform a dash attack on them with the L and R buttons. Not only can killing multiple enemy ships give you more points when dashing, but during the act of dashing, you will be invincible.

Moreover, those points you earn will go a long way to filling the bar that can be found at the bottom of the screen. Once full, by pressing X, players can release a bomb that will deal a great amount of damage to all those present on-screen, in the event it doesn’t flat-out destroy them. It can also restore your horizon line.

Moving on, being the shooter that it is, the aim of Horizon Shift ’81, is to shoot down as many ships as you can and get as a high a score as you can, in between taking down the occasional bosses and unless you have some serious skills, you will die, a lot.

When you lose all of your lives, although you can continue from the last checkpoint, it comes at the price of having your current score being reset to 0 (don’t worry, if you surpassed your own high score, it will be unaffected.)

In terms of difficulties and content, Horizon Shift ’81 features an Arcade Classic Mode, Arcade Arrange, Speed Up, Hyper Mode and both a Free Mode and Boss Mode, although the last two will need to be unlocked.

Each mode offers a different experience, due to things like starting off with one life instead of three and levels getting much faster than they normally do in other modes. Once you do pick the mode you wish to play through though, you will get the option to select the difficulty and game speed that you want.

You will also be able to turn tutorial on or off, as well as changing the graphics mode to The Works, Arcade 81, Modern, Retro, Xtra Glow, Clean and Retro Clean. Should those graphic changes not be enough though, you can also head to settings to enable or disable HD Rumble, select your preferred sidebars and backgrounds, as well as flipping the screen for TATE mode.

One complaint that I do have however, is although there are a fair few customisable options, it would have been nice if more options could have been obtained in-game/been available from the start, as I feel these could have helped the game stand out even more so. Nevertheless, it’s still a throwback title that does in fact, try to grab those who play it, and drag them back to the past where this game takes its inspiration from.

If you’re looking for an arcade game that will make you feel like you’re still in the arcade, long after closing, Horizon Shift ’81 is that game. It’s engaging, the soundtrack is mildly compelling and the gameplay is exactly what you want for a shooter of this calibre, especially if you’re playing it with a Flip Grip.