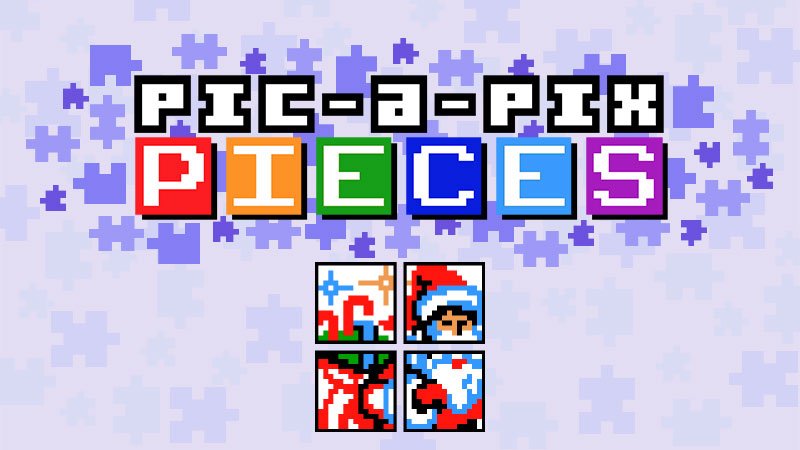 Pic-a-Pix Pieces is out Now on Switch

For those of you who have a fondness for puzzle games, especially those of a Picross-like nature, you’re in luck. Marking Lightwood Game’s first Switch release for 2019, Pic-a-Pix Pieces is out now on Switch.

Details regarding the new release can be seen here:

Staffordshire, UK – Lightwood Games are kicking off 2019 with the release of Pic-a-Pix Pieces, their latest picture puzzle game for Nintendo Switch, available from January 3rd on the Nintendo eShop.

Pic-a-Pix is a picture logic game, sometimes known as Picross, Nonogram or Hanjie, where whimsical pixel-art pictures are created by solving puzzles.

In Pic-a-Pix Pieces, large pictures have been split into a number of smaller pieces. Each piece is a puzzle grid, and by solving them all you’ll form a mosaic that reveals a spectacular final image.

Lightwood Games previously released Pic-a-Pix Deluxe on Nintendo Switch, and this game includes all the key features from the previous title, including the most recent refinements, such as touch-screen controls, co-operative play for up to 4 players and a flexible colourblind mode.

As with Lightwood’s previous titles, puzzles are designed by Conceptis, the world’s leading supplier of logic puzzles. The puzzles in Pic-a-Pix Pieces are an exciting new Pic-a-Pix variant, created exclusively for this game. Pic-a-Pix Pieces supports English, French, German and Spanish.

A free demo was released in December, featuring two sample Christmas-themed images. This will be removed from the eShop next week to make way for a new demo.

Lightwood Games will continue to support both Pic-a-Pix Pieces and Pic-a-Pix Deluxe on Nintendo Switch, with new monthly DLC puzzle packs throughout 2019.In fact, January will also see the release of Classic Puzzles 13 and Giant Puzzles 7 for Pic-a-Pix Deluxe, bringing the total number of puzzles available in that game to more than 2,500!

Pic-a-Pix Pieces will also be available on PlayStation 4 and PS Vita from January 8th.