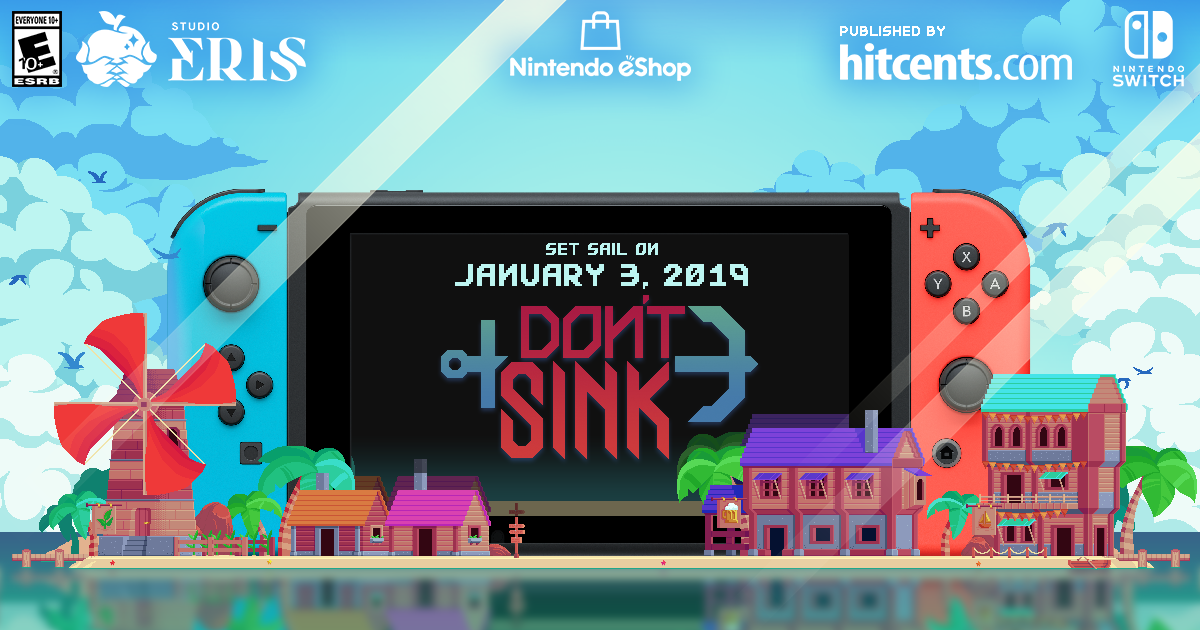 With 2018 almost over and 2019 already been proven to have plenty of goodness in store for the Nintendo Switch, it’s time to for one last interview and of course we just had to make it a Don’t Sink one.

Having released on Steam earlier this year and out on Switch next week (January 3, 2019,) Don’t Sink is an attractive looking RPG that is bound to make players go “Arrrr!” So, with Hitcents making themselves available during the Holiday period, we were given the chance to talk to Jordan Taylor and the Switch port of Don’t Sink and some of Hitcents future plans. Here’s how we got on:

In typical interview fashion, would you be kind enough to introduce yourself to our readers and tell us a bit about yourself, your background and your involvement with Don’t Sink?

Jordan Taylor: Hi all! My name is Jordan Taylor (@jtyeppers, if you’re brave!), and I’m the Studio Head here at Hitcents, an indie game publisher (and developer) based in Bowling Green, KY. My entire childhood is sprinkled with memories of playing any games I could get my hands on, and I benefitted from an older brother and sister who added to our stash.

Lots of Mario in all his iterations, heavy doses of Mega Man, Wario’s Woods on the SNES, Kings of the Beach really just because we had the cartridge, Rayman on my PSX. If I saw it, I would play it (even the terrible stuff… Bubsy). To this day, I still don’t know how I managed to boot up Kid Niki: Radical Ninja on our C64.

Despite my ever-present passion, I never really envisioned being able to work in the games industry. A few years ago however, I had the opportunity to join the team and really take charge of all things game-related. My day-to-day is rarely consistent, but a lot of what I do is working directly with the multitude of development teams we’re partnered with.

I actually discovered Don’t Sink about 8 months ago and decided to reach out to the dev team, Studio Eris, about what their plans were with it. Pretty quickly, we realized that the game would be a great fit on Nintendo Switch, and now here we are!

Don’t Sink in a Nutshell:

Miketendo64: For our readers who have yet to experience Don’t Sink, or heard a single thing about it, what is Don’t Sink and how does it play?

Jordan Taylor: Don’t Sink is an adventure-RPG at heart. It combines elements of world exploration and crew/resource management with a very neat battle system and loads of side-quests. Also, lots and lots of cheeky humor. I’m a sucker for games with clever dialogue, and Don’t Sink has it in spades.

Not to sound like I’m full of marketing shlock, but I’d be remiss if I didn’t mention the portability of Don’t Sink. One of the original reasons we wanted to bring it to the Switch is because it’s easy to play at home, on-the-go, for an hour or for five minutes. I think it’s common, especially with my age group, to struggle finding the time to play titles requiring multiple hours per session to invest in the story (I love you, Octopath, but my schedule is too full right now!) Lead dev Sebastian Nigro (@Seabass_N) did a great job keeping Don’t Sink as lightweight as possible.

Miketendo64: Having previously released on the likes of Steam back in April of 2018, when did the decision take place to bring the game to Nintendo Switch and how long did the game take to port?

Jordan Taylor: We actually first started talking back in May, right after the game had launched on Steam. The plan was in place for several months before they were able to start working on the port. YoYo Games had not yet released the Switch module for GameMaker into open beta (they were using Undertale to test and sort through major issues, I think), but once they did, the team was able to move forward pretty rapidly! The bulk of the work might have taken a month (primarily on Sebastian’s shoulders), with time on top of that spent isolating and squashing odd bugs that cropped up.

Miketendo64: Being a port, was anything needed to be sacrificed in order to get Don’t Sink working on Switch, or was it a straight forward affair?

Jordan Taylor: The biggest sacrifice I can think of right now is having to lose some water reflections. FPS was suffering as a result of them being in-game, so we had to remove them. It’s a shame because the reflections were a really nice aesthetic touch! Otherwise, the game is still 100% original and complete.

It did take a few attempts to pass the certification process; GameMaker’s export module wasn’t fully optimized at the time, so some hiccups were expected in terms of successfully passing all the individual Lotcheck guidelines. Silver lining is that we could pass back any oddities we encountered to the team at YoYo Games so that they could fix as needed, which hopefully helps other GameMaker titles coming to Switch!

Miketendo64: In terms of content, just what kind of manner of things can players expect to get up to?

Jordan Taylor: Right off the bat, players will make their own pixelated pirate. Want a pegleg? Check. Eyepatch for your missing eye? Check. Huge green pirate hat? Check. From there, you’re thrown into an open world (sea?) full of islands for exploring. Each locale is littered with NPCs and from those NPCs, players can pick from a slew of side-quests (take it from me, some are too dangerous to pursue until you’ve upgraded your ship).

Ultimately, with a little luck and many timbers shivered (I don’t even know what that means), each island can be conquered and players become Pirate King of the Universe. I mean, the last part is a bit of an exaggeration, but you will have to do some governing!

Miketendo64: If you had to put a rough number on it, how long does Don’t Sink take to beat and how long is it in general, to 100% complete it?

Jordan Taylor: I know everybody’s playstyle is different, so it’s hard for me to be confident in my accuracy, but I’d pin a full playthrough as coming up around 7-8 hours.

Miketendo64: Being the publisher responsible for bringing Don’t Sink to Nintendo Switch, what first drew you to the game?

Jordan Taylor: Oh, definitely the visuals and art style. The artist for the game, Daniel Marques (@i_am_thirteen) has done such an amazing job. I’ve had a chance to play it on my TV at home, and it looks so nice on a big screen. Bright, vibrant, charming (and I have a soft spot for pixel-art games, if that weren’t already obvious).

No HD Rumble for Don’t Sink:

Miketendo64: Does the Switch release of Don’t Sink feature anything that the Steam version doesn’t in terms of new content and Switch specific features, such as HD Rumble, touch-screen support and video capture?

Jordan Taylor: Unfortunately no. Because of the delay in their ability to work on the port, the dev team started work on a new title. Once the Switch module was released into open beta, we had to evaluate and balance workloads between the two projects.

For Don’t Sink, we wanted to bring the full game all at once, and spend time ironing out any technical creases that might have arose. What we lost is HD Rumble in Don’t Sink, but the upside is that the devs can allocate more time to implementing these Switch-specific features in the new game!

More to Come from Hitcents:

Miketendo64: After the release of Don’t Sink for Switch, what is next for Hitcents? Any chances of there will be a port or two of any of your other previous titles?

Jordan Taylor: I couldn’t tell you an exact number off the top of my head, but we’ve got at least 5-6 other games lined up this year [2019] alone for the Switch and other platforms (some are announced, some unannounced), and a few more titles lined up beyond that. It’s so exciting working with all our dev partners based all around the world (Spain, Chile, Japan, Czech Republic, here in the US). They are doing some fantastic work, and I think fans will be really intrigued when they see these games.

Recently, we’ve been investigating the Discord store to see what technical requirements exist to port there and if their userbase would be interested in our titles. Beyond that, we’re primarily focused on moving each of our projects forward for some exciting new releases! The plan is to showcase them at a few conventions this year, so find us there for some choice demo action!

EPIC 2 Crushed it on Switch & EPIC 3 is in Development:

Miketendo64: Given the fact that Draw a Stickman: EPIC 2 released on both Wii U and Switch, how did the Switch release do in comparison? Is it enough to warrant developing a Stickman game just for Switch?

Jordan Taylor: The Switch release has absolutely crushed the Wii U’s numbers. Currently, EPIC 2 on Switch has sold over 10x as many copies as the Wii U version. In terms of future Stickman titles, we do have plans for EPIC 3 to be a multiplatform launch (the marketing team is gonna scold me for subtly announcing EPIC 3, hah!).

Miketendo64: It will be our and our readers, little secret. Haha

Jordan Taylor: I’d encourage everybody to follow us on Twitter (@hitcents) and join our Discord (discord.gg/hitcents) because that’s where we like to spill secrets and such about upcoming games, announcements, etc. I’m extremely excited for the next year-plus, and all the credit goes to the amazing game devs we’ve partnered with!

The Miketendo64 team would like to extend our personal thanks and gratitude to Jordan for making himself available during this festive time. We hope you and your team have a happy New Year and look forward to checking out your 2019 offerings!