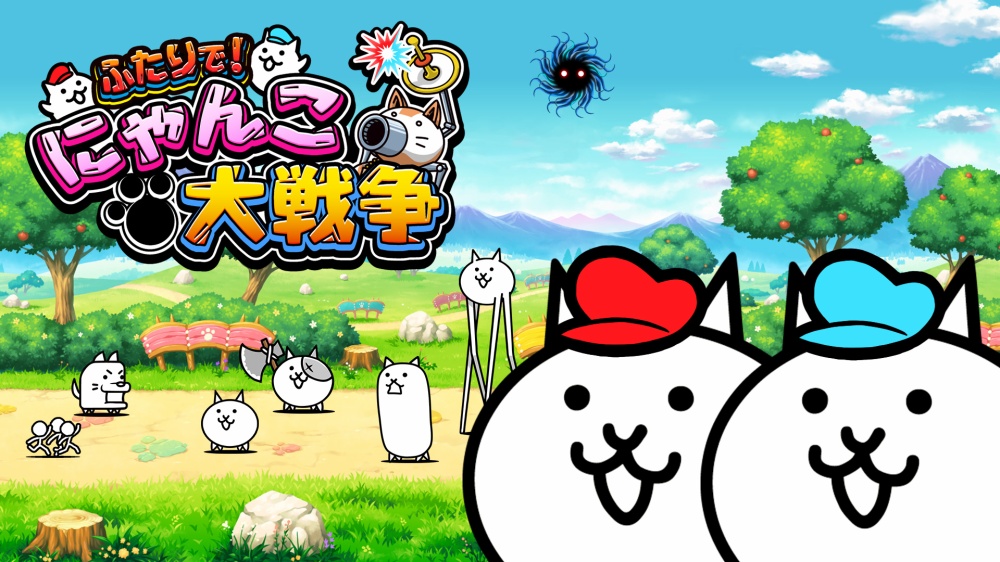 The Battle Cats – or Nyanko Daisensou as it’s known in Japan – is an incredible success story with over 39 million downloads on iOS and Android and over 600,000 on Nintendo 3DS (where it is the best-selling eShop only game in Japan). The cats have now made it onto Nintendo Switch as Futari de! Nyanko Daisensou.

Already holding the distinction of being the game that knocked Super Smash Bros. Ultimate off the top spot in the Japanese eShop charts, the new Switch entry adds a co-op play mode, four mini-games and the limited Neko Brothers who are only available until February 14, 2019.

So what is The Battle Cats? Reducing it simply to ‘Tower Defence’ only paints half the picture as PONOS have put more emphasis on ‘Tower Offence’: you build up an army of Battle Cats in not only taking over the World but the entire Solar System.

You play from right to left with what is just a small base to begin with and similarly a small selection of cats to choose from. As the battle progresses, the money on the top right goes up, which you can then spend in-between battles to upgrade your cats, cannon and so much more.

The enemies too are initially fairly basic with stick men and white dogs to contend with. As the game progresses, so does the level of competition with an increase akin to Tetris for the first few stages then also akin to Tetris’ level nine when the first of the red enemies appear. Upgrades are where this game excels where you can buy more -and upgrade existing- cats, improve your tower strength, boost your cannon attack, range and charge, increase efficiency, your wallet, production speed, money earned, XP received and so forth.

Similarly to Pokémon; your cats evolve when they reach a certain level into a new form, for instance, the standard Cat looks like he’s taken a cycle of steroids and becomes the ripped Macho Cat with his health points and attack power both increasing by 700%. Up to 10 different types of cat can be taken into battle which adds a whole new strategic element, as the cats all have different strengths similar to Super Mario Kart or a classic fighting game (fast but mid-strength, slow but super- strong, quick to produce but weak, ability to fly etc etc).

Graphically the Switch entry doesn’t look any more impressive than it does on an iPad Pro, but is as expected, a great improvement for those upgrading from the 3DS version. The characters’ aesthetics however do have a timeless appeal with their unique appearance and all-white colour.

These cats designs aren’t quite as cute as Pikmin however, but this isn’t inherently a bad thing as both games inevitably feature mass deaths in order to help the greater cause of defeating the enemy units, thus the subsequent feeling of loss to the player isn’t as great.

The controls in Futari de! Nyanko Daisensou are simple enough: the left stick and control pad both fulfil the same function of moving between which of the 10 cats to send into battle (the cats movements are all automated), with the ‘A’ button selecting the chosen cat to send, ‘L’ operating the Worker Cat (who increases the money level needed to reproduce the cats), ‘R’ operating the Cat Cannon (which takes some time to charge), ‘X’ summoning God (see below) and the right stick controlling the camera allowing you to zoom in and out of the action.

In exchange for Cat Food (another of the in-game currencies which can be earned by meeting certain requirements), God can perform four Miracles including the ‘Wrath of God’ (which deals great damage to all enemies), ‘God Bless You (which sends enemies back to their base), ‘Healing Oasis’ (which heals both your cats and base), or the ‘Baby Boom’ (which allows you to send out all cats for one minute – the money used to send them out is still required however).

The main game in Futari de! Nyanko Daisensou should only take a couple of hours to complete with 48 levels on offer. The amount of post-game content is incredible however with possibly over 100 hours if you want to clear every stage and unlock – and upgrade- every cat. The four mini-games (mole whacking, light gun shooting, relay racing, and catching the falling cats) are a nice touch, giving you some useful rewards, but none of them are a deal-breaker.

With regards to how playable is Futari de! Nyanko Daisensou if you can’t read Japanese? The basic gameplay is self-explanatory enough and most readers of Miketendo64 should be able to pick-up-and-play.

The only Japanese needed (and this is an integral part of the game) is in the upgrading – unlocking new cats with your XP is obvious, what all the other icons do is not necessarily so. The icons are the same as the iOS/Android version which is available in English and is free-to-play (with in-app purchases, which the Switch version does not have).

To quantify just how good Futari de! Nyanko Daisensou is, requires a re-evaluation of what constitutes a great game. It certainly is unconventional in its almost disregard for traditional classic video game mechanics, but instead delivers a gameplay experience where addiction is the requisite element. PONOS feed the player enough cats, upgrades and stages to enforce this addiction, and to make it not only perhaps the best Japanese-developed eShop game, but good enough to rival some of the very best eShop games that the west has to offer.