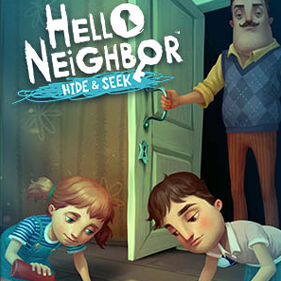 Get ready to go back to before the events of Hello Neighbor with a little game we like to call… Hide & Seek.

Developed by Dynamic Pixels, Hello Neighbor: Hide and Seek is a prequel to Hello Neighbor. The original game saw success on Steam but relatively mixed reviews on consoles. Hide and Seek aims to expand on the story of the first game by giving players a look into the events that led up to it. The Neighbor has just learned that his wife has been killed in an accident and has to raise his two children on his own. The Son and Daughter named Aaron and Mya, decide to play a game to take their mind off of the grief. The game is hide and seek, which starts out as harmless fun but soon takes a dark and peculiar turn with the brother becoming more aggressive towards his little sister.

Instead of being a nosy boy snooping around the house of the mysterious Neighbor. This time around you play as The Neighbor’s daughter called Mya. Mya and her brother Aaron are playing Hide and Seek with a bizarre twist. Rather than running around the house like in the first game, the rooms of the house this time, take on a more whimsical appearance. The furniture is enlarged to giant proportions, the room itself has expanded beyond reasonable sense to mirror a child’s imagination as they fantasize about exploring a jungle, playing cops and robbers and the like.

Graphically, there is hardly any difference between this game and the original. Hello Neighbor: Hide and Seek, much like Hello Neighbor, has a cartoon animation aesthetic. The game seems to run reasonably steady both in Handheld and Docked mode and there doesn’t seem to be any change in resolution either. The music is nicely done and matches the tones of the game as it starts off relatively cheery and descends to become dark and sombre.

Hello Neighbor: Hide and Seek is a first-person stealth/puzzle game that has players control the sister, Mya who has to collect enough objects and stash them before the brother finds and catches you. There are five different levels that are based on different themes. Each level after the first must be unlocked progressively and can only be unlocked after the previous level has been completed. The first level for example, is Safari themed and Mya has to hunt around the room to look for stuffed animals and put them in the cage at the far end of the room.

Don’t expect to be able to play through each level quick and easy though as there is a lot of restarting if you get caught by the brother. You can lose some of the items you were holding at the time and even some of your hard earned bounty, be it the stuffed animals, bags of cash, etc. If you accidentally drop or throw an item, it won’t spawn back to where you found it if you get caught. It will just stay where it landed when you discarded it and sometimes, trying to get it back can be a devil’s job. Especially if there is a giant turkey next to it that calls out to the brother every time it spots you.

Most games these days have some kind of tutorial so you can learn the ropes, not Hide and Seek though. Once you get caught enough times, you can eventually use a tips option in the settings but only it points out the objects you need to get. It doesn’t tell you for example, that by putting rocks on top of the geysers, you can get more height off of other geysers.

From what I managed to learn by attempting to play, the Joysticks control movement. The R button is the action button and is used to interact with objects like stuffed toys, doors etc. The L button allows you to use the item you are holding and you can carry 4 items to your inventory. To show your inventory, press the X button and you can select which item you want to use on the directional buttons. The ZL button it the run button. This is perhaps the most useful of all buttons as you will most likely spend the main duration of your playthrough with your finger glued to that button as you are constantly trying to outrun the brother.

I think I have become too accustomed to games these days that try to ween you into playing them, they start off with a relatively easy difficulty arc that gets progressively harder as you continue playing. Hello Neighbor: Hide and Seek does no such thing and throws you right off the deep end. I can respect that but by task loading players to do too much straight from the get go can alienate the players and quickly lose interest. The cut-scenes are nicely done and perhaps would have served better of being an animated short film as the story is quite intriguing. The actual gameplay seems to serve more as filler to the story as opposed to the cut-scenes being filler to the gameplay.

I had heard from many sources on the internet that Hide and Seek is considered as being overpriced DLC packaged as a new game. I myself think that it has it’s own right to be its own game but I personally wouldn’t pay $29.99 for it but there are plenty of other people who would disagree with me. Hello Neighbor was a hit on Steam and sparked much interest through Twitch Streams and YouTube videos.

Hide and Seek on the other hand just doesn’t do it for me and I kind of wish it did. Unfortunately, With the busy lifestyle I live, I don’t have time to pick up and play this game when I like. I would constantly lose focus of what I am supposed to be doing and forget what the last object I had picked up. More focused around long periods of play rather than short bursts.