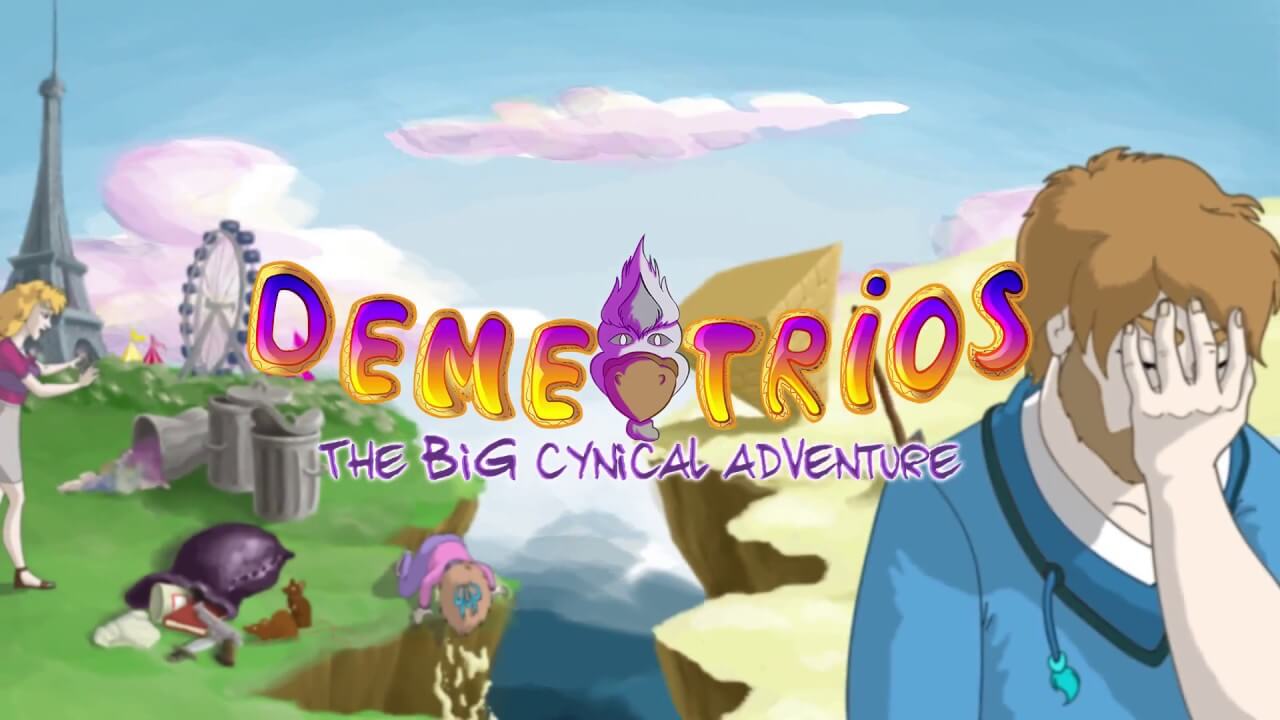 When the developer team introduces their new baby, a game they put a lot of work and love into, the least you expect to read is that you are up to a “Journey of an Idiot!”. Fabrice Breton, the owner of Cowcat, isn’t taking himself too seriously and with that, he represents the own protagonist of his game, Demetrios – The BIG Cynical Adventure.

Bjorn Thonen is the kind of guy everyone has met before. Unreliable, chaotic but a blast to hang out with. It is horrible to work for such a guy, but thankfully our (anti-)hero is working as an antique dealer in Paris and is, to nobody’s surprise, not that successful in his profession. Nonetheless, Bjorn gets dragged into quite a rollercoaster ride of an adventure that is not completely his fault… for once!

Both you and Bjorn are my guest to lay back when I say “Regarde-moi faire!” (Look how I am doing it!) and report about my experience playing Demetrios – The BIG Cynical Adventure for Miketendo64!

The first impression Bjorn the player gets is representing his whole lifestyle: He was coming home drunk, probably done something crazy while drinking one beer after another and… got into trouble. He is the typical unlucky fellow who gets dragged into a precarious situation more than he deserves. But that night is different for the chaotic antique dealer…

Walking home Bjorn gets a nasty struck on the back of his head, causing him to collapse. The phone call he got before from someone with good intentions got taken too lightly into account. Probably thanks to the generous consumption of alcoholic beverages Bjorn had before!

The next day is not as sunny as the weather outside in Paris, especially as Bjorn recognized that two crimes happened last night. The failed attempt to murder him and the theft of a valuable ancient stone tablet!

Unlucky you, because you are stuck with that dork to solve the mystery of who wanted you dead. On this adventure, you will not only bring Bjorn but also his neighbour Sandra together with her irritating daughter Caroline on a trip you will never forget. I’ll promise you that!

Demetrios – The BIG Cynical Adventure is a typical Point & Click adventure, so our main task is to find things, combine them and do ridiculous tasks for people you encounter. With a crazy title like this, be prepared to go around and solve puzzles even more abstract than in other titles  and you hear this from someone that once needed to get someone’s dreams back by crushing some mushroom cookies in a herbal gift bag. This package then went into the microwave and then… Well, you get the point, right?

Finding clues in your environment is rather straightforward and uncomplicated. The player can choose between touch controls and the controllers. I preferred the touch controls because it was simply faster and easier to move around. Moving the right stick to the desired location can be rather tiresome. I think every reader can relate to that in a Point & Click, right? The possibility to make the cursor move quicker is given as a choice by using the left stick, though. ZR/ZL can be used to accelerate.

Zooming in is easy and a nice feature to find some less obvious hidden things in the world of Demetrios – The BIG Cynical Adventure. Simply press your finger on the screen, blink for a second and the part of the screen gets bigger. It looks just like someone would magnifying glass for you on that location of the screen.

With a touch of the B button, the inventory pops up. When in it, use the D-pad and push left or right to scroll through your belongings. Y shows you the hotspots, X opens the menu bar and A is the ultimate button to confirm things. As an alternative, you can touch the little bag on the left bottom of the screen for your inventory and the house on the upper left to open the menu.

The content of Demetrios – The BIG Cynical Adventure is surprisingly rich. Besides the main story, you can also do a ton of little other things. The game stores a lot for the player, especially for the collector in you. Tons of cookies are evenly spread – every screen contains exactly three for you. Sometimes they are pretty obvious to find, but some of them need you to investigate like Sherlock Holmes to find them.

Talking about those cookies made you hungry for the explanation why they are there?! Well, they are used to boost Bjorn’s brain and give you a hint what to do next. Do not underestimate the power of sugar! It might help or kill you…

Speaking of killing, Bjorn can die or locked up countless times in the game. You can unlock a lot of achievements but collecting ways to get a game over is probably the biggest task if the player is up to it. Do not be afraid to run into traps, the dev team of Demetrios – The BIG Cynical Adventure had a clever solution built into the game. There is no penalty if you get a game over and it automatically resets you at the point where you left of. No data loss, you can just proceed as nothing happened to Bjorn.

A nice quirk of the game is actually that after you died, the main character learnt from his misfortune and will prevent to do the same action again. Be my guest and try it out, the monologues were funny to read as much as the little mini-games you could try out in COWCAT’s title.

Only focusing on the main story, you got six chapters to play with approximately 8 hours of content. The story is so weird you want to know what is up next and you can even select how much toilet humour you want to experience throughout the game. I liked that I was given a choice and, as much as the game embraces his strange style, considered other people’s taste in that regard.

Demetrios – The BIG Cynical Adventure provides you with hand-drawn art and as much as I appreciate the effort made, it does not suit my taste at all. Translating the style into the whole picture makes it highly suitable, though. How? you ask? Well, the whole universe in this game is ridiculous and a wonderfully drawn main character, as well as beautiful sidekicks, would be out of place and not fitting the message of it.

The soundtrack was quite alright when nothing really stuck to my head. It was enjoyable to listen to, but somehow bland at the same time. Sometimes I turned the music down because of the lack of variety and long hours of playing made me tired of it. This is not in any way a con, though. I am just really picky and sophisticated when it comes to game music. Sound effects were on point and hearing Bjorn throw up was more realistic than I had wished for.

Often highlighting the humour in the game, I also have to admit it can be both a pro and a con. This crude comedy sure isn’t for everyone and if you are not into toilet humour, you certainly will not enjoy the concept of this game either.

Along with the humour, the story fell a little bit flat. Of course, it was weird and unique – sometimes it felt a little bit too odd. Forced even to be precise. I can understand that attempt to stand out, though. In 2016, when the game originally released for the PlayStation Vita, the massive additions for the long-forgotten Point & Click adventure library proved everyone wrong who thought that genre is dead. So, to stand out, you must be the golden peacock amongst the pigeons. That was the feeling that stuck with me while playing Demetrios – The BIG Cynical Adventure.

From the wide world of video games, I have to admit that Point & Click adventures are one of my favourite ones. I enjoy the aspect to read a lot of dialogue as well as investigating and thinking outside the box. Being insensitive to toilet humour is something that played into the favour of the title I have reviewed, too. I enjoyed the story, even though it was kind of predictable at some points as well as flat and felt rushed at the end. I appreciate the attempt to be different, but I also know that not everyone will agree with me here.

Demetrios – The BIG Cynical Adventure is an enjoyable title. Especially if you consider the length of the main story and the many things a Point & Click title offers you to discover. I do know that the toilet humour, even though you can regulate it, won’t be for every fan of the genre out there. Yes, I know, I have said it a few times before, but I cannot stretch this aspect too much here to prevent interested players’ disappointment. The adventure was fun, but I cannot see myself getting back to the title to experience getting a perfect achievement list and missed game overs since the ending was not completely satisfying. Although it is indeed a strange title with some flaws, the port for the Switch is well made and still a good deal for $9.99!