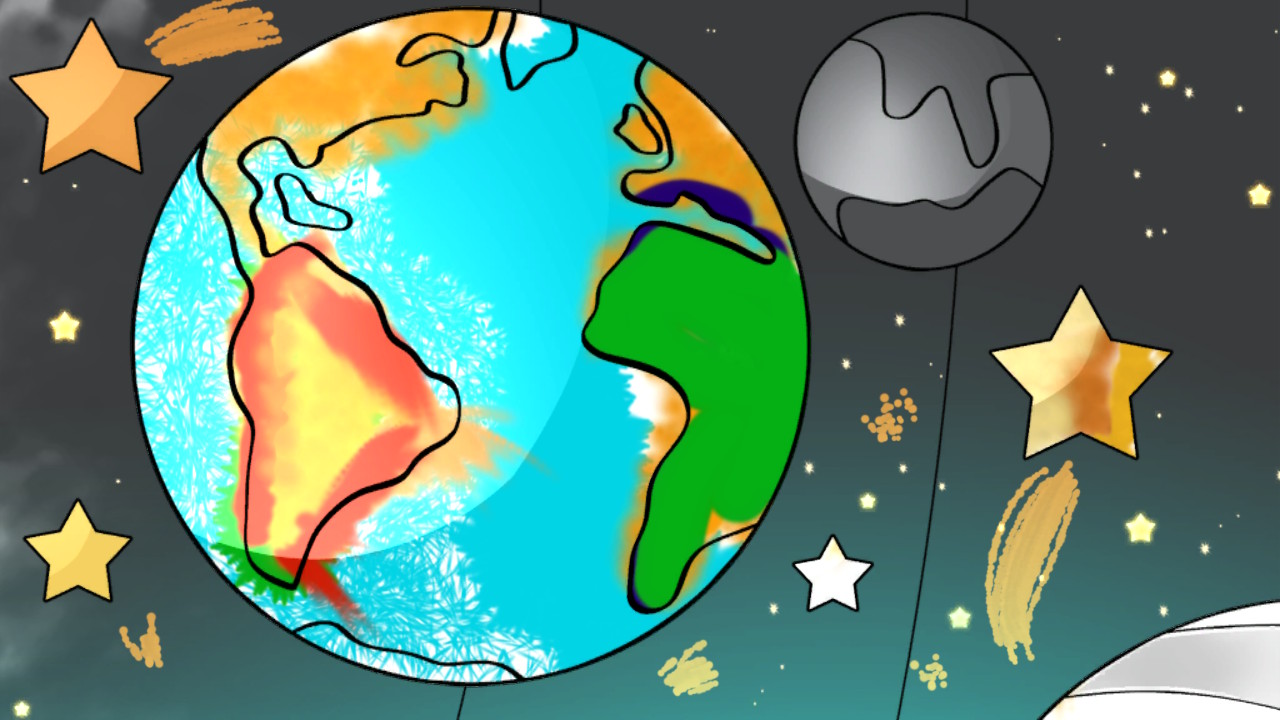 Coloring Book is a free app that you’d expect to find on a smartphone or tablet to hand over to your child to keep them busy. Along with the free illustrations that are there for you to color, there is a $4.99 (USD) add-on that you can buy that adds 36 pages to color in the various categories.

There isn’t a story within Coloring Book nor was I expecting one. But Coloring Book does give you some variety in its category selection, albeit the standard fare of Jungle, Space, Dinosaurs, Cats, Girls Room, Farm, Construction Site, and Ocean themed pages. Within each category, there are six illustrations which you can color and save to your Switch’s image album to later upload and share with friends.

One main aspect to be aware of within the Coloring Book application is that you will need to play in handheld mode. The game itself is all touch-screen controls, with some selection, navigation, and show/hide the UI controls done with some button presses.

Your main input device will be your finger, therefore Coloring Book feels more like finger painting than say using a crayon or marker. I did test out a theory of using a rubber tipped stylus, one found on the end of a pen I have. It worked, though not without the caveat that the touch screen of the Switch or maybe the Coloring Book app itself wasn’t as responsive when using the stylus tipped pen.

Within the coloring of each page, you have a variety of tools at your disposal. There’s a spray can, some brush types, a paint can which filled areas much like the paint can you would find within painting programs on a computer, some fan-like brushes which gave textured effects and a few other.

The paint itself didn’t have much of a blending capability and I found that each tool would just color over the previous colors I laid out. There was little opportunity to be had in making a color blend or trying various shading techniques you would have in traditional real world artwork or higher end applications on a tablet device like the iPad Pro.

Along with the tools, there is a color palette which lets you choose from nine colors: blue, purple, red, orange, teal, yellow, fuschia, green, and black. You also get various saturations of each from their fullest darkest level to added levels of white within the color family. 81 colors is not a lot and since blending isn’t really a part of the Coloring Book application there isn’t a lot of room for creativity within each page you will color.

There are music and sounds within the Coloring Book application but they were repetitive and annoying to me. I quickly turned off the sounds and just played without the drone of the repeating song, maybe there were more than one, but they just droned on in my head and got old fast. I didn’t experience any issues or hiccups within the game itself. It is a simple coloring book and there isn’t a lot happening other than putting color within the lines of some simple illustrations.

The drawings are cutesy, and I know I am not the target audience, but as an adult, and as an adult with kids, I would say Coloring Book is one of those “why is it here” type applications you will find in the eShop. The application is free and you get a few illustrations which, if you are curious you could at least try it out. I doubt many of our readers will find this to be engrossing or engaging, but Coloring Book doesn’t aim to be that.

For what it is, a cheap fix for a younger kid to color some illustration, it does its job. But it doesn’t do more than that. After a few moments of coloring, my eight-year-old daughter had moved on and was bored with it. She would rather play Pokémon or Splatoon 2 than be bored in a so-so attempt at a Coloring Book game on the Switch.