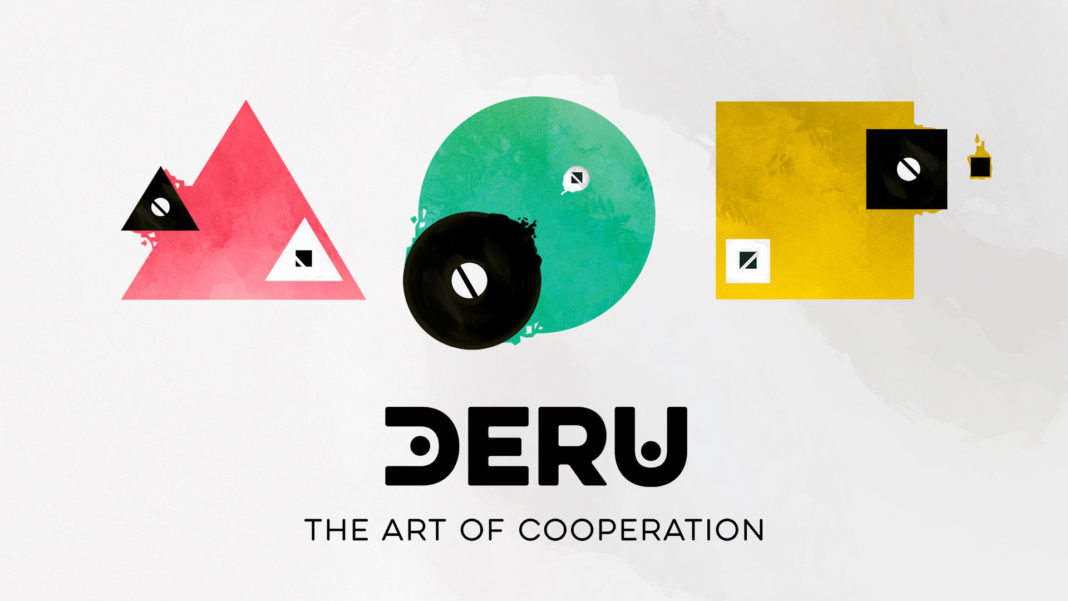 “It takes just a few shapes to make a puzzle sometimes.”

Deru – The Art of Cooperation proves that over the top graphics are not necessary to create a good looking video game. The Swiss developers of Ink Kit created a puzzle game with an uncommon twist by using simple abstract art. The player can be challenged alone or in co-op mode.

The only “story” that Deru is telling is one tale about cooperation. Even when alone, the little shapes you use are dependable of each other when reaching their goal. Sometimes obvious, sometimes cleverly hidden behind obstacles or even moving… You need to plan ahead and always keep your cool.

Keeping your cool in a puzzle game can not only be asked after a longer play session. Oh no, Deru – The Art of Cooperation was able to challenge me in that regard in many other ways, too. I will dive into detail more soon but allow me to explain how the game is played first since there is, and that might not be a surprise, not a real story behind it.

The main “protagonists” are coloured in Black and White. Starting off as triangles, the shapes can vary into other ones in later stages. Controls are simple, but I admit that I had often problems with them because I am not capable of using my motor activity well. Using the left stick, the black character will move, while the right stick is used to manoeuvre the white shape. Moving both of the shapes into the set goal on the screen by avoiding obstacles is the main objective in each level.

Your “characters” change in each world and gain new abilities. Both black and white shapes can transform by reducing or gaining size. Starting this action is caused by pressing L (decrease) and R (increase). The controls there work vice versa depending on which of both shapes you made bigger and which is smaller. Careful though, when you will change the one form of a character, the other one will reduce its size and therefore more vulnerable.

Why vulnerable? Well, you can die in this puzzle game. How? By mixing up your colours. Seriously, it happened to me more than it’s not shameful. The obstacles you encounter in the opposite colour are harmless to you, but the same colour is deadly. It sounds so easy in theory, but you can mix it up quite fast when playing. The player often needs to block, for example, a white line with the black character to make room for the white figure to cross.

Anyone playing Snipperclips on the Nintendo Switch before will experience the same phenomenon in Deru – The Art of Cooperation. When you play with another person in local co-op, communication is necessary to survive and come up with strategies that make you reach your shared goal. Share your Joy-Con with each other and you are good to go! Beware though, the controls change in co-op mode.

It makes sense that every player has his own character to control. While changing size was the task of the shoulder buttons in solo mode, the X button and the corresponding right button (when holding the controller horizontal) take that role up in two-player mode. You cannot freely make the figures bigger anymore. For example, White (Player 1, blue joy con) is big, but black (Player 2, red -Con) needs to increase in size.

Player 2 with his red Joy-Con can press the X button for an eternity, but won’t be able to get any mass from Player 1 who holds the blue Joy-Con. This can and was a problem for me and my partner in hectic situations. I could not react fast enough while the other player might have could and we both faced defeat and had to start over again.

With five worlds in total and approximately 13 level or more in them, Deru – The Art of Cooperation has a lot of challenges to offer. The game “shares” these level, though, meaning if you have beat level five in world one by yourself, it will also be beaten in co-op mode and vice versa.

This can be both a pro and a con at the same time, depending on how someone might consider it. I actually saw it as a pro if you cannot solve a puzzle in single player mode, as you can try again with a friend or your significant other.

The visuals are mostly puristic and can often remember you on an abstract painting. It is nice to see the different colours playing in the background with each other and building a coherent composition to the Black/White shapes you control. It is not the best looking title on the Nintendo Switch, but it is gorgeous and enough for its genre or purpose.

When receiving Deru – The Art of Cooperation, I personally did not expect an award-winning soundtrack. After playing for a few rounds, I wasn’t proven wrong. It can be difficult to accent a puzzle with music since it should not be distracting. At the same point, it should entertain and not be annoying in the long run because let’s face reality here, you will not likely breeze through all of them in your first attempt.

So, the tones in the background were there, but I quickly muted my Switch to focus due to lack of variety. To symbolize the danger of an obstacle the title from Ink Kit contains sound effects that only remind me of electricity.

With the charm of a fly surrounding your head for ten minutes straight, it added to me shut down the tone completely. To put it frankly, it was simply annoying when you had to block the way for the other character and listen to that buzzing until the other shape (or player) had crossed the path. Although I also understand adding a tone, since it would be less threatening without it.

The developer was able to make you feel challenged, but sometimes I felt the steep of difficulty was too much. Although, I am aware that all puzzles are solved differently from player to player. So the ones I might find frustrating and spent several attempts on actually could be finished by someone else after few attempts.

Especially annoying for me was the level “Chess”, the fifth one from world two. You have to time your movement like a Swiss clock (haha, get it since the devs are from Switzerland?) to succeed.

The controls are simple and it is on yourself not to mix up the colours, but I had a problem with the characters slightly moving after letting go of the analog stick. They somehow slid a bit more than I wanted them to sometimes, creating the feeling that they would be ice skating directly into a deadly obstacle.

Deru – The Art of Cooperation is a charming little game for puzzle fans and people that enjoyed Snipperclips and want something that is like a more dry, maybe adult-like version of it. I had fun playing the title, but the amount of frustration and fun basically outweigh each other. The cute little feature of playing the game in English, German and Swiss German was adorable and a homage on the dev team that made me chuckle on discovery.

Supporting Indie games and an Indie developer is always something I strongly suggest. Although, as much as it hurts me, I cannot wholeheartedly recommended Deru – The Art of Cooperation because I often played it for the sake of reviewing it. The fun in the game was sometimes crashed in a blink of an eye; just as much as it took to be set back to the beginning after your character got erased by a line or other obstacle.

A few levels were painstakingly hard in both single player and coop, while others took only one attempt. Such things are natural, but the laugh I had in Snipperclips when something went wrong quickly ended in an annoyed sigh together with a tight grip around my controller in Deru – The Art of Cooperation.