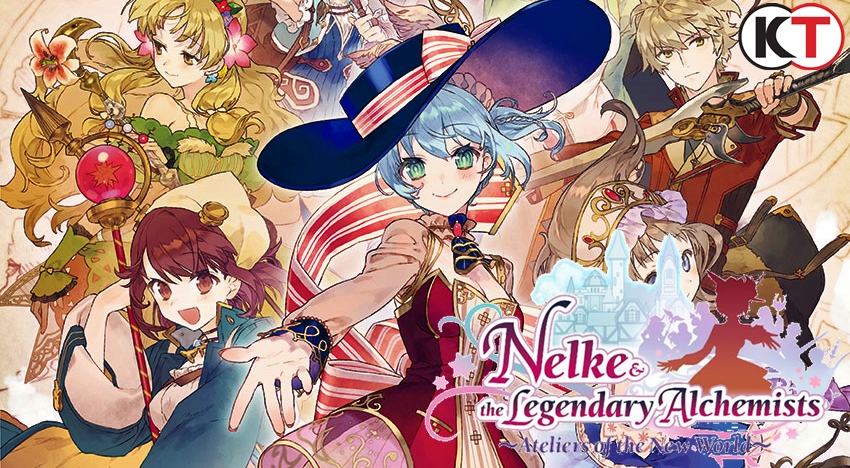 [Interview] Hosoi, Kikuchi and Nelke & the Legendary Alchemists: Ateliers of the New World

Having already conducted one Atelier related interview earlier this year (Atelier Lydie & Suelle: The Alchemists and the Mysterious Paintings,) with plenty more on the way, we were given the chance to interview the producers of Nelke & the Legendary Alchemists: Ateliers of the New World and by god we took it!

So, as Atelier fans await the upcoming release, here is everything we could get out of Junzo Hosoi and Keisuke Kikuchi, including a couple of questions and answers regarding the Nights of Azure games. Enjoy:

*All questions viewed below, were written and sent off during August 2018

In typical interview fashion, would you be so kind as to introduce yourself to our readers, tell us a bit about your history and just what it is your involvement with Nelke & the Legendary Alchemists: Ateliers of the New World?

Nelke & the Legendary Alchemists: Ateliers of the New World in a Nutshell:

Miketendo64: For our readers who have never played a single Warriors Orochi game, how does this series of Warriors games compare to your other offerings and what is the story this time around?

Hosoi & Kikuchi: The Atelier series’ main defining point would be that its games are RPGs focusing on the Alchemy (creating items from raw materials) mechanic.

In order to progress in the story, the player usually operates a game cycle consisting of “gathering materials in the field”,
“creating items in the Atelier through material synthesis” and “using items in battle”.

However, this time around we have put the focus on “town building”. The player will be developing this town by co-operating with successive generations of alchemists, creating buildings, running shop(s) and ordering synthesis tasks.

Miketendo64: Given the fact Gust and Koei Tecmo have revealed quite a few Atelier games for Nintendo Switch this year, is it fair to say Atelier Lydie & Suelle ~The Alchemists and the Mysterious Paintings, performed well on Switch? Is there any chance you could comment on the game’s success on Switch?

Hosoi & Kikuchi: As sales numbers in North America and Europe were similar on PlayStation 4 and Switch versions, it seems this title could reach players new to the Atelier series.

Taking a step in a different direction:

Miketendo64: As a game meant to celebrate 20 years of Atelier, when first coming up with Nelke & the Legendary Alchemists: Ateliers of the New World, was there anything in particular, you wanted to do with the new title that you hadn’t done with any of the previous titles?

Miketendo64: When creating a new Atelier game that walks its own path, what is the process for creating your protagonists? How did you come up with Nelke von Lestamm and her fascination with the ancient legend of the Sage of Granzweit?

Hosoi & Kikuchi: The theme of the Atelier series is true-to-life “growing up” as well as how one’s perception of their surrounding changes along with this growth.

As such, we think of a central idea for each title such as “friendship” or “family” and build our story around it.

In this title, various alchemists will appear and we wanted them to cooperate with the protagonist by having them aim for common goals, hence this concept of searching for ancient legacies.

Miketendo64: It is said that Nelke & the Legendary Alchemists: Ateliers of the New World, will feature alchemists from previous games such as the Salburg, Arland, Dusk and Mysterious trilogies. Any chance you can drop a couple of names for us?

Hosoi & Kikuchi: Many popular characters including first generation Mary, Arland series’ Rorona and Mysterious series’ Sophie will be there. Aside from them, recurring characters such as Hagel and Pamela will also come to town.

Nelke puts the “I” in City:

Miketendo64: With Nelke & the Legendary Alchemists: Ateliers of the New World being a game based around town building and Nelke acting as a Governor, due to her father’s wishes, what kind of things can players expect to do with Nelke and the city they create?

Hosoi & Kikuchi: Nelke is able to order other characters to do certain jobs like creating buildings, selling things at a shop, synthesizing new items, going out to explore as a team etc… Her role is to identify what the characters gathered in town are good at/not good at and attributing them tasks according to their particularities in order to develop her town.

Nelke & the Legendary Alchemists: Ateliers of the New World could get a sequel, but it depends on how successful the first game is:

Miketendo64: While it might be earlier days yet, do you see Nelke & the Legendary Alchemists: Ateliers of the New World, as having what it takes to go on and have a new trilogy of its own, or is it more of a standalone, intended only to celebrate  20 years of Atelier?

Hosoi & Kikuchi: We have developed this title while thinking about making a series out of it if it is successful. Adding in further instalment’s characters from future Atelier series games will allow fresh and exciting possibilities.

More Atelier for everyone:

Miketendo64: Interestingly enough, on top of Nelke & the Legendary Alchemists: Ateliers of the New World, it’s also been revealed that Atelier Rorona DX, Atelier Totori DX, and Atelier Meruru DX, are all coming to the Nintendo Switch and PlayStation 4 in Japan this year. Any chance of these games being localized for western audiences to enjoy?

Hosoi & Kikuchi: We are aware of the fans’ demand for this so we have made it happen! These titles will release on the 4th December 2018 for PlayStation 4, Nintendo Switch and PC via STEAM – digital only.

Miketendo64: Only, Atelier Rorona DX, Atelier Totori DX, Atelier Meruru DX and Nelke & the Legendary Alchemists aren’t the only Atelier games in development as Gust is also currently involved with Atelier Online. A mobile game said to use gacha mechanics. Although it was due to release last year, it was delayed. What prompted the delay and will it still be out in time for 2018, or can we expect it next year instead?

Hosoi & Kikuchi: We are aware of the fans’ demand for this so we have made it happen! These titles will release on the 4th December 2018 for PlayStation 4, Nintendo Switch and PC via STEAM – digital only.

Miketendo64: Is there any chance that the mobile Atelier Online could be localized?

Hosoi & Kikuchi: This title has originally been created with Japan in mind, however, we could discuss this eventuality with our partner NHN Playart if feedback is positive.

Fan demand for Nights of Azure 1 on Switch, could help get Port Underway:

Miketendo64: With Gust going all out with the Atelier and Switch support, I was wondering if we could talk for a moment about another game you put out. How have you found fan reaction to Nights of Azure 2: Bride of the New Moon? Any chance of a Switch port of the first game or plans for a third game?

Hosoi & Kikuchi: Its sales in the NA/EU region were quite similar to Lydie and Suelle’s.  As for “Nights of Azure”, we could consider doing so if the demand from fans is strong.

Miketendo64: Looking back on the 20 years of Atelier, what are your personal highs and lows? Is there anything you wish you had done differently?

Hosoi & Kikuchi: Looking back on it, the release pace of one title every year has been a lot of work and pretty tough at times but we think it was the right decision.

Also, with each series being made of 2~3 titles, we think the kind of wave-like releasing of new series every few years is quite positive.

While there still is a lot of aspects to work on, gathering as much feedback as possible from players and using it as well as possible on the following title has always been our way to improve the Atelier series, and we still want to improve at each development from now on as well.

Miketendo64: Thank you greatly, for taking the time to answer our questions. You have been fantastic. Is there anything you would like to say to the supporters and fans of the Atelier franchise?

Hosoi & Kikuchi: This series has been able to continue for 20 years thanks to support from the fans and we want to sincerely thank them for this. With the Mysterious series coming to its end, we are going to release “Nelke And the Legendary Alchemists” as a series’ 20th Anniversary celebration, and as we are already planning further Atelier games after this one, we hope the fans keep enjoying the series from now on as well.

As always, a huge thanks goes to Nathan Mills at Koei Tecmo for his assistance with arranging this interview and translating it. We’d also like to thank both Junzo Hosoi and Keisuke Kikuchi for taking the time to answer.