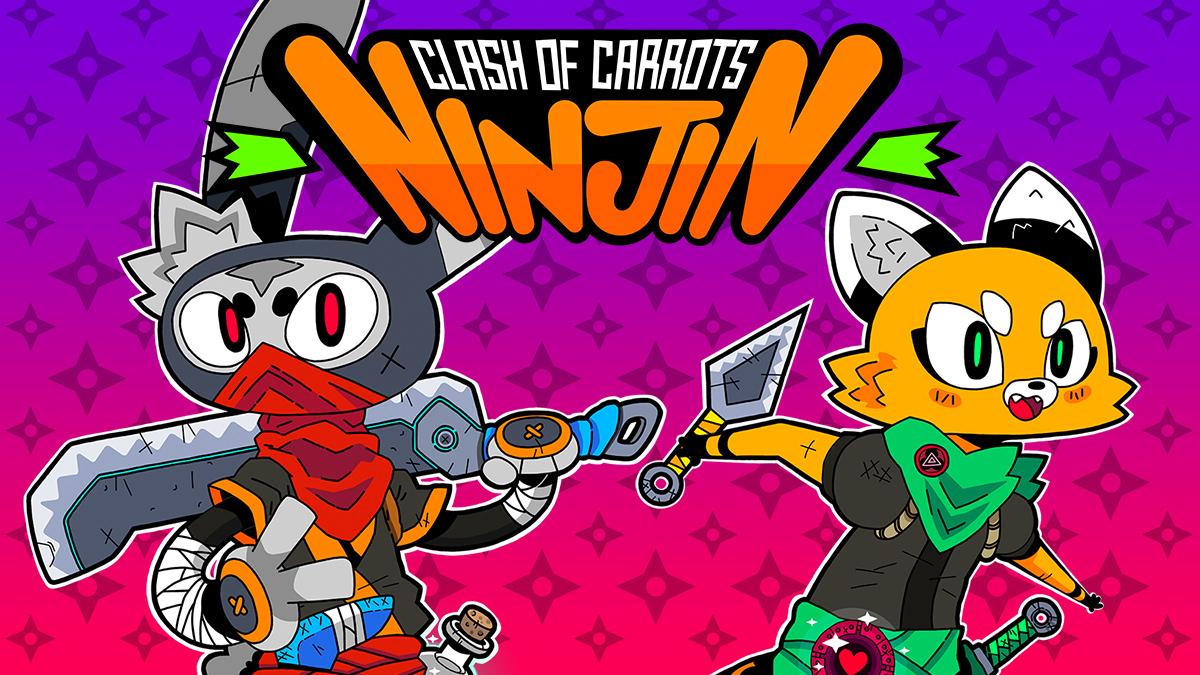 With playing so many new indie titles on the Nintendo Switch week in and week out, every once in a while a game comes along that really catches you by surprise. Ninjin: Clash of Carrots, from developer Pocket Trap and publisher Modus Games, did just that and features a totally unique way to play an action beat ‘em up. The concept sounds very strange and peculiar, but once you look pass the premise, you have one of the more fun all-around titles for the Switch.

Right from the get-go I realized just how addictive and fun this fast-paced beat ‘em up action game was going to be. You will be slicing your way through all sorts of enemies with a colorful pixel art style and level design. The story centers around a ninja rabbit named Ninjin and his goal is to recover the villagers’ stolen carrots from the evil Mole Shogun and his minions. The cut-scenes are in the same format as where the gameplay takes place and the dialogue scenes have some clever exposition that comes across as humorous.

There is a world map where you will be completing multiple stages and each area has a boss that must be taken down. Just like in the Super Mario Brothers franchise, you complete all of the stages and eventually face a boss to move on to the next world. You will also be able to compete in a live TV show on the world map, which is basically a survival mode that will challenge you with waves of enemies as you try to stay alive. This is how you unlock new weapons and the better you perform the better the rewards.

The gameplay has you dashing back and forth in a 2D environment as you take down a variety of different enemies attacking you from all angles. Doing all of this while dodging projectiles with a sword in your hand to slash your way through enemies, as well as using throwing knives for ranged attacking by holding the right stick and letting go. Money will drop from defeated enemies in the form of carrots which can be used at the end of the stages for upgrading Ninjin.

Each stage has different segments and within these segments, different waves of enemies come at you. As you make your way through each segment there is a steady progression of difficulty ramping up and new enemies are introduced at a steady clip. Every enemy is unique and they all will attack you at different angles, and with different weapons, speeds, tactics, attacks, and even throw firebombs at you.

Fortunately, your character won’t just be slicing with a sword as there are certain moves that can be pulled off, such as a dashing attack that rips through enemy lines. Early on this move is a life saver as Ninjin is unable to slash his sword behind him while running, but if you dash backwards while attacking you can perform damage from behind.

Ninjin: Clash of Carrots features a huge variety of customizable options that really will aid you as you do battle through its stages. There’s a store where you’ll be able to buy new weapons, items, potions, throwing weapons, and special talismans. You can also customize your character with different gear in the loadout menu. The customizable options are fun to peruse and all of it will help you in battle. There are two shops that you can buy from between the normal shop and the more shady type of shop that will sell different get that seems more of the black market type.

Online and offline multiplayer modes are available for up to two players and it’s very easy for a friend to jump in and get to hacking and slashing within a few seconds. Like any great beat ‘em up, co-op is the real highlight of Ninjin: Clash of Carrots and playing along with a buddy is the best way to experience the title. If you’re having a considerably hard time on one stage, co-op mitigated most of the difficulty right away and took away some of the frustration the genre can bestow upon players.

Overall, Ninjin: Clash of Carrots takes a formulaic genre and manages to make it fresh, while also having its own identity. The humor is on point and the gameplay with deep customization holds up well. While Ninjin can become repetitive and it’s over pretty quickly, it’s a great experience and can be fleshed out if you plan on getting an S-rank on each stage. Don’t overlook this surprisingly fun little indie gem.