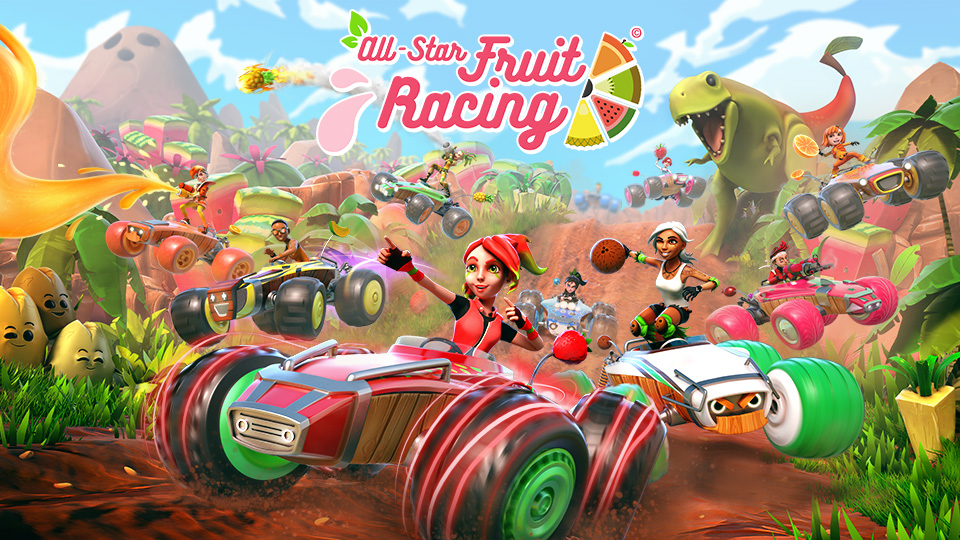 …I swear this isn’t a parody game.

Yes, as hard as it may be to believe, some dev team out there actually decided to make a kart racer based around fruit. From the loading screen factoids (did you know the yubari king melon is the most expensive fruit?) to the characters all themed after apples, bananas, and other such nutritious treats, All-Star Fruit Racing goes all-in with the fruit theme, though mercifully stops just short of wanton punnery. It’s an impressive commitment to a gimmick, although I wish they’d put just as much effort into the character visuals – nearly every racer in the game has a truly butt-ugly model.

What really makes it a shame is that each character has a wonderfully drawn 2D portrait that showcases what they were supposed to look like, and I can only imagine the concept artist on the game was just as disappointed to see the fantastic designs utterly butchered in their translation to 3D. The music is similarly hit and miss – for every excellent theme that has you bopping your head to the beat, there’s an utterly unfitting and forgettable tune, or worse – one that sounds great but is so short that it noticeably loops mid-race (looking at you, catchy Watapeach jingle). Sound effects don’t fare much better, with corny voice samples and muted weapon noises.

But let’s look past ultimately inconsequential features like characters and music – a kart racer could have the greatest roster and soundtrack of all time and still be utter garbage if it doesn’t play right, so I’m pleased to report that the game actually handles extremely well. Fans of Sumo Digital’s Sonic & All-Stars Racing Transformed will feel right at home with All-Star Fruit Racing’s similarly wide tracks and driving mechanics that encourage holding a drift down straightaways to unleash a massive boost after a curve. Why fix what’s not broken? Instead of reinventing the steering wheel, the big twist here is the Juicer system, a new way of implementing the typical kart racer weapons. Picking up fruits of different colors will fill four different meters, each of which correspond to a different item type: cherries offer an extremely minor speed boost that also leaves a trail to slow opponents behind you, grapes provide a basic tornado projectile, kiwis give you shields to block incoming threats, and watermelons equip you with weapons to attack opponents from the rear.

Combining these meters results in buffed versions of each weapon, and using all four simultaneously gives you a character-specific super move that can decimate opponents. In theory, this is a neat idea that should promote skillful play, but in practice, it seems that certain weapons are simply straight up better than others. Why bother to predict your opponents’ attacks with shields or drop hazards to keep them at bay when speed boosts can get you back in the game instantly after spinning out and slow down enemies on your tail simultaneously? Of course, there’s also a separate Mario Kart style item system to play with that scatters random item boxes around the course for the purists out there, so it’s not really that much of a problem. On a side note, when being targeted by an item, a snippet of Ironside (aka the Kill Bill siren noise) plays and it’s a little jarring to hear every time.

A good kart racer lives and dies by its track design, and All-Star Fruit Racing doesn’t disappoint. Courses are brimming with visual splendor and showcase a unique level of verticality to their layouts that even Mario Kart 8 fails to offer. The Avocado Roller track is an obvious homage to F-Zero X’s Big Blue, taking place entirely on a long snake that you can drive on any side of, as well as gain or lose speed depending on which part of the snake you’re driving on. Meanwhile, the Jurassic Park themed Dino Juice track (complete with massive entrance gate and a conspicuous fruit at the starting line who spared no expense on his cosplay outfit) is great fun with plenty of twists and turns, a surprise appearance by a T-rex on the last lap, and an epic yet quirky tune that oddly sounds more Danny Elfman than John Williams. And because this is a kart racer, the final track of course takes place on the obligatory rainbow-colored road in space.

Unfortunately, a few of the tracks are dragged down by how short they are. The aforementioned Avacado Roller takes roughly 45 seconds to finish as the race lasts a single lap, while others like the relatively lengthy Icy Grapes track get five laps and can take well over five minutes to complete. In some cases, these are merely arbitrary rules imposed specifically for the career mode, but some courses are simply designed as one-way in the vein of Mario Kart tracks like Mount Wario and Maka Wuhu and cannot have their lap limit increased even in free play. Why they did this is absolutely mind-boggling, as it ensures that you’ll rarely want to come back to the handful of tracks that take as long to load as they do to play.

The AI can also be an issue, as CPU-controlled racers range from braindead to brutal and never really find a middle ground in between. It’s not hard to pull away from the pack at the start, and drivers who liberally use drift boosts and make their turns perfectly can often find themselves far ahead of the other racers, but make a single mistake and you can be sure that a vicious AI opponent will overtake you even on the easiest difficulty setting, refusing to be passed unless you utterly dominate them with items and skill. Luckily you can restart any course with no penalty if you get robbed of victory at the last second, but if a grizzled kart racing veteran like me had trouble nabbing the gold in some of these races, the young children this game is presumably aimed towards are in for a wild ride.

With time trials and a career mode featuring 11 cups across 21 tracks, as well as a mostly female roster of 22 characters (12 of whom are unlockable) and plenty of customization parts to deck out your vehicles with, there’s a fair bit of content to enjoy here even for the solo gamer with no one to enjoy the local multiplayer with. Fear not, however – although it was previously announced that the Switch version of All-Star Fruit Racing would not feature online play, the developers have since relented and confirmed that online play will be coming in a launch-week patch. As the online is not yet available I obviously cannot speak to the quality of it (though I will edit this review accordingly with impressions when it’s live), but local multiplayer plays as well as single-player does, without sacrificing much in the way of course detail.

That’s not to say single-player performs particularly well, however. The game aims for 30 FPS but rarely seems to hit that mark, often hovering just below it and dipping further when the environments get too ambitious. While it’s nowhere near unplayable and there was never a moment where I had trouble winning because of a problematic framerate, it is noticeable and gamers who find uneven performance to be a major issue will likely want to stick to the 60 FPS Mario Kart 8 for their Switch kart racing action.

All-Star Fruit Racing is a game that’s enjoyable in spite of itself. The one-way nature of certain courses means the fun can sometimes be too short-lived, the sadistic AI and performance issues can be tough to get past, and there are various other strangle niggles here and there such as when you’re forced to play the same track twice in one cup or how elimination races shove a giant distracting text box in the middle of the screen when an opponent is eliminated. Still, the core gameplay is great and the majority of tracks are a blast – assuming the online play is serviceable, it should be a good time regardless for those willing to plunk down the $40 asking price.