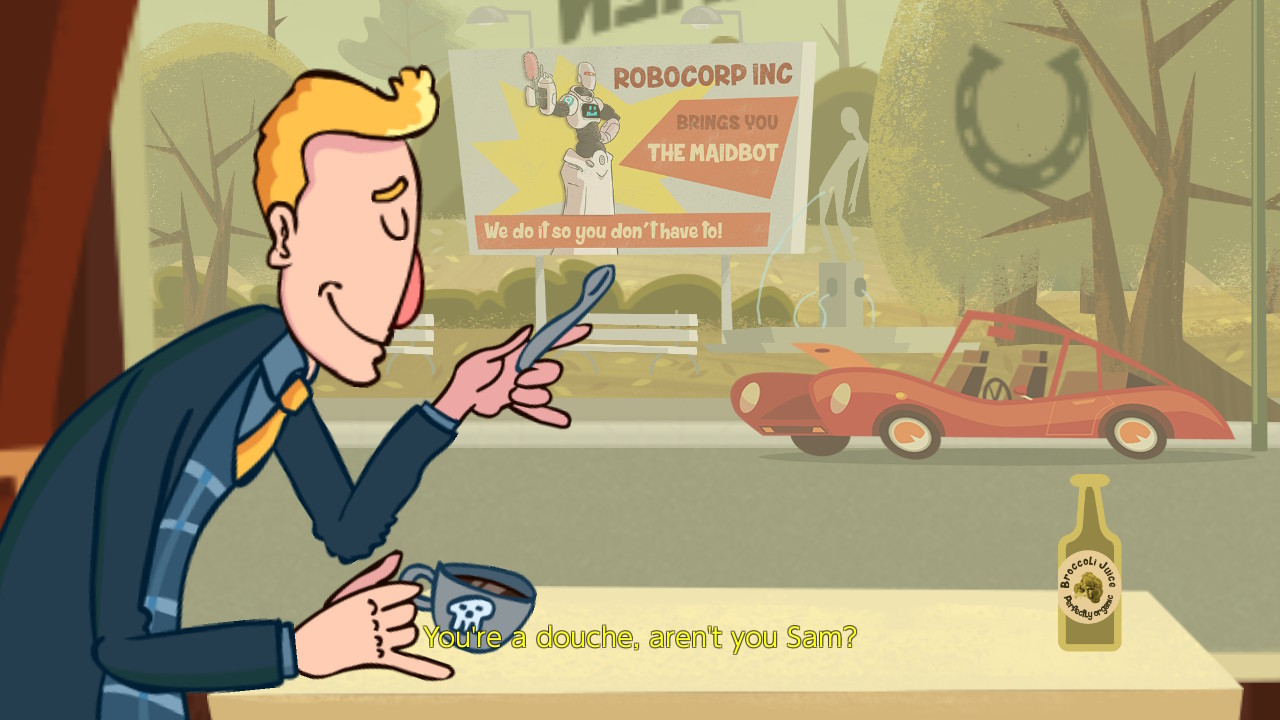 Breathe, Blink, and Stumble Your Way to the End!

If you’re looking for something new and interactive to play, Perfectly Paranormal has the answer.  Previously released on Steam, Xbox One and PlayStation 4 on 2016, Manual Samuel is a unique twist on the adventure, action, simulation genre which puts you in the almost dead, “Weekend at Bernie’s”-esque body of Samuel after he gets hit by a septic truck and the adventure only gets weirder as the story goes on. Along the journey, you will be tasked with showering and getting dressed for work, driving Death and his girlfriend-to-be War around a gang-ridden neighborhood, and thwart an evil robot uprising.

The game’s story features a down-on-his-luck, Samuel, son of a CEO of Robocorp making a deal with Death to work his way back to life. After being given a second chance of living again, Samuel must manually control his bodily functions without dying for 24-hours. Manuel Samuels’ gameplay hook incorporates the involuntary actions of breathing, blinking, limb movement, spinal realignment, and more to various button controls throughout the game to help you control Sam.

In an early section of the game, you have to maneuver Sam around his bathroom to take a whiz, shower, and get dressed. These tasks are normally not difficult in most games, but Manual Samuel challenges the users by incorporating the simple tasks of breathing and blinking, so Sam doesn’t pass out or get bleary-eyed.

If you allow to let Sam pass out, the screen itself begins to brighten and makes seeing Sam almost impossible as if the world around him was fading from existence. This unique graphical change helps to ensure that you won’t forget a body function too quickly and lose Sam to Death forever.

Manuel Samuel is broken up into segments that are bookended with short cut-scenes that utilize the games unique graphics engine and hand-drawn characters. The voice actors are mostly ok to well done as they deliver an impressive amount of dialogue during the short duration of the game.

For the most part, you need to move left to right in each level, controlling Sam’s legs and feet. This back and forth clicking of the left and right triggers is only slightly annoying as the pace with which you press will make Samuel move slower or faster. If you move Sam too fast though, you may find yourself stumbling down steps or keeling over as your backbone gets out of whack.

Samuel’s movement control reminded me of the spongy wobble of Octodad, which was previously released on Switch, as well as other systems. One thing that was satisfying was how quickly the game introduced various mechanics, almost like Wario Ware titles have multiple styles of gameplay in short burst. I never really found myself annoyed with Sam’s basic controls though sometimes the game or Sam’s near-death body seemed to have a mind of its own.

There are some segments of driving and combat in the game. The driving segment has you navigating the streets to work as Death teaches you how to drive a manual transmission car. In this chapter, the viewpoint of the game switched to a head-on view with you peering through a cut-out view of the car. There Sam is tasked with pressing the gas, brake, and clutch, while also steering or operating the shifter.

Along the road, Sam and Death come across old ladies crossing the street and Sam must avoid them. Apparently sending people to Heaven or Hell when it’s not their time is not what Death or Satan wants.

The combat in the game is also found in small and minimally controlled bursts. One encounter has you shooting robots that have become sentient and wreaking havoc in the town while you embody one of the ‘manual’ robots armed with a gun, shield, and rocket launcher. There is some light sword combat too, after a visit to Hell’s prison, Sam and Death breakout, and Sam embodies a demon from the underworld.

The two hour or so journey is over quickly, but along the way and within each level you will find unique music and sounds that capture the ludicrous journey of Death and Sam. While the music bits are tied to the level you’re on, they do stand out as memorable audio tracks that fit well within the games story mode.

Manual Samuel’s audio is also very fitting as you navigate same around his house there are specific sounds like running a shower, taking a leak, and spilling hot coffee on your face that stand out to me as well done. Not quite sure how you capture a good ‘pissing sound’ but I sure hope they washed the boom mic afterward. The superb voice cast of Manual Samuel gives enough to say from each of the main NPCs. Death especially has some of the funniest lines in the game. The narrator will often let you know with a bit of snark that you need to remember to breathe and step with the right foot.

Each character you meet, whether it’s Satan, War, or Sam’s dad and his boardroom cronies, all have something to say. The voice actresses and actors matched up really well with their hand-drawn depictions. Even the lip…or jawbone syncing of Death is really well done and fit with the overall design of the game.

I never noticed any slowdown in the game, even in handheld mode. The game loads fast and moves at a steady clip throughout. Manual Samuel isn’t pushing any graphic boundaries as far as polygons, but it does manage to play smooth and crisp in both handheld and docked mode.

The game does offer a couch co-op mode which puts you and a friend together to manage the story campaign while managing certain aspects of Sam’s body. While hilarity can come from playing the game that way, I don’t imagine too many people choosing this as their co-op game of choice to play when a friend comes to visit.

While playing Manual Samuel I only stumbled a few times with some of the puzzles or order of completion of certain sections. The game is very linear and aside from some speedrunner-like achievements, there isn’t much to do once you beat Manual Samuel. That may be a bit of a bummer for some as the game is $10 USD and short. I was able to zoom through the single-player campaign quickly and without dying. I never had to retread or retry a section either.

Manual Samuel is a wholly-unique experience that will make you laugh…but only for a short time. The game is maybe two-hours long, and that’s even if you listen to all the cut-scenes. This is a short, limited replay value type game that is hard to fully recommend. On merit alone, it achieves a lot that many small studios can’t in their first game. It’s charming, it’s funny, it’s different, but I don’t know if it’s quite the game you throw money at and not feel slightly upset with the end package in front of you. The $10 price tag is less than most people pay for a 2-hour long movie, so in that regard, it may be worth it for some people to play it and run through it.