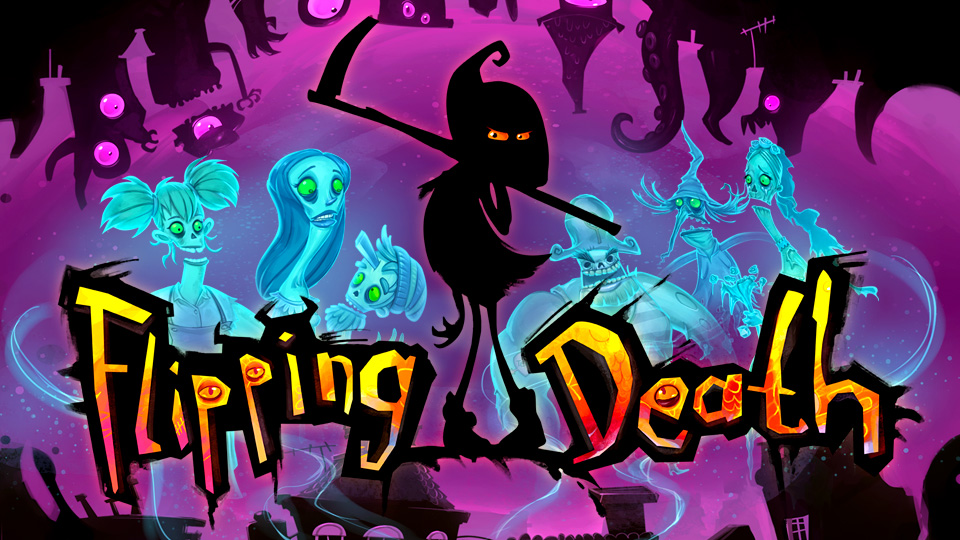 Seasons don’t fear the Reaper, nor do the wind, the sun or the ghostly residents of the Otherside.

On that fateful day back in October 2016, when the Nintendo Switch was first revealed to the public, thanks to an impressionable trailer, there were 2 European developers who were quick to reveal they were developing games for the new platform. One, of course, was Image & Form, who at the time was working on SteamWorld Dig 2 and the other was Zoink Games.

It would not be until late February 2017 that we’d actually get to learn the name of the game and see how it was played, but when we did get footage of it, the trailer did offer plenty to get excited about. Flipping Death wasn’t just any other game from Zoink Games but it would act as a spiritual successor to Zoink’s fantastic Stick it to the Man! and it would allow players to play as a Reaper of souls.

Now, Flipping Death may not have released in 2017 like the developers had hoped it would, but when it comes to the new Zoink offering, having to wait for it until August 2018, truly is what was best for the game, as all that extra time in development, has benefitted it immensely. Flipping Death is not just another 2.5D platformer, but it’s a 2.5D platformer that if there was a video game of A Nightmare Before Christmas, only Jack and Sally was replaced with Penny Doewood and humorous ghosts, then that game would be Flipping Death.

Still, it should come as no surprise that Zoink Games can make such a beautiful game, since they did develop the phenomenal Fe, which launched earlier this year. Not to mention the fact that the Eisner award-winning Ryan North, was on hand to write the story. If those two things together aren’t a recipe for success, coupled with hilarious dialogue and whimsical animations, then what is?

On the subject of story, Flipping Death is Penny Doewood’s story that truly begins after her life comes to an end, but don’t worry, there is a prologue for players to playthrough and it will reveal how she dies in the first place. One passed over, Penny finds herself in the Otherside, home to restless spirits and more, which is where she meets Death.

Desperate for a vacation and believing Penny is the temp he applied for, to take over his role while he goes off to the Moon as it’s the only location where “no one has died” and he can be left entirely alone, he equips her with his scythe and dresses her up for the job, before departing rather swiftly.

For Penny, who has always been morbid, the new gig is a dream come true, only there issues at play. Not only is she in denial about being dead, but being Death isn’t entirely straight-forward. There might not be any typical reaping of the souls across the game’s 7 chapters (not including the prologue,) but there are a lot of restless spirits who can’t pass on until wrongs have been righted, puzzles are solved and one terrible incident that was waited centuries, before its consequences can take fold and run wild.

Thankfully, although Penny’s hands are pretty full, they can be emptied pretty quickly too, by throwing the scythe with ZR after aiming it with the right analog stick, and pressing ZL to have it return to you, or ZR to warp to it. “Scythe Skipping” as I like to call it, is a great way of reaching higher up platformers and collecting Ghost Critters.

In the Otherside, Ghost Critters act as a kind of current, of which there are three types of. The most common one can be found all over the Outside and will fly around, whereas the second kind requires you collecting a bunch of them within a set amount of time. As for the last one, they can be obtained after defeating a ghostly jellyfish-like monster.

With regards to the purpose of the three kinds of critters, they allow Penny to do the best thing a Reaper can do, possess the living. Provided Penny has the required amount Critters for her intended flesh puppet, X will allow her to possess them and stroll around the world of the living, aka Flatwood Peaks and interact with the locals. Oh, and by interacting with the locals, this can vary since different characters do different things, such as a police officer who can hack whenever he’s asleep and goes sleep-hacking and even little Tina who lives to bite, a lot.

By possessing the living and using L whenever inside someone, Penny can read the minds of her vessels and get learn a bit about each resident who calls Flatwood Peaks home. Across all 7 chapters, this possessing gimmick is one players will be tasked with doing a lot, but how much of it she does, is down to you.

While there is a fundamental amount of it she must do to complete challenges, solve puzzles that play out across both Flatwood Peaks and the Otherside, there are extra challenges for her to complete as well. The number of bonus challenges can vary in quantity on each chapter, but if you wish to fully complete the game, you will need to solve the puzzle to each one as each one you complete will earn you a Ghost Card.

Ghost Cards, which are basically character cards, but with a better name, are the game’s only real main collectible. Only, because the puzzles are not always the easiest to solve, you can always focus on beating the game first and then replaying chapters to get all the cards you missed. Just know in order to do this, you will need to play the entire chapter and you will have to ensure the narration that every chapter opens up with.

Whether you play the game and then get all the cards by replaying levels, or just get everything in a single playthrough, Flipping Death is a game you can best easily between 7-1o hours, but it doesn’t mean it’s not enjoyable, as the soundtrack is absolutely gorgeous, although some puzzles can be insanely maddening.

Even though there are hints that will point you in the right direction, there will still be instances where you are left standing in the open-ended, stuck for ideas as to how to proceed. There was one instance where I was stuck on Chapter 2 and for the life of me, bowling balls would not shoot off a Tennis player’s arm.

I tried restarting the chapter twice, but nothing happened, so I deleted the game and installed it again, only to boot up my save and the bowling balls were firing. In that moment I was both very annoyed, but relieved that I could finally move on and put the chapter behind me. Oh and since I didn’t mention , because Penny must traverse between two dimensions and there is quite a bit to cover, any character she has possessed and ghost she has talked too, will become available as a warp point that Penny can take advantage off, when players press A to bring up the map and select a destination.

Other than tedious issue, it was mostly smooth sailing with Flipping Death and I can guarantee you, if you think this game couldn’t do better than having two worlds and ghosts, there is more than just humans and the dead present in this fantastically tasteful title and you will be able to possess a bunch of them. So, if you ever dreamed of being (SPOILERS) a chainsaw-wielding mermaid and a lot more, than Flipping Death is the game for you as it takes what Stick it to the Man! did, only Flipping Death does it a whole lot better.

While a number of games can be a spiritual successor to a previous title or series fans love, not all of them can live up to the games that come before them, and fortunately for Flipping Death, it is a game that can go toe-to-toe with Stick it to the Man! and walk away as the victor. It might be short, but it will have you laugh, cry, possibly rage a little and pull your hair out and you’ll be hard-pressed not to love it! Zonk have worked very hard on Flipping Death and it shows because death and dying has never been as fun and as beautiful, as it is displayed in Flipping Death.