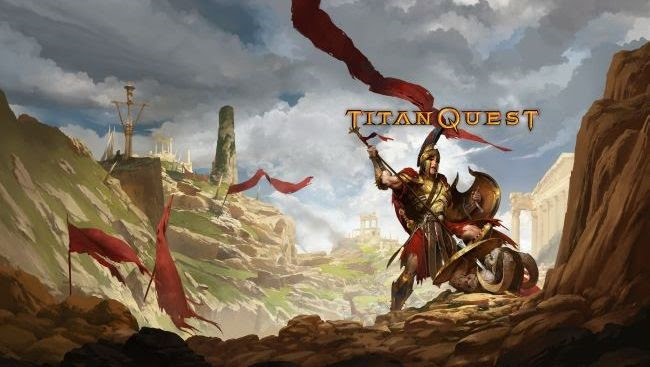 Slay your way through hordes of monsters and go toe-to-toe with the mightiest titans of Greek Mythology. Why stop there though? Your journey is just beginning as you try to make a name for yourself as the greatest hero in history in Titan Quest.
Created by Age of Empires co-creator Brian Sullivan and Braveheart writer Randall Wallace and developed by IronLore, Titan Quest is a role-playing action game set in Ancient Greece, Egypt and Asia. Originally released on PC back in 2006, it then came to Steam in 2007. Titan Quest has since been released on Mobile devices as well as consoles and has had two expansions to date; Titan Quest: Immortal Throne in 2007 and Titan Quest: Ragnarök in 2017.
For a PC game from 2006, Titan Quest could have done with a much bigger visual overhaul that it got. That’s not to say that it is ugly to look at but in this day and age, it has not aged very well. There have been graphical improvements but with limitations. Cell shading has been touched up but you would only notice if you ran a comparison against the original PC version.
The music takes a rather subtle approach, usually reserved for when inside villages and cities or in intense battles. When casually roaming the wilderness you will be presented with more natural ambiance. The voice acting helps give the NPC’s a bit more character and is a bit of a godsend as the text boxes that appear every time you talk to an NPC has text so small that is can actually be quite straining whilst looking at the small screen on the Switch.

The story of Titan Quest will be quite familiar to anyone who had a history lesson on Ancient Greece. Before the Great Gods of Ancient Greece took their place atop of Mount Olympus, they had imprisoned the mighty Titans that Reigned over the world and brought it into a golden age for Mortals. The story takes its own turn when a group of lesser Titans, belonging to a group known as the Order of Prometheus aspire to break the connection between the Gods and mortals and break the Titans out of their imprisonment.
Your take on the role of a customizable avatar of your own creation, who after stopping the horde of monsters attacking the lands of Helos, learns that the Lesser Titans, also known as Telkines are the reason behind the attacks and sets out to slay the monsters, putting an end to their plans. Your hero will have to fight their way through Centaurs, Hydras, Medusas and all the other mythical beings that have the misfortune of getting in your way.

Titan Quest is played in a third-person perspective with a top-down isometric view. The world around the borders of the screen are surrounded by the ‘Fog of War’ filter so you can’t see what lies around you except your current surroundings and where you have been already. You also have a mini-map in the lower left corner of the screen that gradually fills out as you traverse so you can what could be moving around in the immediate vicinity.
When you start playing, you begin with little more than a knife and your wits but as you defeat enemies and find crates and chests, you will obtain better weapons and armour. Unfortunately, you can’t keep hold of it all so you will have to sacrifice some weaker items to make way for better ones. There are also a number of skill trees of mastery that will make you get stronger, resistant to certain attacks and other perks. You can also choose which attribute you would like to improve that will allow you to use a particular weapon.

There is so much customization options that also include what kind of garments your hero wears. Though you can just about make out the different garbs when zoomed out, many clothing and accessories can possess special perks like health or energy recovery, resistance to magic attacks or increases to your physical defence. Do remember to assign your attribute points whenever possible as you can’t use particular weapons or garments until you do.
Gameplay is pretty much a hack and slash endeavour but it is worth pointing out that going into enemy heavy camps is suicide unless you have enough health potions and a decent weapon. You can equip two weapons in the selection menu and switch between the two with the touch of a single button. A recommended option is to use a Melee and ranged weapon combo that will help whittle away enemy health and then switch to the melee weapon when face to face with the enemy.

Every enemy that you encounter will need to be dispatched at some point. With most RPG’s, Titan Quest is a grind fest and if you hope to be able to defeat the stronger enemies at a later point in the game, you will need to grind away on the weaker enemies first. Taking out enemy camps and wiping out monsters are not the only way to gain experience. Some NPC’s will offer you side quests in return for something of value and exp as well. The side quests are usually just killing a load of monsters until you find a key item and then bring it back to the NPC. Make the most out of each trip as you will very rarely return to any village or dwelling after fulfilling any sidequests there.
Controls have been made easier play on consoles but it can take much longer to reach the particular sub-menus you want to access as the PC version had different menus allocated to different keys. Gameplay doesn’t stop when you go into menus either so always make sure there are no monsters or beasts in the area. Failing to do so will have you killed before you even reach the menu you were looking for.
When the inevitable does happing, you will be resurrected at the last rebirth fountain you activated. This can be a bit of a drag if you were quite a distance away before you died as you will have to traipse all the way back to where you were. Making sure you have plenty of potions do come in handy and by simply pressing ‘L’ on the controller, you can get stuck in and keep up the good fight.
Titan Quest has made a relatively good transition over to consoles but it is not without its flaws. As I said before, text is relatively small and can be straining on even the most sharpest of eyesight’s. The characters also speak but their voices fade off as you walk away from them. This makes sense logically but with no real way to fast read text or speed up the speaking NPC, you will spend as much time standing around listening to NPC’s and their woes as you will be slaying monsters and fulfilling the actual sidequest.
If you get tired of playing alone, you can opt for split-screen multiplayer with another person or even play online with up to six players. If you had yet to create a second character, and play with said character, Player two will find themselves all the way back at the village where you began the story. Even though you can both play independently of each other with some minor performance issues, you will probably find it more enjoyable, if the first player teleports back to the beginning so you can fight alongside each other with some good old fashioned cooperation.
For a 12 year old game that has been ported to consoles current gen consoles, there have been a few bugs that have slipped in. The PS4, Xbox and Switch versions of Titan Quest all seem to share the same bugs like inventory suddenly disappearing and reappearing, the environment textures not loading up fast enough and leaving some grey areas. I hadn’t experienced anything as severe as the game actually crashing, but there have been a number of cases where the software has completely crashed.

I am not a huge RPG fan and too many options and menus just leave me feeling confused. Titan Quest is an admirable game that offers many hours of gameplay and character building (AKA Grinding) that die-hard fans of the genre will definitely get a lot of play time out of it. For me though it, fails to really grab my attention and its charm is wasted on me. It takes time to really get into Titan Quest and you really have to be in it to win it. With so many great RPGs out now on the Nintendo Switch, I feel that Titan Quest may struggle to cope alongside them.