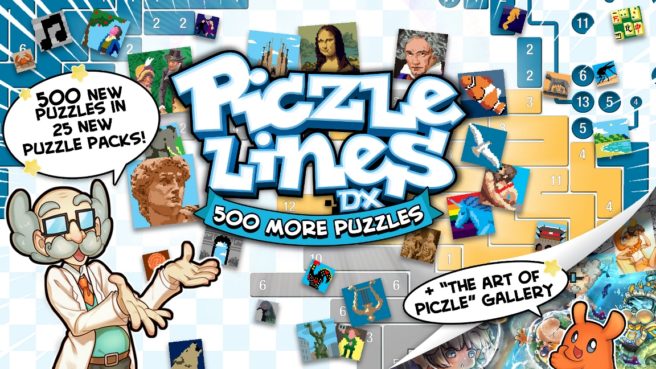 If you are a fan of puzzle games and most notably the Piczle Game Series, you may be interested to know that there are two more games coming to Nintendo Switch. Rainy Frog and Score Studios have officially announced that the have two new games coming to the console. Piczle Lines DX 500 More Puzzles will be launching next week on the system and is a stand alone title that does not require purchase of Piczle Lines DX. The other title lined up for Switch is Piczle Colors and will be released sometime later in the year.

You can find out more about both games below:

Some of the 500 puzzles included:

A special behind-the-scenes look at some of the Piczle art created by Score Studios. 36 pages of character designs, sketches, icons, doodles and promotional artwork to admire, some of which has never been seen before.

Highly anticipated follow-up! Piczle Colors will exercise your brain in exciting new ways with a unique logic-puzzle style, a fun story, a bucket load of extras and the return of your favorite characters!

Inventive genius professor Matrix has created a paint, Piczle Paint 3000, that can leech the color out of anything it covers. His inventions, including this one, are not safe in the hands of Score-chan. Can you help her and Gig undo the great chaos created by her inevitable mishandling of Piczle Paint 3000? Also there is bug the cat who is naturally more concerned with cat matters.

Row and above each column tell you how many blocks of each color go in each row or column. By following these hints you can paint each part of the grid and reveal an image. However, these hints do NOT tell you the order they come in!