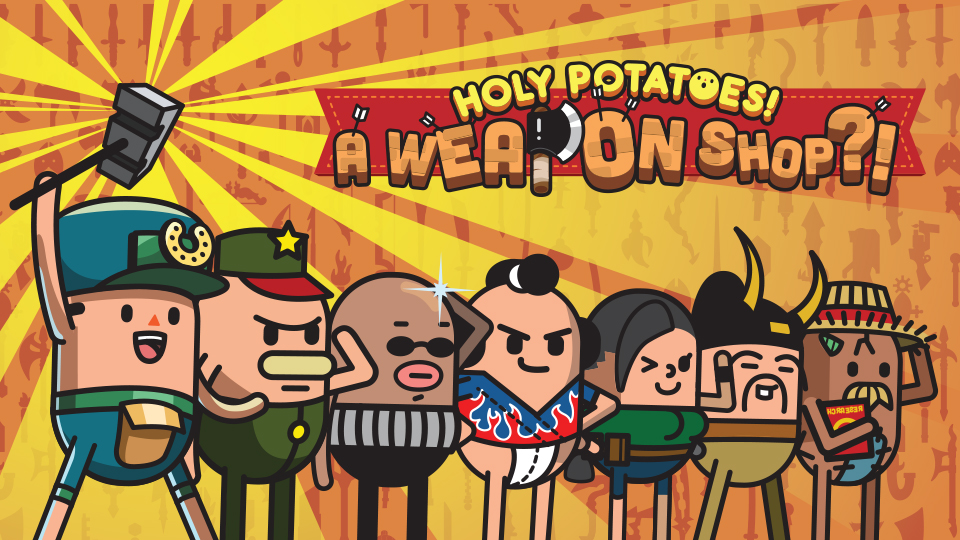 Management simulators are some of my favourite games to play, their gameplay is relaxing, yet involved enough to keep your attention. Most management sims, are usually made with the PC audience in mind, as these games involve lots of menus and selections that just can’t be done efficiently with a controller, and as charming, unique and quirky the games may be, if the controls aren’t smooth and efficient, then the game suffers massively. Unfortunately, this is the case for Holy Potatoes! A Weapon Shop?!.

The game has such a fun and humorous vibe with tons of charm that will bring laughs throughout your playthrough, but unfortunately, this charm and quirkiness is overshadowed by the mess of clunky, unresponsive controls, which once again, shows a lack of hope for management games on the Nintendo Switch. Holy Potatoes!’s premise is pretty simple, you’re an inexperienced Potato that has inherited less than a single percentage of your Grandfather’s weapon shop, and it’s up to you to run day-to-day operations to take it back off the ground. It’s your job to craft the name of your weapon shop for being the most famous of all time.

While the story isn’t all that ‘exciting’, the smart dialogue and witty references make-up for more than enough, as each cut-scene, line of dialogue and sentence in this game is littered with pop-culture inspired humour and light-hearted chatter. A lot of the times, I felt inclined to keep playing, not to see what happens next in the narrative, but more to see what funny movie or game would be referenced next.

Gameplay, to those who have played a management simulator similar to Holy Potatoes! before, is quite simple, go through menus, analyse and optimise weapon stats and then sell them to the right buyers – however, for those who haven’t played a game of this genre before, especially on Switch, will have a hard time comprehending the controls and utility of the menus in the game.

There is a tutorial, but rather than be something extremely fleshed out and gradual, the game dumps a load of information on you at once and lets you be. This can be quite intimidating to newcomers of the series and genre, as the first hour of the game felt more like studying for a test than figuring out how to play a game, and to make it worse, these menus aren’t as smooth or as easy to navigate on the joy-cons as they would on mobile or PC, so the whole process of researching, forging and selling weapons becomes more of a slow and tedious task, then fun and fast.

Creating weapons is your objective in this game, as implied by the title. It’s you and your potato smith’s jobs to dish out hundreds of weapons. With more than 70 different customers to forge weapons for and near to 200 different weapons to research, forge and sell, there are many different ways to grow your business and gain fame and cash (also known hilariously as $tarch).

There are over 20 different areas and towns to visit, explore and expand your business to, as well as 30 various different potato smiths that can be hired. As well as that, there are 20 legendary heroes to discover, which are all major references to different pop-culture themes and even a dog that also just so happens to be a potato.

Creating weapons is a fun and interesting experience, and each one can be customised to however, you would like by altering and improving attack, speed, accuracy and magic. Each smith has their own speciality, so it’s ideal to move the smiths with the most experience to the correct workstation when forging a new weapon, depending on what your client would enjoy the most.

Like most management simulators, every action needs to be monitored, as going off and doing anything you want can come at a serious price. You’ll need to pay your smiths wages, as well as give a fraction of your profit to the other 99% inheritance owner. Materials, vacations and training will cost you money too, so keeping an eye on it is important, as if it drops to below zero, you’ll expect a visit from the Weapon Shop Guild, who will give you a loan a couple times, before eventually closing your store. It’s this monetary management, as well as the balance of business reputation, which will have you trying your absolute best to make the most badass weapons possible during your playthrough.

Even though the story and main premise of Holy Potatoes! Is somewhat simple, the game stores a lot of depth, which brings a lot more replayability in the long run. This depth is slowly built into the main mechanics of the game, creation of weapons, selling the weapons, buying materials and researching new weapons. How your business grows is all tied to these mechanics, as if they are executed properly, you will see yourself continuously growing famous and amassing a large fortune.

The game has a sense of personality and uniqueness to it every playthrough, as every hero and smith has their own level which can be grown to benefit you. As you play through the game, each smith will have their own role, whether that be merchant or explorer, every smith in your shop will feel personalised to your game and shop.

Selling weapons is the key for Holy Potatoes!, every time you send out a smith to sell a weapon you have made, there will be a range of heroes for you to choose to sell to – you may be inclined to sell to the highest bidder, but a lot of the time, the right thing to do is to assign the right weapon to the correct hero so they can gain XP faster and reach their maximum level faster, which will in turn, give your shop more fame.

However, if you’re in need of a quick buck, sometimes selling weapons of a certain type to a hero that doesn’t meet the requirements can give you a lot more cash, for example, giving a mage a Bow. Every client and customer has their own specific likes/dislikes that you’ll need to tend to, with each weapon holding their own primary and secondary stats. You’ll also need to boost a weapon’s stats to assure that your weapon is of the highest grade in a certain stat field.

One thing that really kept with me during my playthrough of the game was Holy Potatoes!’s fun cartoonish graphics and bouncy, relaxing music. Both of these aspects are really unique in their own right, and it felt like a treat looking at the funny, potato-fied depictions of my favourite pop-culture characters. There were many times I felt lost in the whimsical music and I really felt like this game’s atmosphere felt homely on the Switch.

What really brings down the fun and quirky gameplay of Holy Potatoes! A Weapon Shop?!, though, is the quality of the Switch port, a lot of the aspects have hardly changed from the PC, with the menu being a clunky mess to navigate with the joy-cons when they are obviously designed to be used with the mouse and keyboard. Every action that should take a couple of clicks is dragged out for way too long, as these menus and the game overall, was not ported very well.

Even the touchscreen, which you would think would be as quick and easy as Mobile or PC controls felt unresponsive and slow, which forced me to stick with the clunky mess of the Pro Controller. It’s this unfortunate quality of the port’s controls that really held me from enjoying myself more while playing this game, and it’s a real shame that a lot of the gameplay felt dull and unenjoyable solely because of the controls.

All in all, what seemed like an enjoyable, fresh and unique take on the management simulation genre was tainted by a poor control scheme, and while I do have hope that these control problems will be fixed, the point stands that the content provided in Holy Potatoes! A Weapon Shop?! is plentiful, and as long as you can withstand some horrendous controls and clunky menus, the game offers a wide variety of gameplay that will keep you entertained for a couple hours or minutes a day, with some quirky visuals and amazing music to boot. If you’re not a fan of the management sim genre, or you are very new to it, I would probably advise you to play a game like this on PC or mobile first, as the Switch’s controls and the initial complication of learning said controls may scare off newbies – but if you know you like the genre, and you’re looking for a solid gameplay experience with a buttload of humour on the go, then Holy Potatoes! A Weapon Shop?! on Nintendo Switch, is a game you simply can’t pass on.