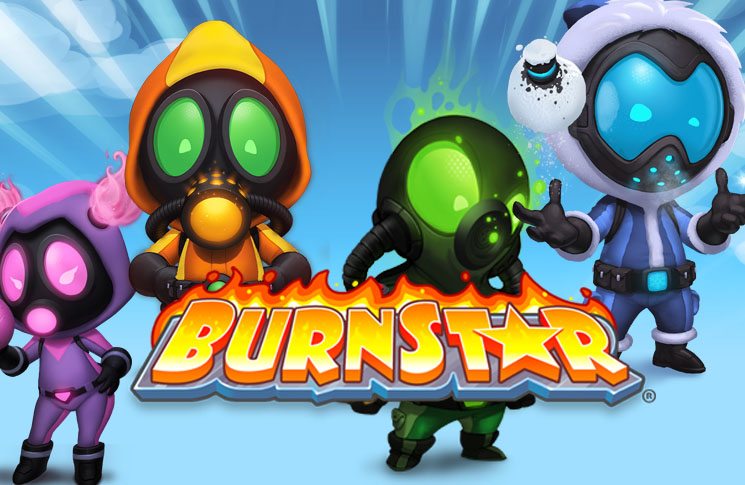 Burnstar is a game that lets all your pyromancy dreams come true. It’s a fun game that tests you with puzzles and rewards you with being able to blow up the level assets and bad guys.

Burnstar is a fairly quick and easy game where you can literally watch the world burn all for the sake of saving the world.

Burnstar is actually fairly simple with gameplay elements. You’re able to choose one of four characters, each with a unique ability to help get through the level. The levels themselves are puzzles, making you choose how best to set everything aflame to burn as much of the assets as possible.

Depending on which character you choose you can either dash, defend with a force field, control ice, or clone yourself and essentially teleport. Each level is small with flammable boxes and other objects to get in your way such as buzzsaws. The levels look kind of like a maze where you have to blow up certain parts to make a path for yourself.

Each level has a limited number of bombs, color-coordinated to your character, that you can pick up and use. When you burn Evil, Inc.’s evil goo, it produces stars for your characters to collect. When you collect enough stars, the large star that is the end point of the level begins to glow, signaling that you can move on to the next level. If you don’t place your bombs in a spot that maximizes its explosion — such as reaching as many flammable boxes and goo as possible — you may not be able to complete the level.

Yes, the point of each level is not to get to the other end, but to collect as many mini-stars as possible. You can only collect mini-stars in your color as well. For example, when I burned something, the stars would appear in Kris’s color and vice versa. You only need a certain percentage of the mini-stars to move on as well as a certain percentage of burning everything. However, if you get 100-percent for both, you’ve 100-percent the level.

While the puzzles were great, we had a lot of fun with the boss levels as well. For example, the boss at the end of the first world reminded us of a Pac-Man level. Our characters were in a maze-like area and trying to avoid an evil clone that routinely set down bombs while chasing us. The maze was created of flammable boxes, so not only did we have to collect our mini-stars while avoiding the clone, we also had to avoid all the fires that were being set off! It was an exhilarating rush and a great break from the puzzles of the normal levels.

The graphics were crisp and clean, the characters vivid with fun designs. The main quartet looked appropriately like a bomb squad but were distinct enough from the backgrounds that it wasn’t easy to lose them in the chaos from blowing everything up.

They each had their own color and their own colored bomb as well making co-op easy. The designs were fun and some of the levels were done well enough that we did get tripped up here and there.

We found ourselves bobbing to the music, even during the short loading screens. The tunes were great, setting the rhythm to the action of the levels, and we were never bored or annoyed at the music.

The sound effects of game were enticing as well. Especially the burning… we often found ourselves burning something and instead of figuring things out, we just watched the flames work its magic.

The premise of Burnstar is to save the world. You and the rest of the bomb squad are chasing after Evil, Inc., an organization trying to destroy their homeland.

So, essentially, you’re burning stuff up to save the world. It’s a worthy cause. While Evil, Inc. is trying to destroy the island and cover it with their evil goo, Burnstar and friends are eager to stop the corporation by destroying the goo and collecting stars.

Burnstar has decent replay value. Having single and co-op modes, four different characters and abilities to choose from, and multiple ways to solve puzzles, it’s a lot of fun to pick up again and again.

Burnstar is the type of game you can pick up and play where ever you are. The burning gives a lot of satisfaction and some levels are easier than others to 100-percent. Overall, it’s a great game to play with friends and fairly casual enough to sit back and relax with.