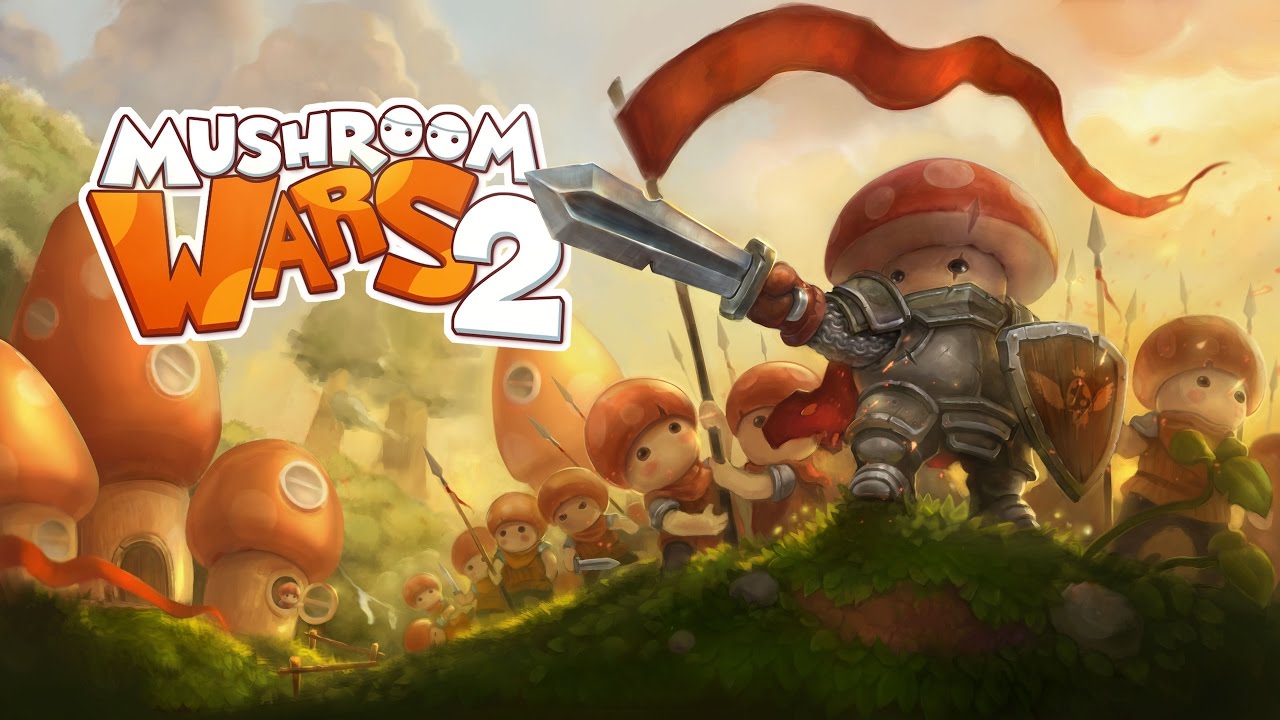 The original Mushroom Wars was a charming real-time strategy title that, while simple, was fun and required a decent amount of strategy to succeed. It was only a matter of time until developer Zillion Whales made a sequel it is now out on the Nintendo Switch titles Mushroom Wars 2.

Mushroom Wars 2 is a fairly basic strategy game where you need to capture buildings to generate your troops and these troops are then sent on a one-way mission to claim the opposition’s forts and buildings to ultimately overwhelm them. There are some special buildings available that help with defense or support, but in the end Mushroom Wars 2 comes down to the numbers of your troops, meaning the largest army almost always wins.

While a story is told through wordless painterly scenes of elder mushrooms passing knowledge along to the younger warrior mushrooms, it’s bare bones and not meant for anything other than pushing the narrative forward.

Mushroom Wars 2 is not about the story though, in fact, it is readily apparent that this game stems from the mobile scene with its presentation and simple premise. To put it simply, I’d much prefer getting straight into the gameplay over watching non-interactive exposition.

From the start, Mushroom Wars 2 stands out in the real-time strategy genre by focusing on buildings.

Your units do not fight one another as they would in RTS titles, instead, the core focus centers around the structures in fixed positions on the map. You can still build towers that will attack enemy units within their range or you could use one of your hero abilities to affect enemy units, but the core of the game centers around controlling static points.

There are three main types of buildings: Villages, which produce units, Forges, which enhance the attack and defense of your units, and Towers, which fire at enemies in their range and are harder to capture. Villages automatically produce more units for you over time and can be upgraded three times for faster production and a larger maximum population.

Forges don’t produce units at all, and while having more is better, the diminishing returns on the power increases mean that you’ll rarely need more than two at a time. Towers don’t produce units either, but their offensive capabilities make them ideal for holding chokepoints on maps and acting as staging areas for attacking enemy structures.

Mushroom Wars 2 takes cues from many other strategy titles where your main goal is to take over enemy settlements by generating enough troops from your own establishments. Constantly monitoring your production of these troops is crucial in order to take over the enemies settlements and in turn control the whole battlefield. You can build defenses to people enemy forces, but your main goal will always be to create the largest force to overwhelm your opponent.

Each battle starts off basically the same, taking over neutral sites and then using those increased numbers to take over enemy settlements. The trick is to take over mushroom sites that are closer to your main establishments, so you can have a steady swarm of troops nearby in case you’re attacked. To level up buildings you must essentially sacrifice your soldiers to in multiples of five, then ten and each number doubles from there. Upgraded settlements spawn greater troops and increased production which is necessary for winning.

Heroes are new to Mushroom Wars 2 from the original and they add some much-needed complexity to each battle. You can select one at the beginning of each match, whether you’re playing the campaign or multiplayer. They don’t show up in battle, but instead carry a unique loadout of new special abilities. They can speed troops up, add to morale, or sneakily take over unguarded enemy settlements.

One thing that I didn’t really care for was the control scheme. You would think, being that this was originally a mobile title, that there would be touch controls in handheld mode on the Switch. Unfortunately, touch controls are not included, but using the analog stick and buttons was serviceable if not always intuitive.

You have to hold down the R trigger to move units between buildings and the A and B buttons can send units out or be double tapped to upgrade buildings. The left trigger allows for micromanaging specific forts, but is only really needed on the higher difficulties in the campaign or against other players.

Mushroom Wars 2’s Campaign mode is split into between two episodes with upwards of 50 levels apiece, including seven tutorial levels in the first campaign with some being mandatory to advance on. Episode 1 is titled Mosquito of a Dead Man and has you playing as the basic Mushroom warriors looking to fend off invading forces and quell insurrection within your cute little mushroom realm. Episode 2 is titled Pahom’s Rachitis and has you take on the role of what appears to be “zombie” mushrooms as you engage in a quest for power and conquest. Each campaign lets you choose between two heroes from that particular race, each with their own abilities.

Included as one of the modes is an online PvP mode which is surprisingly detailed for such a simple game. Matches were easy to get into and involved a decent amount of strategy if you wanted to conquer your opponents. There is even a matchmaking system that will match you with players of similar skill. Lastly, you can set up custom matches where you can select the number of players, whether those players are real or AI and you can choose from a range of over 50 maps depending on the player count.

Finally, Mushroom Wars 2 is lovely to look at, with vibrant colors and a charming art style. While you can tell this is a mobile title and isn’t pushing the envelope, the presentation is still beautiful, with beams of sunlight casting across lush green forest floors and reflecting light in watery cave pools. The sound design is also well done with mushrooms letting out cute shrieks when attacking and the music fitting the matches.

Mushroom Wars 2 is a gorgeous, fun little title that while appearing simple has a surprising amount of depth to it. If you enjoy RTS games or want one that you can pickup-and-play easily, this will make for a fun experience that won’t frustrate you. Just don’t go in expecting everything too much depth, or an overly intuitive control scheme.