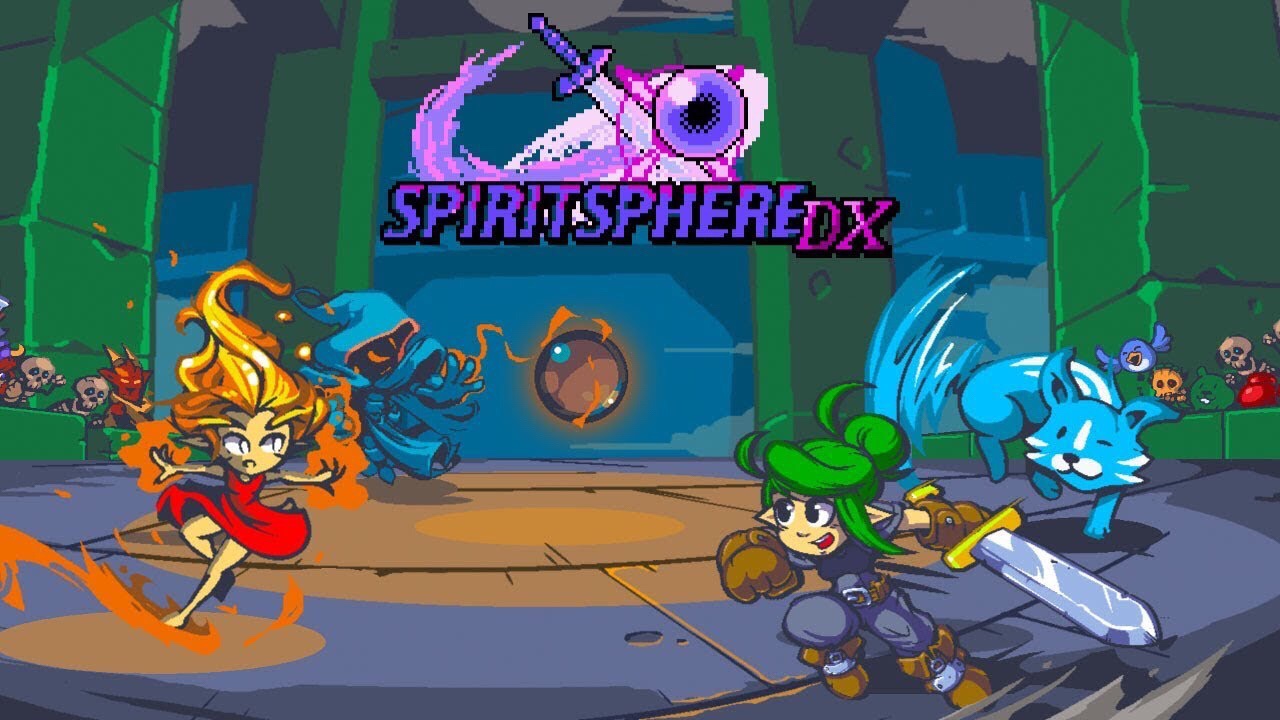 Its Zelda meets tennis in this epic mashup like you’ve never seen before from Fabraz and Eendhornn games. Well, are you ready? Get your tennis shoes on, get your master sword at the ready, and let’s hit the court in our review of SpiritSphere DX!

Fans of Slime-San may not need an introduction on Fabraz, the publisher behind SpiritSphere DX. But do you know Eendhornn studios? Eendhornn the studio behind Spiritsphere DX, is a game developer who makes smaller projects for their own website and steam platform. SpiritSphere DX is their first title to ever hit a console! Will we see more projects from them on Switch in the future?

Did I mention Zelda meets tennis? Well, the game features the good old tennis gameplay, but without the racket! But if there’s no racket how do you hit the ball? You, the player Lin (or any of the wide cast of characters) use your sword to swing and hit the ball back to your opponent. Lin can charge up her sword swing (like Link in Zelda) to unleash a powerful swing to hit the ball back. Need an extra bit of power? Various power-ups drop on the court such as a potion that increases your size, and a bomb that you can chuck at your foe! Feeling like the type of person who likes to customize? You’re able to exchange coins at the fountain for unique spheres that’ll help change up your gameplay.

Let’s dive into the various game modes that can be found within SpiritSphere DX. The first mode “Regular Match” simply lets you play a good old match against CPU opponents! The next mode is a campaign-style mode that lets you compete on a variety of different courts across 10 different levels with CPU opponents. The third mode is “Squash” which has you bouncing the spirit sphere off a wall, but you’re only able to hit it when it’s your turn. Next up you have a Practice mode, and a Boss mode that you can sharpen your tennis skills in! The final mode, Hand2Hand was probably a selling point for myself, but this mode lets you use your Switch vertically with both Joy-Con attached in handheld! One player plays on the top Joy-Con, while the Second player plays on the bottom Joy-Con allowing for local multiplayer with one system!

Fans of the classic Zelda titles will absolutely love the graphics and visuals in SpiritSphere DX. Both feature a pixel art style that are very reminiscent of older Zelda titles. Vibrant colors and visuals that give the game a classic vibe and feel. The soundtrack also delivers in the regard to what I said above, 8-bit styled sounds & more deliver a pleasant and enjoyable gaming experience.

Like Slime-San, I enjoy everything that comes from Fabraz and SpiritSphere DX was no different. Eendhornn really captured the essence of tennis gameplay in this title and definitely made it their own. With a variety of game mode differences, the ability to customize your sphere via the in-game shop, to the fully unique Hand2Hand mode, there was nothing not to love in SpiritSphere DX. The art style and visuals are always high points for me, as I got the classic Zelda-like vibe through the entirety of play.

Does Eendhornn’s game capture the true essence of tennis in SpiritSphere DX? They definitely do in this Zelda meets tennis like gameplay. A variety of gameplay twists are offered, a wide variety of characters/skins, and more are all offered and I couldn’t ask for anything more. Tennis like you’ve never seen before is the line I went by while playing SpiritSphere DX, and I think it is definitely worthy of a purchase.