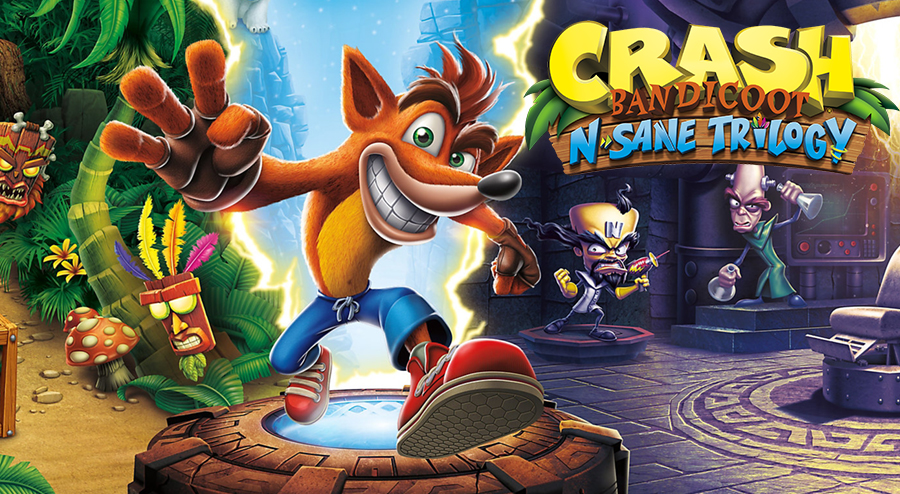 You have heard what everyone else has said about Crash Bandicoot N. Sane Trilogy and now it’s our turn. Crash and Coco are back and this time in colourful HD. It’s time to give that crazy Doctor Neo Cortex what for as we take on what many consider the “Dark Souls” of the 90’s.

Crash Bandicoot N. Sane Trilogy is a remastered collection of the first three Crash Bandicoot games that released on the Sony PlayStation back in the mid 90’s. The remastered version was first released as a timed exclusive on PS4 last year and was a very sought out title on the console. Now that the exclusivity period has lapsed, Crash has now seen release on PC, Xbox One and the Nintendo Switch.

For those of you that have never played a Crash Bandicoot game or perhaps your memory on the story is a little hazy, allow us to fill in the blanks. Crash is a bandicoot that was being experimented on by the dastardly Dr Neo Cortex. Crash manages to escape but has to stop Cortex’s plane whilst rescuing his girlfriend who was captured by the crazed villain. After foiling his plans in the first game, Cortex convinces Crash that he needs his help to recover special crystals in order to “save” the word in Crash Bandicoot 2: Cortex Strikes Back. This of course, is just another evil plot that Crash will have to foil. In Crash Bandicoot 3: Warped Aku Aku’s evil twin brother has escaped and is working with Dr. Cortex in order to bring the world to its knees. It’s up to Crash and Coco again to put an end to Dr Cortex and Uka Uka’s evil plan.

Being a remaster, Crash Bandicoot N. Sane Trilogy has had a serious graphical overhaul and has been brought into the 21st century. The polygonal aesthetic of the originals has been completely removed and given a sleek, more cartoony design. The charm of the original games is still there though so for those that are looking for that nostalgia kick, will not be disappointed. The music and voice acting is clearer and feels more refined. The levels feel more natural and special attention has been given to the background to make them feel more fuller and worldly.

It must be noted that the Switch version has had a number of graphical sacrifices in order to maintain performance. The game runs steadily at 30 fps in both docked and handheld mode but Crash Bandicoot N. Sane Trilogy only has a maximum of 720p on TV and 480p in handheld mode. This seems like a big issue when comparing it to the Xbox One Version and the PS4 version that both run the same at 1080p and the PS4 Pro Pushing 1440p. For the sake of this review, I will try to refer between the original games and the Switch Remaster because if graphics are what you are really after, then you should probably get this game on Xbox One or PS4.

You could describe Crash Bandicoot N. Sane Trilogy as a 3D platformer/runner with its own myriad of collectibles. The gameplay itself is a rather linear affair. Players will run, spin and jump their way through multiple levels whilst avoiding hazards like potholes, lava pits, lakes, enemies, etc. some levels. There are three types of course sections that could appear in any of the levels. In-to-screen, Out-of-screen and side-on 2D. Side-on 2D is your typical platfromer type courses and usually has Crash traversing from left to right. In-to screen has the player behind Crash and have navigate him to the end of the course in front of him. Out-of-screen has Crash face towards you as he is running away from a large boulder or dinosaur.

I touched on collectibles before and there are a few. The wumpa fruit look like apples and by collecting them, you will gain an extra life. The crates that some of the wumpa fruit are contained in are also collectibles and destroying every crate on the level, including the TNT and Nitro boxes will reward you with a Gem. On some levels, there are more than one gem to collect and they may be hidden routes that can be explored after finding a special gem on a later level or by fulfilling a secret criteria like completing a particular level without dying or breaking a crate. There is also a time trial on each level that if you beat will also give you another collectible.

If you are playing casually, you may not care too much about smashing every crate or speed running a level as fast as you can. If you are a collectionist however, you will certainly spend a fair share of your time dying between checkpoints because you missed something. The collectionists will surely get their money’s worth as regards to time spent playing this game. Between the three games, there are about 100 levels including two new levels that were added as DLC to the PS4 version and were removed from the original games. Each Game has its own Save/Load slots plus an autosave feature. So you can jump between each game without worrying about losing progress on the other games, providing you save before Switch games of course.

Each level has a particular theme like prehistoric, underwater, middle ages and so on and has enemies and hazards representative of them. For example, the Middle Ages levels have sword swinging knights and spell casting wizards. The underwater levels have sharks and anchored mines and so on. Crash can lose a life with a single touch of an enemy or hazard but if he has found an Aku Aku mask, he gains himself a lifeline of being able to sustain another hit. Doing so will remove the Aku Aku mask so you will still be vulnerable until you find another. Some levels have up to three Aku Aku mask and when combined, rewards Crash with temporary invincibility that allows him to defeat enemies and destroy crates with a single touch. It is worth avoiding getting hit by enemies just to get all three masks as it the temporary invulnerability will gain you considerable headway on the given course.

Crash isn’t the only playable character, though he is the predominant one. His sister Coco is sometimes playable on certain levels and in some games, she is a swappable character after playing a certain number of levels. Though Crash Bandicoot suffers from lack of co-op multiplayer. Players can always take it in turns every time someone dies and with the extra option of play as Coco on some levels adds a little variety.

As regards to controls, the remaster has had some adjustments but the core mechanics are the same. The movement controls of the original trilogy, were designed with the Sony PlayStation’s D-Pad, as the dual analog controllers were not released until after the first game launched. The movement can be a little stiff at times, especially on the vehicle/animal riding levels.  Perception plays a key part in these games as you do have to carefully judge each jump as it is very easy to fall short. The 2D side-on sections are okay but the in-to-screen and out of screen sections do take some calculated manoeuvres.

To be fair, Crash Bandicoot N. Sane Trilogy, brings back gaming of yesterday and the graphical spit polish helps to give the game a fighting chance against the many beautiful looking games already on the market. Game performance has had some sacrifices and it is noticeable in handheld mode. The FPS does dip every now and again especially when there are quite a few instances being rendered at the same time. The Switch is a remarkable machine and it is incredible what it can put out with a little optimization. Compared to the original trilogy, the Switch version is a huge improvement but it does pale graphically in comparison to the PS4 and Xbox One versions. However, The PS4 and Xbox One are not as portable as the Nintendo Switch so you do have the added benefit of playing Crash Bandicoot wherever you want.

Three games in one package is always a bargain if the games are any good and I like to think that the Crash Bandicoot series still holds up today and I am not disappointed with spending $40 on the game. There is plenty to get stuck into and there is a little something for the casual gamer and the completionists. Every level has a relatively different theme from the other and though gameplay could be considered repetitive, there are some levels that break up the monotony by throwing in rideable animals or vehicles or secret routes to hidden gems. Whilst it is true that the more definitive version of Crash Bandicoot N. Sane Trilogy are perhaps the PS4 and Xbox version due to being better graphically. The Switch still provides the same exact gameplay and allows the adventures of Crash and Coco to be enjoyed anywhere.

*Game was bought personally and not provided by Activision