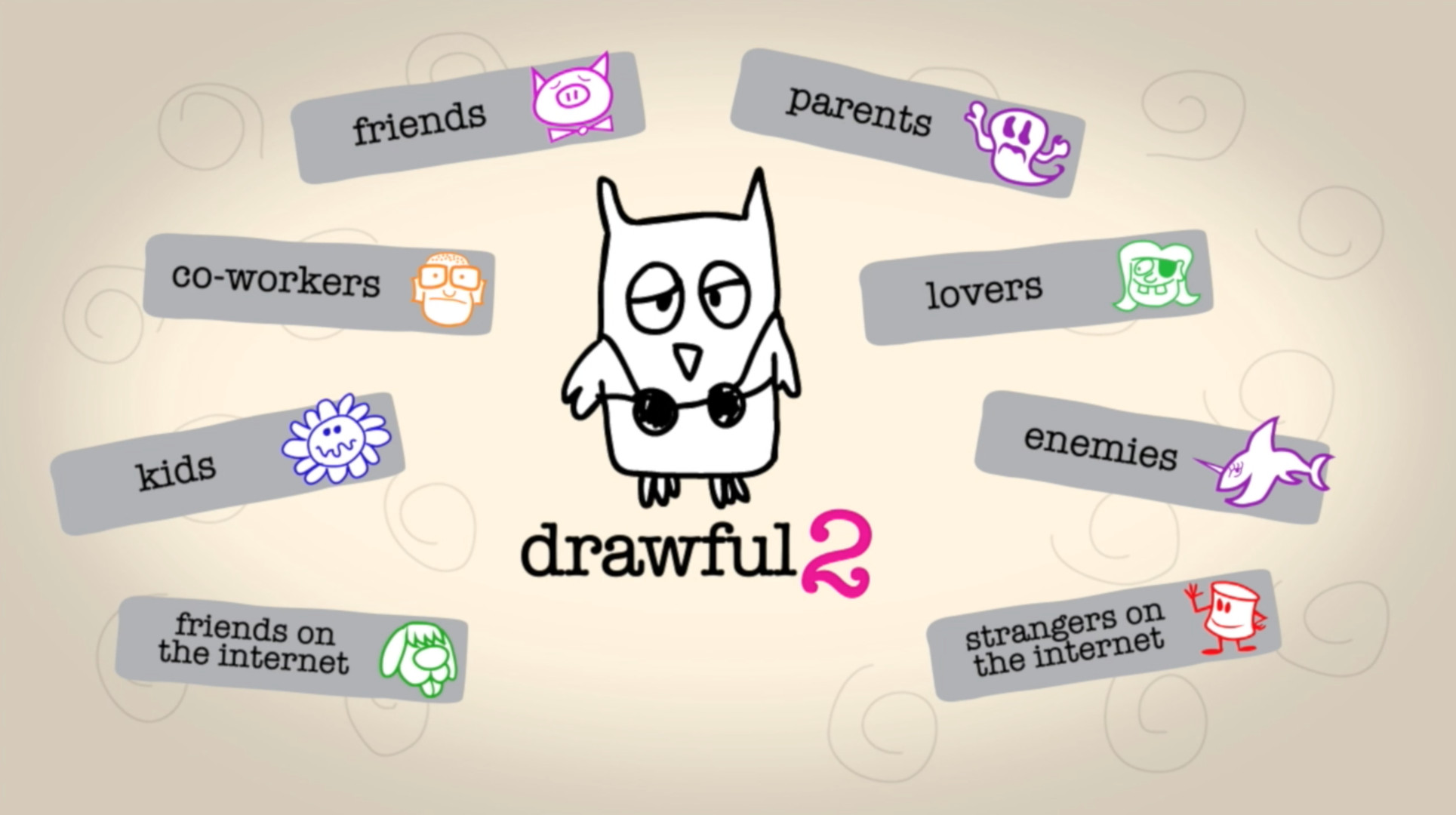 Drawful 2 is a party game that incorporates both the Nintendo Switch and using one’s phone or tablet to draw hilarious pictures of random words and phrases, such as “starfish mating” and “party witch,” for everyone else to guess.

It’s like Pictionary but with technology and wacky prompts. It’s definitely not one you want to play alone!

The gameplay is pretty simple. Using the Nintendo Switch as the central port of the game, if you will, Drawful 2 will generate a room code for your party to input on their phone or tablet on the site jackbox.tv. Once everyone is connected, you use your device to draw a picture of yourself as part of your name tag, then move right onto drawing your prompt. No peeking at anyone else’s work!

Your tablet or phone is like your personal notepad. You’re only allowed to use two colors in your drawings and the colors are randomly chosen for you. There’s no eraser so when I dropped my iPad my leg drew for me which added some character to one of my drawings for sure.

This is a cool way of doing things, however it kind of makes the game easy as well. The prompts given by the game are so out there and random that you can easily use process of elimination to guess what the real answer is because no one in your group would ever think of “noodle arm.” But also, while we played with our cousins, we noticed the real answer was in the same spot on the screen for every single drawing. So we were all getting the right answer without even thinking.

That the was main issue we had with the gameplay. It may be a big coincidence, it may not happen when there are more players, or it may need a patch to be fixed. It didn’t hinder the fun too much, however, but once we realized it, that was in the back of our mind for the rest of the game.

The game’s graphics are a fairly clean sheet, keeping everything minimal while imitating blank pieces of paper and pencils while waiting for everyone to finish either their drawings or taking a guess as to what the featured drawing is. Most of the other graphics are from the players themselves when they showcase their art skills when drawing their given phrases.

When your own drawing is being shown on the big screen, you get a fun phrase on your own screen simply stating something along the lines as, “You drew this.” Along with some snarky comment about your drawing since it’s supposed to be terrible.

The music was understated. In all honesty, I don’t remember too much other than the sound effects that represented each person, especially since us players were too busy laughing and talking about the pictures and phrases!

Honestly, the music wasn’t really important or loud for this game. The sound effects were more prominent, each player having their own sound effect for when they joined the game, submitted a drawing or guess. They were quirky, one of the sound effects being a fart noise.

With the endless combination of phrases and words Drawful 2 has up its sleeve, as well as all the possibilities players can come up with when creating their own episodes of the game, Drawful 2 has plenty of replay value. The game supports 3 to 8 players, as well as giving the option of having an audience join in the fun when it comes to voting on what a picture is. We had a great time playing with and creating hilariously bad pictures for each other!

Overall, Drawful 2 is a fun experience with friends and family. The prompts are out of the ordinary and since not many people is an artist with their finger on a screen, the drawings are hilarious as are the guesses.