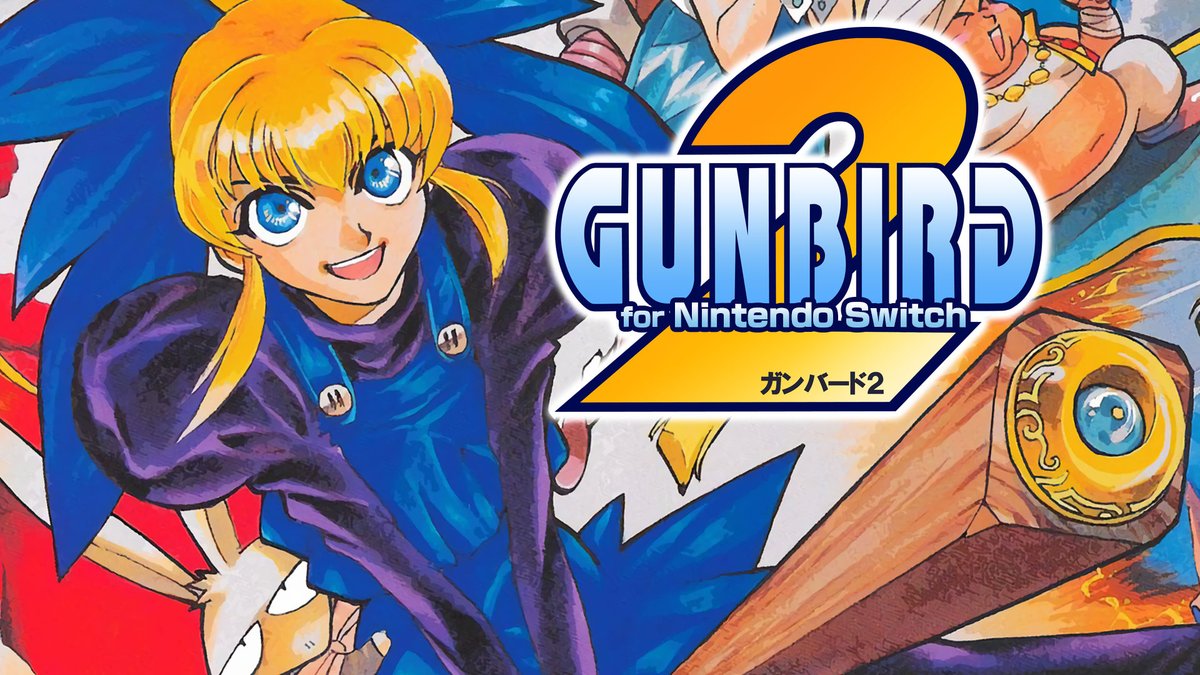 The Nintendo Switch has become a gold mine of old-school shmups (shoot ‘em ups) and bullet-hell shooters. From Ikaruga to Tengai, the list of quality shooters is staggeringly impressive. Released in arcades by Capcom in 1998 and then ported to the Dreamcast in 2000, developer Zerodiv has brought another Psikyo shooter to the Switch with Gunbird 2. This builds upon the prequel’s gameplay and features, adding several new characters, updated visuals and some zany but fantastic writing.

The story centers around the unlikely tale of a search for some kind of magic medicine and Gunbird 2 focuses on a variety of characters, all of whom have different attributes and strengths. The differences in the playability and the handling of the characters is pronounced and these are not merely aesthetic changes. Each character possesses a number of different methods of attack; the standard shot which can be powered up from downed enemies, an area-clearing bomb attack, a melee-like attack which is very powerful but forces players dangerously close to the enemy, and a charge shot. All the attacks – even the standard shot – differ for all the characters, which means that for the completionists, there is plenty of reason to keep coming back. Gunbird 2 encourages you to experiment with each character and is more rewarding due to the vastly different dynamics of gameplay depending on who you pick.

I’m assuming if you’re reading this review you’ve played quite a few shoot ‘em ups, so the first three attacks are self-explanatory. But there’s a catch to performing the charge shot. You have level gauges that slowly get filled up when you shoot enemies, it’s basically like the gauges in most fighting games. When one or more level gauge gets filled, you can perform your charge attack. The higher you build up the gauges though, the stronger the attack will become. The melee attack is definitely the most useful and powerful attack in the game, but using it can be risky. It’s a close-up attack that you need to perform right in front of an enemy, but it’s worth using since it causes a great deal of damage. As with the charge shot, you can use it once a level gauge is filled up and this means you can’t just use this attack as much as you want. Some strategy is implemented, so you’ll need to figure out when to use them for a certain situation or enemy.

Any power-up icons collected after reaching the max weapon level adds to the player’s score. Bombs are also a scoring factor, since a bonus point is given based upon the number of enemy bullets affected by the bomb turning them into coins. Gold coins are also hidden within certain enemies and level obstacles, and collecting them rapidly will create a chain, increasing the point value of each successive coin picked up. Gunbird 2 is fun to play on its own, but thankfully has enough scoring methods to satisfy those who enjoy playing for high scores. I also appreciated how different sets of high scores are maintained for each of the different difficulty levels, meaning you can se if someone has a high score by playing on the easiest difficulty reducing their credibility.

Graphically, the backgrounds and characters are nicely drawn and well animated, and I encountered no slowdown. Towns, villages and castles are rendered in a cartoon style similar to the original Gunbird, and are populated by little sprites running around as the action takes place above them. The bullet sprays in this game are impressive, but by and large are nowhere near as complex as Danmaku 3 or Ikaruga. The music is upbeat and gloriously cheesy, punctuated by all manner of screams, shouts and explosions which have been well implemented and performed. Gunbird 2 can be played by any anyone due to the extremely well-handled difficulty settings. A shooting novice player can have a great time on ‘baby’ and ‘child’ difficulties and start to be stretched by ‘very easy’, while a seasoned shooting fan will still struggle to make it through the higher difficulty levels in one piece.

A problem some may identify with is how short Gunbird 2 actually is. Vertical shooters have never been noted for their length, but some of the levels can be completed in only a few minutes and this is before the boss encounter takes place. This won’t be perceived as a problem by those who are already sold on this type of title, but a newcomer may well feel short-changed by how little there is to offer. If you look past the roughly 15 minutes it takes to complete a single playthrough, each character has multiple endings and even different combinations of characters in multiplayer mode can unlock a special ending.

Overall, Gunbird 2 is easy to recommend for any fans of old-school shooters and may be the most accessible with a variety of difficulty options and parameters. Even if it only takes 15-30 minutes to complete a playthrough, the action is fun and intense the whole time. Plus, coming back to increase your high score and gradually improving your skills by raising the difficulty will keep engaged, even if it lacks online leaderboards. Give it up for Nintendo, preserving these classic shooters and bringing them to a new generation to enjoy.