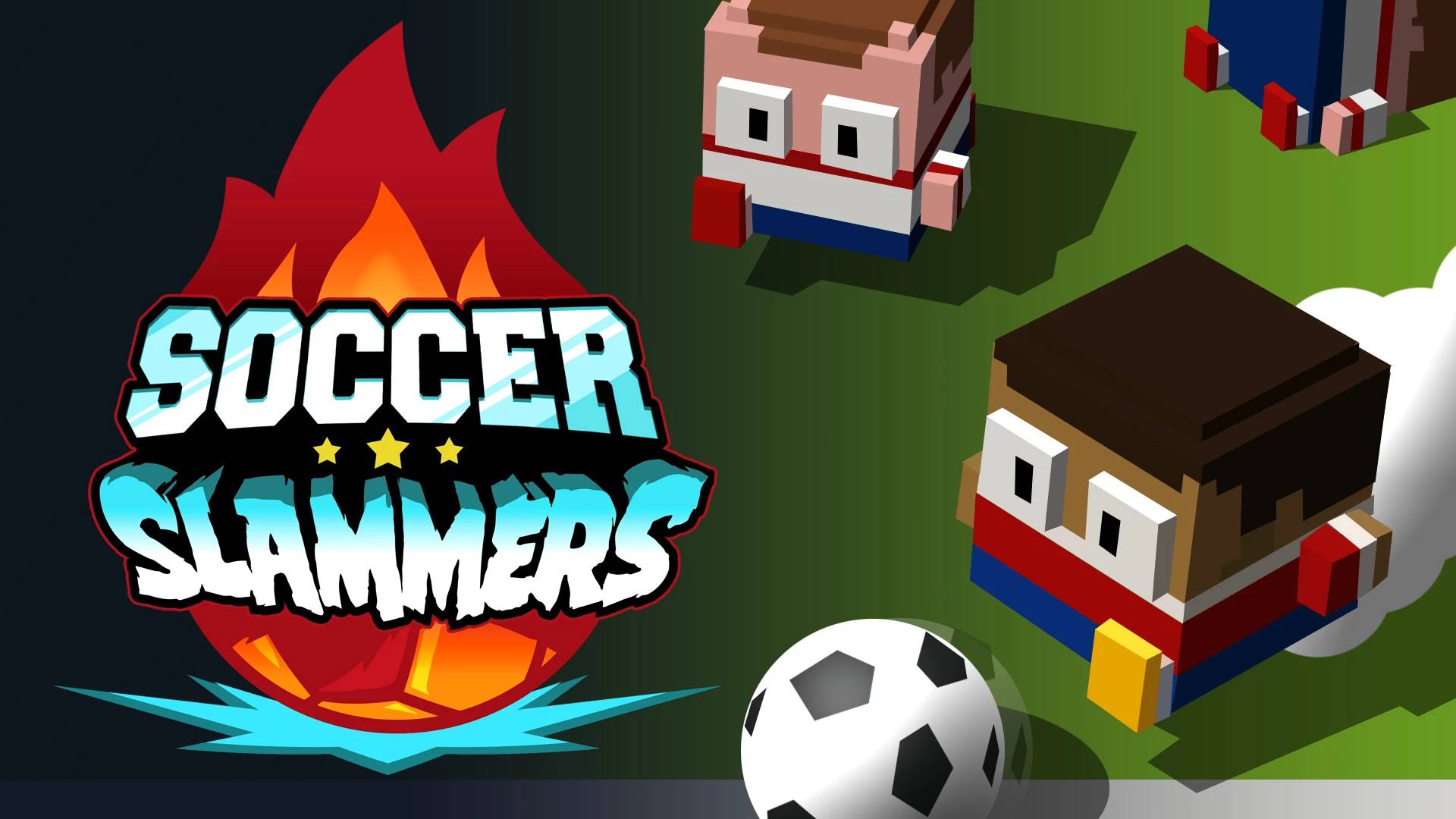 First revealed in early 2018 and released this June on Nintendo Switch, in time for the World Cup in Russia, Soccer Slammers is an indie developed and published game by Jools Watsham and his team at Atooi games. It is unapologetically an arcade soccer game where it’s only about the game. There isn’t a story or campaign outside of the quick play matches or the World Cup games where you face 32 teams for world domination. There aren’t any cut-scenes or dialogue either, but, why would there be? It’s just drop in and play matches either alone or with up to 4 friends on one screen. Setting up matches is quick and easy and you can be ready and on the pitch in a matter of seconds, playing your short 2 or 4-minute game, with a 20-minute long match if you desire to play that long.

On the scale of what Soccer Slammers has to offer, if you want variety and depth in your soccer games, Soccer Slammers may not be for you. Soccer Slammers isn’t trying to fill a void of realistic gameplay or even match against the likes of Mario Strikers and it’s in this way that the game carves its own unique niche of arcade soccer games. Soccer Slammers is closer in gameplay to the fast and frantic matches of NBA Jam in that possession changes happen often, you will turbo boost and smash huge kicks often and with ease. Soccer Slammers finds itself being the go-to game during those small burst matches when you only have a few minutes to play a Switch title.

Each match is a 2, 4, or 20 minutes of tackle, boost, pass, shoot and win, which really doesn’t allow for much breathing time. Nearly every possession starts in the center of the field and is accompanied by one team trying to tackle and steal the ball while the other team lines up a short from two-thirds across the field or closer and slams the ball towards the net. Several of my shots from the far side would ricochet and get past the goalie in a way that seemed to take the skill out of soccer. With the matches going into the 10+ points range often, scoring a goal started to lose its luster after a few matches.

Aside from the aforementioned 2 on 2 matches of a mix of human and CPU controlled players, there are only those two modes. The World Cup puts two humans against each country’s teams in a bout of the World Cup, but other than that there aren’t other modes of play in Soccer Slammers. There are 40 teams to choose from, and since the game isn’t licensed by FIFA or any governing body of soccer, there are only blocky characters with no names associated with them. You’re either player 1, 2, 3, or 4 and noted by the small number accompanying your player on the pitch. There is a Mudd team, that has characters from Atooi’s Mutant Mudd series being represented, but outside of that, it’s just the World Cup teams, as well as some that didn’t make it…’Merica!

Musically, Soccer Slammers doesn’t have much in the form of music, other than some grating background tunes that you can easily mute or turn down through the settings. I prefer my own music when playing along. You won’t spend much time in the menu, as dropping into games is what you will want to do, but when you are in the main menu, you may find that the repetitive nature of the tunes to be agonizing to the ears.

As for the game’s audio, the sounds of Soccer Slammers include some crowd music, which will ramp up as it should when your team scores, or gets close to scoring, but since the matches tend to be in double digits you will hear a lot of cheering. There are other subtle sounds throughout the gameplay, like when your charged shot swooshes across the field into the goal or the sounds of tackling players and someone landing on their back. The crowd will often give me feedback on how well or bad I am doing, which is a nice added touch to the otherwise typical cheers when you get a goal.

Soccer Slammers has a blocky art style that is unique to itself. It’s not going to be a game you will ooh and awe over visually or in the area of gameplay mechanics. It will be a game though, that you will find yourself gravitating towards when your friends come over. It’s great for quick pick up and play and because of the simple nature of the mechanics very easy for anyone to pick up and learn. The total package of Soccer Slammers may leave some people depressed, but if you take it at face value for the cost of the game and the enjoyment in the short burst of soccer, you won’t be disappointed.

Soccer Slammers won’t be for everyone. But it’s a short and sweet love letter to fans of arcade-style sports games that just want to get in, play a quick match, and get on with life. After all, Soccer Slammers does allow for some great couch co-op options!