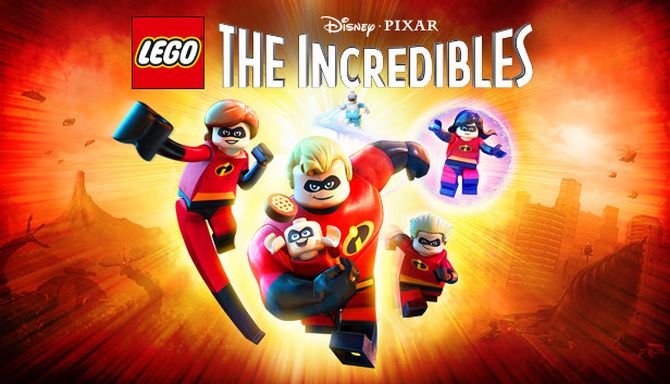 An incredible and bricktastic adventure beckons!

When Pixar’s The Incredibles debuted in cinemas in 2004, it was the cinematic story of a family of former superheroes and gifted offspring.  It resonated with many who watched the film and prompted the majority to demand a sequel and let’s be fair, the world does need more Incredibles. Thankfully, Pixar agrees with that statement and produced a much-wanted sequel, which released a mere 14 years after the original. (Talk about being in it for the long haul.)

But, just in case a long-awaited sequel wasn’t enough, we also got a video game adaption as well, except, instead the game we got is yet another LEGO adventure by the talented TT Games and instead of being focused on the events of the second film, the game also features missions relating to the first film as well. That’s right, not only does LEGO The Incredibles offer yet another great LEGO experience, but it provides players with a double dose of their favourite superhero family. The only thing is, if you have yet to see the second film, you probably should before you play this game, since there will be lots of spoilers.

Typically, this is the part of the review where we would go more in-depth about the game’s story, but because it is major spoiler territory, there is going to be a lot about the game’s story we won’t say, including how some of it is tied into the levels, as we would actually rather Incredible fans to go into the second film spoiler free. So, instead, we’re just going to bring up the point we made earlier and say that the game takes players through both films, starting with the second film and Elastigirl’s superhero exploits and then when players beat all of the missions for that mode, missions pertaining to events from the first film will be playable.

Some levels and cut-scenes try to match the films, word for word, but there are some differences, in the form of other characters now being present during certain events, so as to allow your Player 2 to play as someone, as LEGO games are as much about playing with a friend, as they are about playing alone.

The game’s missions are not overly long and you can easily breeze through them all in under 10 hours, but with LEGO The Incredibles being a LEGO game, missions are not meant to be played just the once. Sure, you can opt to beat the game’s missions, walk away and not look bag, but if you’re a completionist and want to get the game’s 12 special vehicles, you’re going to have to make the most out of Free Play mode and collect all 120 minikits. Then when you’ve done that, it’s time to hit the streets of Municiberg and New Urbem, because many other collectibles of the usual variety, await. (210 Gold Bricks.)

In keeping with the gameplay we’ve seen in the more recent LEGO games (Marvels Super Heroes 2 and Ninjago Movie Videogame,) players are free to roam a sandbox environment that is a LEGO replica of locations seen in both Incredibles movies. They can run, jump, fight enemies and of course, build amazing structures. Except this time around, the structures players can make are either over-sized devices, or Pixar Family Builds that results in the likes of a LEGO model of Pizza Planet from Toy Story. Not only can you access sets from other Pixar films, but these sets will let you unlock a new character from the associated film, so if you were secretly hoping you could play as Wall-E or even Monster Inc’s Sully in LEGO form, you absolutely can.

All builds requiring a specific number of Incredibricks, both in and out of missions, so as long as you collect as many as you can when running wild, you will be building everything in no time at all. But, with the Pixar Family Builds, once you have obtained your new character (of which there are 113 of, not counting the 12 optional custom characters you can create,) you will  want to play as them and use their special skills to solve a puzzle that can earn you 1 of the game’s 12 Red cheat blocks. (Did someone say stud multiplier?)

To even be allowed access to such epic builds though, players will need to complete Crime Waves and trust me, you will want to complete them. With Municiberg and New Urbem made up of districts, one district at a time, will come under attack from criminals and as a superhero, it is your duty to help wherever and whenever you can. One minute you can be tasked with rescuing civilians, preventing bank robberies, or even returning stolen vehicles, but you can only undergo these historic acts, as long as you talk to NPCs in need and accept their challenges.

I really enjoyed how the Crime Wave events were implemented into LEGO The Incredibles, as districts under siege, will take on a chaotic appearance, which includes police cars parked here and there, fires lit and criminals running riot and if you do 2 Crime Waves against the same kind of criminal organisation, you will get to go head-to-head against super villains and take them down once and for all. (Okay, you don’t get to kill them, but you can get them locked up and visit them in prison, if you want to.)

Once a district has been saved, not only will a Pixar Family Build become available, but your map will now show off the location of every race, Gold Brick and Incredibricks within the district in question. So, they’re certainly worth doing and the powers in this game are incredible. From flying, freezing objects and even mind-controller a groom to go through with his wedding, there are plenty of fresh takes on typical LEGO features to ensure this LEGO outing, is every bit of deserving a play though, as any other LEGO game.

Not to mention, your custom created character can have the powers you set them and the typical LEGO humour is well on form this time around. The voice acting isn’t too bad either, not everyone from the films reprised their roles for these outings, but a fair few did and they tie in nicely with the voice actors who try to honour their roles to the best of their ability. So, long story short, if you’re looking for a LEGO game that will impress you when it comes to visuals, soundtrack, content and character, LEGO The Incredibles is not a bad way to go!

The family that saves the world together, stays together and even if you get bored of playing as one member of the Parr family, with so many other characters available, in what is another family-friendly LEGO title, there’s bound to be someone who appeals to you, even if you must create them yourself. But, LEGO The Incredibles is a great little game that you can easily invest 20-30 hours into, in a bid to 100% complete it. LEGO and the Incredibles, is simply an incredible match made in heaven, so as long as you like one or both franchises, then this is a game you simply need to add to your collection!

Should you wish to check out another of our reviews, you can do so by clicking here