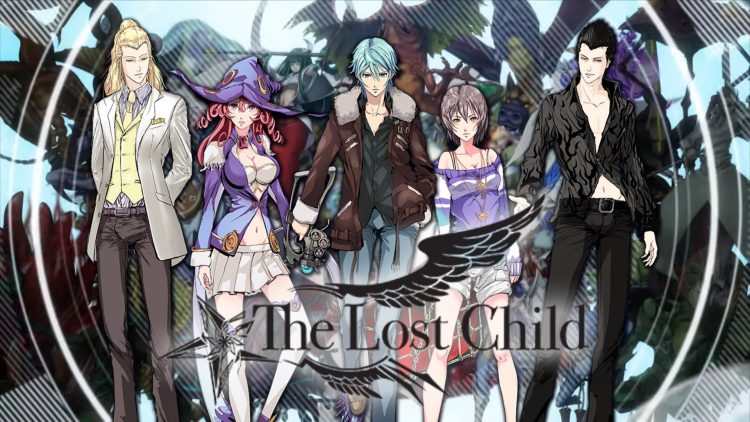 Back in 2011, El Shaddai: Ascension of the Metatron was released for PS3 and Xbox 360. With its stunning visuals, cryptic narrative and intense combat, it quickly achieved cult-classic status. Years later El Shaddai director Sawaki Takeyasu has returned with The Lost Child, a spin-off featuring an entirely new world and characters. While it ditches much of the visual flair and dramatic set pieces that made El Shaddai such a hit, The Lost Child more than makes up for it in intense turn-based combat and challenging dungeon crawling action.

In The Lost Child, you play as Hayato Ibuki, an occult journalist who suddenly finds himself mixed up in a war of celestial beings. Called Astrals, these demons, angels, and fallen angels are running amok in Japan, creating dungeon-like environments called “layers” that distort the reality around them. As God’s Chosen One it falls upon Hayato to use a powerful tool of ancient origins known as the Gangour to capture these rogue Astrals and convert them into allies. With his faithful angelic companion Lua at his side, Hayato braves the depths of the layers to save Japan from destruction of (quite literally) Biblical proportions.

If that summary didn’t tip you off already, The Lost Child has a lot in common with the Shin Megami Tensei series, and anyone familiar with it will immediately be at home with The Lost Child’s mechanics. Dungeons are navigated in a first-person perspective and are filled with dead ends and complicated twists and turns. Thankfully the game employs an auto-mapping feature, so you never have to worry about becoming lost. Combat is also similar to the SMT series – after capturing an Astral or two you’ll need to choose which to add to your party. In battle, each Astral has special skills that range from buffs, de-buffs, attacks, healing, and more. Knowing which buffs to apply, when to heal, and using the correct elemental skills against enemies is the key to victory.

While The Lost Child doesn’t do much to shake up the winning formula the SMT series has enjoyed for over two decades, that doesn’t mean it’s happy to settle for more of the same. The game does an excellent job of maintaining the solid base of an SMT game while modifying the finer details. For example, rather than level up Astrals through battle, you’ll instead gain good, evil and neutral souls after combat. These can be used to strengthen Astrals using a tablet given to you at the start of the game. Different types of souls are more effective on different types of Astrals, and which Astrals you decide to strengthen is entirely up to you. However, new skills are only obtainable through combat, with Astrals randomly learning and using a new skill after enough time spent in battle.

Another big difference is Chodenji, a shrine run by a strange man behind a monitor. In the SMT games, there are usually a shrine where a priest assists you in fusing demons together to form new ones, with each new demon gaining a combination of skills from the two or three demons that were fused to create it. In The Lost Child, Chodenji serves a similar, but more streamlined purpose. Rather than fuse your Astrals, you can swap skills between them directly. You cannot just give skills however – you can only swap. Figuring out which skills are best suited on which Astrals is an exercise in prioritization and party balance.

Once I got past the slow initial few hours, I began to really enjoy the game. Dungeons are challenging without ever being so hard I felt I was being cheated and combat is satisfying and quick. Between doing side investigations, appraising rare OPArts that can become powerful equipment, swapping Astral skills, grinding for more souls, and putting new Astrals in my party to uncover new skills, I found myself sinking hours into the game just adjusting and perfecting my party of Astrals. For anyone who enjoys exploring every nook and cranny of every dungeon for rare treasures and constantly tinkering with my team, The Lost Child delivers fun in spades.

The game is not without its faults, however. Visually the game is a mixed bag. While the art for character models and Astrals is excellent and help bring the world to life, dungeons have walls with low-resolution textures that look straight out of a PS2 game. Each floor is dark, drab, and consists entirely of repeating pieces thrown together in a different order. By the time I went through 3 dungeon floors I’d seen the same room repeated at least 15 times. I don’t need the dungeon to be a rainbow of colors and randomness, but a bit more visual and structural variety would have been greatly appreciated.

Audio is another area where I take issue with the game. The soundtrack is nothing special, with even the game’s boss battle theme being quiet and underwhelming. It’s adequate and fits the tone of the game, but every song is largely forgettable. Then there’s the voice acting. I know there are some people out there that are in love with NIS America’s dubs, but I can’t say I’m the biggest fan. More often than not, its borders on obnoxious, with more than a few lines aggravatingly overacted. Your angel companion Lua is the worst offender, always whining at Hayato about the littlest things throughout the story. She loves to talk so much she even throws out useless lines in the middle of battle, though thankfully there’s an option to turn that off.

The weakest part of The Lost Child, however, is its story. The beginning does an awful job of explaining anything. When Lua first talks to Hayato in his office about being the Chosen One, the game gives no indication that Hayato has never met Lua before. When Hayato’s boss sends them both off on an investigation as though Lua works for him it gets even more bizarre. Most characters have a secret or two to them, but you won’t discover many of them until much farther in the game, so you’ll go through segments of the game not knowing why you’re doing what you’re doing. The character Lucifel randomly popping in to say gibberish and give you a new demon at seemingly random points throughout the story only serves to make matters more confusing. That being said, the story’s not all that particularly interesting even when it does make sense, so I quickly found it better to just focus on the gameplay.

The Lost Child is an enjoyable RPG with hours upon hours of dungeon crawling action. While it shares a great deal in common with the Shin Megami Tensei series, it manages to carve its own identity by modifying the underlying systems of the SMT series without completely changing what makes the overall experience so compelling. If you’re a big dungeon crawler fan or just want another demon recruiting RPG to tide you over until Shin Megami Tensei V arrives on Switch, The Lost Child has you covered.