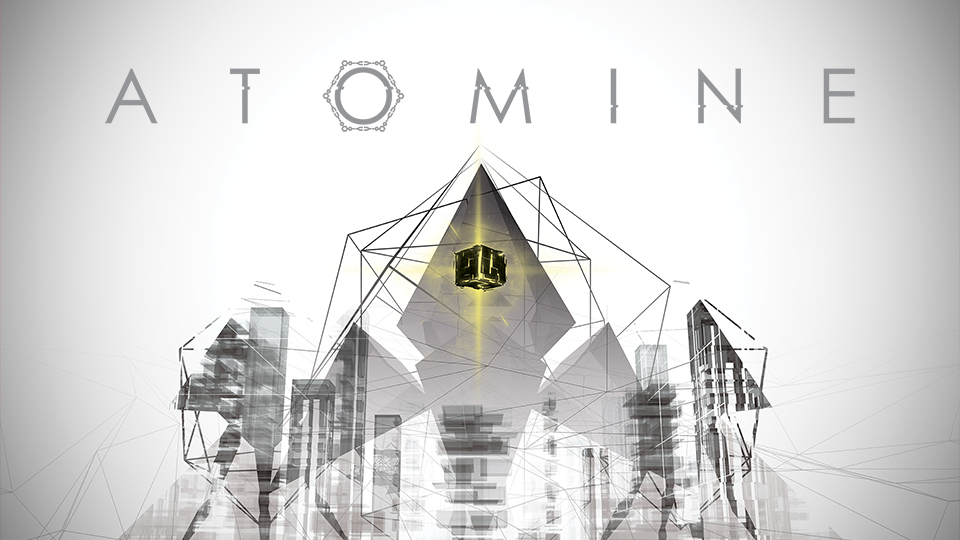 “In 2011, Sergey Ulasen, discovered STUXNET, a malicious computer worm, that targeted industrial control systems, defined as a sleeping threat, waiting for a trigger to start its activation. STUXNET is the first discovered malware that spies on and subverts industrial systems, and the first to include a programmable logic controller (PLC) rootkit.”

Did this sentence bore you? Good, because Atomine, a twin-stick shooter based on this premise, and it is just as likely to put you to sleep.

In Atomine you play as a computer virus seeking to infect the launching system of a thermonuclear weapon. To do so you’ll need to fight through a digital security system of wire-frames and red and black enemies. Each level consists of several rooms full of enemies that you must defeat to reveal the level exit. Along the way, you’ll collect experience to level up at any of the game’s upgrade stations. Doing so lets you unlock new modules that alter the way your weapon functions. For instance, you can change your machine gun fire into a laser, your single shots into quadruple shots and more.

The upgrade system is the real standout in Atomine and allows for a bunch of customization. It takes some time to understand the strange coding-style language of the upgrade descriptions, but once you get the hang of it you’ll be shooting double wall bouncing lasers of death every which way. In addition, several unlockable modules and characters mean that there’s plenty to work towards throughout the game.

Roguelite elements at their best can make an indie game more fun and varied. Unfortunately, the roguelite nature of Atomine never manages to provide any real unpredictability or replayability. Given the way each arena is set out, only three things can ever be changed: how big each room is, where blocks are placed in the room and where enemies spawn from in the room. The enemies themselves only come in three varieties themselves: some come straight at you, some shoot bullets and some do both, but rarely do any deviate from this pattern and each are always the same red and black color.

Atomine’s biggest issue is just how boring it is. The enemies all look the same and have predictable attack patterns. Levels are blocky black and white arenas with little to no variety. I spent the entire game waiting for the game to throw something new and interesting my way and it never did. The upgradable nature of your character and weapons is cool, but without any meaningful stages to fight through, that alone is not enough to keep me engaged. Honestly, Atomine feels like it would have benefited greatly from having hand-crafted missions to play through similar to fellow eShop twin-stick shooter Jydge rather than going through a set number of stages with paltry roguelite elements that barely alter levels each time you play.

I wish I could say some part of the visual or audio design stands out, but that’s simply not the case. Atomine chooses a minimalist approach to its graphics, sporting see-through wire-frame walls and sheer white floors. While it’s very clean and nice to look at, it also attributes to making every room look exactly the same. Similarly, the music is mainly comprised of mediocre EDM sporting simple beats and unmemorable melodies. Some changes in music styles or additional color schemes for levels could have spiced things up nicely.

Atomine’s much touted roguelite elements, fail to impress and in fact drag the whole game down by ensuring every stage will be exactly the same with negligible adjustments. The game’s upgrade system provides plenty of different ways to approach a situation, but every situation will look almost exactly the same. With better twin-stick shooters available on the eShop one has to wonder why anyone would settle for this.