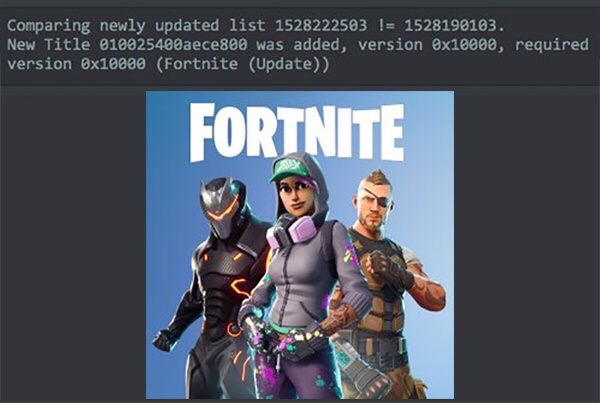 These past few weeks we’ve seen many rumors and leaks about Fortnite coming to the Switch. Although, a new finding by SciresM on twitter has lead many to believe that this could be the final confirmation that Fortnite could be arriving on the Nintendo Switch as soon as next week!

He has discovered that the big N has silently pushed an update for Fortnite to the Nintendo switch eShop. Why is this a surprise? Well, Fortnite is currently not available for download on the Switch. Seeing this update so soon could mean they are preparing for a release during or after their E3 Nintendo direct presentation.

Eager to know more, we spoke SciresM about his find and how he discovered it. He had this to say:

Switch Nindies: Hello, would you be willing to elaborate on your Fortnite for Switch find. We would love to cover it an article.

SciresM: Sure — I run a bot that automatically fetches and retrieves the metadata Nintendo publishes about updates available for Switch games.

SciresM: It’s the same list that the console uses when you hit the + button on a game to see if there’s an update

SciresM: Earlier today, N pushed out to that list that there was an update for Fortnite available….despite Fortnite as a base game not being announced or available.

Switch Nindies: Is this similar to how TW Princess HD was discovered before release?

SciresM: It’s similar, yeah. the difference is that TW Princess HD was found by people brute forcing the list of titles to see if there was anything not known about.

SciresM: This is the equivalent of Nintendo saying “Hey all Switches, there is an update for Fortnite available.”

Well, you’ve heard it here first folks! It looks like Nintendo could be planning a surprise drop of Fortnite during or after their E3 direct this year. Are you excited for Fortnite to finally hit your Switch? Let us know in the comments.

Special thanks to SciresM on twitter for speaking with us about this find. You can find his Twitter below with the discovery via source.