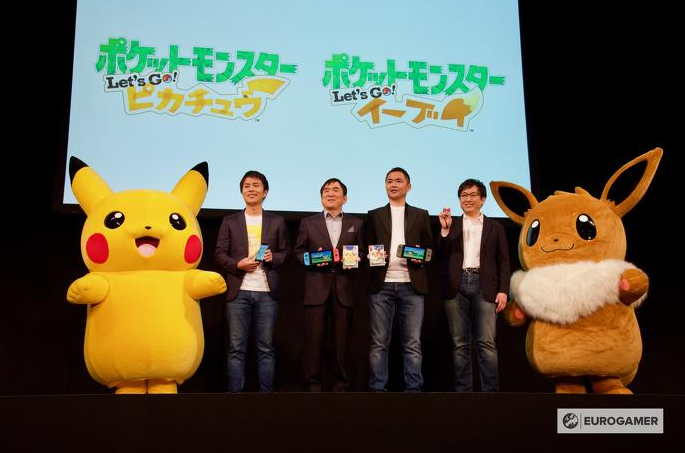 Junichi Masuda on Pokémon: Let’s Go, its Possible Future and Bringing All Pokémon Players Together

In a move that no one could have predicted when a Pokémon Direct was expected, The Pokémon Company hosted a secret press event that offered an invite to a number of Europe based media outlets.

Like those in attendance, gamers the world over got to revel in the reveals of Pokémon Quest, Pokémon: Let’s Go, Pikachu!, Pokémon: Let’s Go, Eevee! and 2 Pokémon games planned for Switch in 2019. Unlike the rest of the world though, those who attended were able to ask questions that resulted in some fantastic answers.

One such outlet in attendance, was none other than Eurogamer and today, they have conducted and posted what could quite possibly be, one of the best Pokémon related interviews of this decade and below, you can find our highlights of what was asked and answered:

An Elaboration on Smartphone and Switch connectivity:

Question: Can you elaborate on the smartphone and switch connectivity?

In terms of what you can do with the connection, right now you can send Pokémon from Pokémon Go to Let’s Go Pikachu and Eevee – and they don’t go straight into your collection or your party, they enter into an area that’s kind of like a Safari park type thing where you can see the Pokémon moving around in there, and you can actually go there and interact with them and catch them. But there are also some incentives to move a lot of the same Pokémon from Go – the same species – and there are some sort of mini games you can play if you do that.

Question: Do Pokémon Let’s Go Pikachu/Eevee work like the main series, with exclusive Pokémon to each game? And will there be trading between the two?

Junichi Masuda: Similarly to the main series Pokémon games up until now, we’ve created two versions, Pikachu and Eevee, to have different Pokémon appear in both games, to really facilitate trading and make people want to trade with each other. So, there is that wireless trading and that kind of gameplay around trading with each other so you can complete your Pokédex.

An Assessment on Pokémon GO  and Expanding on what a Pokémon RPG can be:

Question: Can we learn more about the assessment you made about Pokémon Go and its success, and are there other things you’ve picked up from Pokémon Go to include in Let’s Go?

Junichi Masuda: So in terms of first about how I assess the success of Pokémon Go, of course it makes me very happy to see Pokémon Go be such a huge success and such a phenomenon – and really we think it introduced a lot of people to Pokémon, the idea of catching Pokémon, the idea of a Pokéball. And because of that we really wanted to expand on that kind of idea of what a Pokémon RPG could be, something that’s broader, for everyone, and that’s why we work on these games. So that’s one assessment on Pokémon Go.

With that in mind obviously there are so many people that played Pokémon Go – I think we reached 800 million downloads – so we wanted to create a fun experience for them but at the same time really make a fun game for fans that have enjoyed the RPGs up until now, so it’s really kind of merging those two audiences into one game that we all can have fun and play.

I’m trying to think of other things we picked up from Pokémon Go… I can’t say about any other gameplay ideas that we picked up from Pokémon Go, but one of the things we really focused on was that experience of allowing for, for example, parents to kind of go out and catch Pokémon for Pokémon Go and then give some of those to maybe their kid, who’s playing Let’s Go Pikachu on Switch for example. So that experience is one of the things we wanted to really take a lot of care over for these games.

And there’s probably a lot of things, I guess more subconsciously, that did come into the development of these games – of course I worked on Pokémon Go, for example I created the music for both of them [Go and Let’s Go] so, there’s probably some things that maybe I’m not thinking about that did affect the Switch games.

Question: How do you think the core RPG players will react to the Let’s Go games? I know Pokémon Go was immensely popular but it had quite a mixed reaction amongst more ‘hardcore’ players – how do you appease those players and is it more a case that they should wait to 2019 for the game they’re after?

Junichi Masuda: So the first thing I can say is that… I’ve been the director on the main series Pokémon RPGs – most of them, up until now – and there are a lot of kind of core tenets or rules of the series that I’ve never broke up until now, for example the whole idea of the flow of going into a battle against wild Pokémon, reducing their health and then catching them. That was one of the things that we just never wanted to change but, with these games specifically, I wanted to create a new experience for kids and with this time I decided to shift that towards more of a kind of casual, lighter experience. So that’s one of the things I wanted to do.

And one of the things, for example, up until now in the tall grass you couldn’t see which Pokémon were in there so, a lot of players would kind of avoid the tall grass in their journeys, up until now, and one of the big changes this time is that you can actually see the Pokémon before you actually run into and encounter them so, it’s kind of changed the dynamic to much more of a proactive experience, where you’re going out and seeking Pokémon.

So for me, having worked on the Pokémon main series games, and Pokémon Go, both the players who have enjoyed our RPGs until now, all the fans are extremely important to me – but also the people who played Pokémon Go, and that was their first Pokémon game, they’re also extremely important to me, and what I really want to do with these games is prevent both of these types of players from going in different directions, and I’m hoping that these games will kind of bring them together.

So what would make me happiest would be if Pokémon Go players and traditional Pokémon RPG players actually come together and are throwing out Pokéballs together, either with the Joy-Con or using their smartphones, and really enjoying Pokémon together.

And that’s also one of the things I just mentioned about the parent maybe going out and catching Pokémon and giving them to their children, and sharing that catching experience.

Making the Most out of Switch with Pokémon:

Question: Just to quickly follow up on that, I know you can’t talk too much about the 2019 RPG but can you tell me when the decision was first made to develop that game as well as the Let’s Go games? Did you decide to do LG first and then the 2019 game? And was that decision made to mitigate the risk of the more hardcore, long-term players maybe not being so into it?

Junichi Masuda: So it definitely wasn’t like a risk-avoiding thing. We knew that we wanted to create another Pokémon “series”, as we call them, for all the fans that have really enjoyed the games until now. But the games that we’re talking about for 2019 we’ve been working on those for a while, the same with Let’s Go Pikachu and Let’s Go Eevee – part of it is because there’s a lot of functionality with the Nintendo Switch and we really want players to really experience what there is to offer here so, we’re making two different games at the same time.

And specifically for these games, me personally I really want more kids to pick up and play with the Nintendo Switch, that’s really the goal for me.

Making a Series out of Pokémon: Let’s Go:

Question: Related to that, looking forward, do you envisage there being two series of Pokémon games, say a Let’s Go series and a main series like Sun and Moon – are there going to be two or are they going to come together again?

Junichi Masuda: So I’d say there’s a possibility of that, should the games sell really well and obviously a lot of people play them, but right now we’re really focusing on the development, and just getting a lot of people to play the games in the first place!

Question: You said that the game is inspired by Pokémon Yellow from 1999? Can we find the same story as it was then?

One of the kind of reasons behind that was, with the games being released 20 years ago, I kind of imagined that maybe some parents who played Yellow version when they were kids, will now have kids of their own and they can kind of remember that adventure and maybe give some hints or tips to their kids that are playing the game.

Maybe some other fun things, for example the first Gym Leader, Brock – a lot of kids who maybe grew up with the animated series and not the original Red and Blue series, they may not even know he was a gym leader, so there might be some fun discoveries there.

For a look at the few Q&A, please click here.