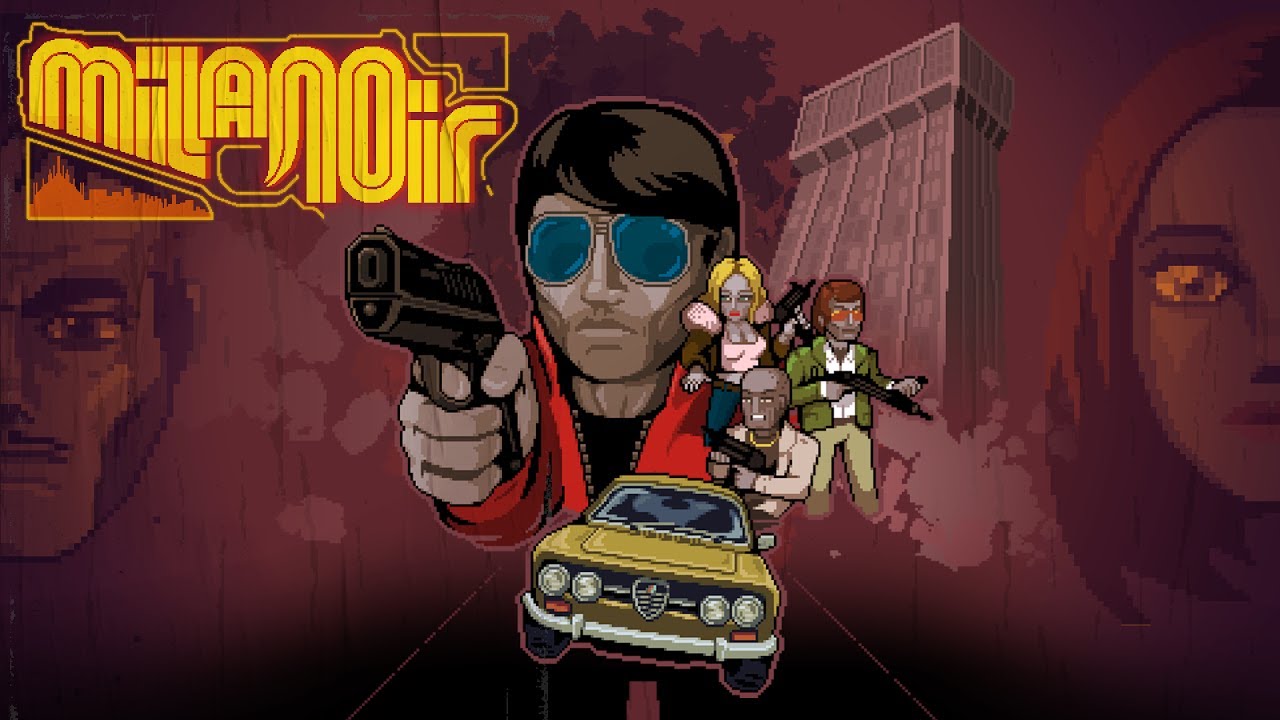 June 1, 2018 7:30 am Published by minusthebrant Leave your thoughts

If you ever wanted a crime-laden spy thriller set in the 70’s on the Nintendo Switch, developer Italo Games has you covered with their action-drama Milanoir. The noir genre has been making quite a comeback on the Switch with LA Noire leading the charge and it’s great to see developers flexing their muscles with this under-appreciated genre.

Milanoir is a European-centric gritty crime drama set in the 70’s. It’s a great setting for the over-the-top violence and corruption that calls back to the many classic Quentin Tarantino films of the past. The story starts you off as Piero Sacchi, a low-life thug hired by a mob felon to go out and do their dirty work all the while having a thirst for revenge. Milanoir goes to some very dark places in its subject matter, but it doesn’t really earn them. Most feel like pasted on controversies to just get a reaction and it left me feeling empty and, quite frankly, disgusted.

The gameplay is reminiscent of modern third-person cover shooters except in this case, it takes place not from an over the shoulder angle. There are brief snippets of walking around and taking in the scenery before action starts and countless thugs will try and strike you down. This is where the cover system is important as you can hide behind obstacles like a table or car and this crouching acts as a cover system, allowing Piero to duck from gunfire and recover his health. However, the crouch button also allows you to roll and vault over obstacles, when combined with pressing a direction on the left analog stick.

Gunfights are frantic bouts that test your aim and reflexes as you duck and dive around the environment like an action movie star, trying to shoot everybody in sight. It usually only takes one or two shots to fell an enemy, and health is slow to regenerate. Milanoir‘s gameplay is more often than not about showing restraint and taking cover versus rushing into a firefight. Most of the time even with the cover their numbers are overwhelming and checkpoints are not very gracious, especially during some ridiculous boss battles and driving segments.

It’s a shame that the clever boss designs were ruined by the aiming system. Most of the boss fights rely on cheap tricks that made any mistake an immediate death and that meant starting the whole boss sequence over again. There is an aim assist that will lock the cursor onto an enemy, but it usually doesn’t work as intended. Most fights start off in unsavory conditions with no cover nearby and this leads to Piero taking about three shots right off the bat, leading to moments of frustrating repeated deaths.

As for weaponry, you’re armed with a standard handgun with unlimited ammo, but you have to manually reload it. There are some powerups like revolvers or molotovs, but they few and far between. The unique gameplay mechanic to combat Milanoir brings to the table is the ability to ricochet bullets off of specially places signs, which will hit any enemy automatically behind cover. I had fun utilizing this mechanic into the combat and it made some sections more fun to play through.

Unfortunately, the worst part of the combat is the gameplay itself with difficult controls making taking cover and shooting feel loose and imprecise. Even with the options to customize the aiming reticule, it still felt like there was no sweet spot for my liking. Because of the button placement, it can sometimes feel like trying to do too many things at once. To make things easier there is co-op, but even that was devolved down to a horde like survival mode of continuous waves of enemies.

The retro art-style of Milanoir pays tribute to the PC games of the early 90’s. The violence is extremely strong and there is nudity, so you’ll definitely want to keep this away from the kids. The soundtrack has an infectious undercover spy thriller vibe to it harkening back to the 70’s, which gives a compelling atmosphere. All dialogue is presented in text, which fits the retro graphics and is conveyed well if you don’t mind overly raunchy writing.

When you are finished with the main game, there is an Arena mode that pits you against hordes of enemies in locations from the main game. This is where it gives you the local co-op option and is fun only to experiment with for a short time. There is also an Extras section, but it just features biographies on characters you’ve encountered through the game. It took me about four to five hours to play through, and that was with me dying up to 20+ times in certain sections.

Overall, Milanoir is an intriguing game that is hampered by poor controls and overly frustrating segments. The story kept me engaged, but really was a letdown in the end building to nothing particularly moving. The art can’t even save Milanoir from being an interesting concept in the noir genre, but unsuccessful in the gameplay department. It’s as simple and flat as its pixelated aesthetic, although there is some entertainment from the pulpy charm it exerts.