[Interview] Hanging out with Toad man himself, Brian Cooper of Japanese Nintendo! 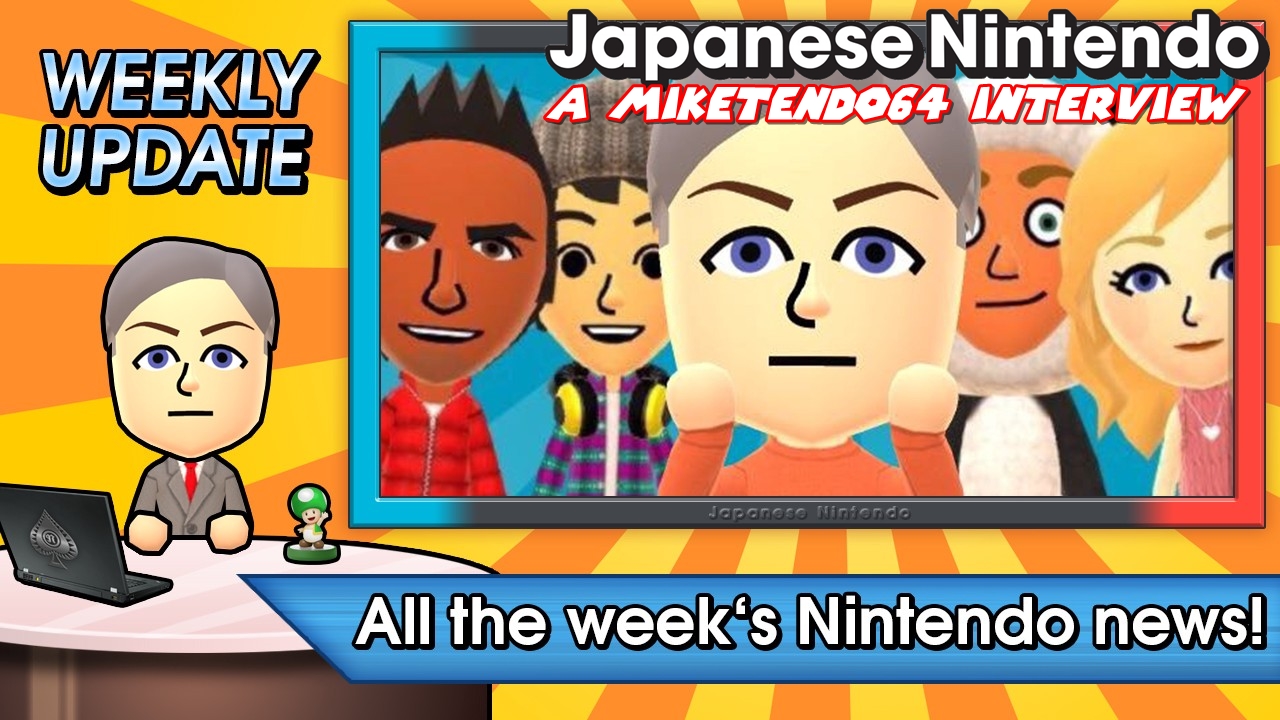 As with any industry and media, anyone who doesn’t write for you/with you/for the same outlet you’re with, are the enemy. They’re your competition and to help them is a sin. It’s something we’re told, but at Miketendo64, we chose not to abide by that notion and it’s not because we’re naïve, but because we’re gamers and not the kind who hurl abuse at you when playing online. We don’t want to crush our opponents and make them feel like nothing. Gaming is meant to be fun and so can be reporting game news, so instead of having competition, we have friends. We have outlets we respect and outlets that we like to engage with and one such outlet, is Japanese Nintendo.

Run by Brian Cooper, Japanese Nintendo is a tumblr based site that is so on the ball that the guy single-handedly running it, has no time to stop. He’s a machine and we greatly respect him, which is why I just had to interview him. Together, let’s spread the brilliant word of Japanese Nintendo:

In typical interview fashion, would you be so kind to begin proceedings by introducing yourself to our readers? What is your involvement with Japanese Nintendo?

Brian Cooper: Hi, yes, I’m Brian (Cooper). I run Japanese Nintendo almost entirely on my own, although occasionally get some help with reviews from Yvonne and Paige from Ladies Gamers (http://ladiesgamers.com) and one or two others.

Miketendo64: For the sake of asking it, what prompted you to start Japanese Nintendo and how did you pick the name?

Brian Cooper: It wasn’t such a huge deal at the time. I had recently bought a Japanese 3DS at the time and was completely addicted to Tobidase Doubutsu no Mori (Animal Crossing: New Leaf) so I just one day started a blog. It wasn’t a major deal to begin with as all it was, was just a fan blog. I didn’t envision at the beginning that it would ever be as time consuming as it is today!

I don’t even remember the name that I started the blog with but I purchased the domain name Japanese 3DS back in April 2013 and moved exclusively to covering Japanese 3DS (obviously!). I changed to Japanese Nintendo a couple of years or so ago to cover Wii U and then the NX. Still waiting to begin my QoL coverage!

Miketendo64: Given the excessive love you have for Toad that is very evident on Twitter, when did your Toad love story, why is he your chosen mascot and who designed those gorgeous new images you’re using?

Brian Cooper: How could you tell?! And I can’t really pinpoint where it all began, but I guess it came from him being my Super Mario Kart player of choice back in the day, then in Mario’s Tennis, Mario Kart 64 and so-forth. And isn’t he a trademarked character of Nintendo Co., Ltd.? Well, then he’s not ofﬁcially my mascot! Seriously though, the images are designed by my good friend Brion (http://cargocollec-ve.com/brion). Look out for new Pokémon and Fire Emblem ones soon!

Miketendo64: How does it feel to be still be in the games media biz and are you still enjoying your foray into the world of video game media?

Brian Cooper: I have never felt like I’m part of any games media business. I more feel like just a fan of Nintendo and mostly prefer it that way as there’s not much difference between me and most of my readers, other than I write about the games too.

Miketendo64: Unlike other media sites that have a website to call their own, you use tumblr and have proven it can be an effective means. What promoted the use of tumblr in the ﬁrst place?

Brian Cooper: Again, this wasn’t thought out at the beginning. I was using tumblr for a personal blog (since deleted in-case you’re wondering!) and it was relatively easy to use. I would dispute your assertion that it is an effective means, as growth in the past year or two has completely stagnated and I really need to move to a new home to allow for further growth.

No Rest for the Wicked:

Miketendo64: Given how hard you work around the clock to keep your readers informed, how do you ﬁnd the time to do it all? You make it seem effortless but in reality, it is anything but.

Brian Cooper: I seldom sleep! Seriously! Something will have to give soon however!

Reviewed Games that Left a Mark:

Miketendo64: Given the number of games you have reviewed over the years for Japanese Nintendo, what 5 games stand out to you the most? (You’re more than welcome to pick games you absolutely loved, found insanely bizarre and left an impression on you for whatever reasons you wish to give.)

Brian Cooper: Well the ﬁrst game is pretty easy – Tomodachi Collection: New Life. This is the game that really helped shape my blog, and the months spent playing really added a fun element. Easily my favourite period of blogging, and the ﬁrst game I gave 10/10 too (I never did actually review Tobidase Doubutsu no Mori, or it would’ve been the second!).

Another game is Minna de Mamotte Knight: Hime no Tokemeki Rhapsody (Gotta Protectors). Deﬁnitely my favourite eShop only game for 3DS and I recommend it to EVERYONE! Possibly my favourite soundtrack too after Secret of Mana.

Super Smash Bros. for Nintendo 3DS is another easy choice. Just a technical masterpiece on 3DS and I can’t wait for the Switch version!

Dragon Quest XI: Sugisarishi Toki o Motomete is another easy choice, and one of the  very few reviews that I’m really happy with.

Finally, I’ll say Oshare Hamster to Kurasou: Issho ni Odekake. Not for the game’s brilliance (it isn’t), but just how much fun I had reviewing it!

Off the Clock Gaming:

Miketendo64: As important as it is to play the games we’re given to review, it is also important to take time and play the games we want to play. So, when not playing the “ﬂavour of the week” and working like a beast to cover news 24/7, what games do you like to play on your downtime?

Brian Cooper: I’m actually given so little games to review and hate asking for them! And I seldom actually get downtime! On the busiest weeks, I only ever turn on my Switch to post the eShop updates! I do like to chill by playing Animal Crossing (Pocket Camp) and occasional Mario Kart (100cc – I can’t relax with 150cc!).

Miketendo64: Being as though we’re well aware of your Nintendo Present, what was your Nintendo Past like? Any favourite consoles, games and memories you care to share?

Brian Cooper: My Nintendo past basically started with me wanting a Super Famicom for years. Alas, they were about £300-£400 in the UK back then (that is without allowing for inﬂation). I did buy a Game Boy however and loved Tetris, Super Mario Land, R-Type and later Link’s Awakening. I ﬁnally managed to get a SNES in the UK launch day and soon after got a cartridge adapter so importing became my thing at an early age. Since then I’ve gone on to buy every Nintendo console apart from the 64DD, Panasonic Q and several hardware revisions.

Top 10 Games of All-time and on Switch:

Brian Cooper: This is really tricky so with little thought here are my top 10 of all time (in alphabetical order!):

As for Switch – the top four are predictably The Legend of Zelda: Breath of the Wild, Super Mario Odyssey, Splatoon 2 and Mario Kart 8 Deluxe. After that, in no particular order – Seiken Densetsu Collection, Zelda Musou, Mario + Rabbids, Penguin Wars, Kyogeki Quartet Fighters and probably Tiny Metal.

Miketendo64: Out of the indies and Nintendo titles conﬁrmed for Switch this year, are there any you’re eagerly anticipating?

Give us Toad in Smash (E3 Dreaming!):

Miketendo64: E3 is around the corner, is there anything you as a gamer would like to see revealed?

Brian Cooper: Toad for Smash! Gaming wise, the Animal Crossing and Tomodachi Collection fan in me would like to see the new entries revealed. I would also like to see something Mario Kart related. Maybe a port of the Bamco arcade game or a remake of MK64 would be cool.

Hitchcock, Music and the SNES:

Miketendo64: When not doing Japanese Nintendo, who are you in the real-world? What are your interests and what is your all-time favourite Nintendo platform?

Brian Cooper: I mostly am out of the public eye in the real world but will probably surprise people in that video gaming isn’t actually my number one interest! I’m a huge fan of mostly extreme music including black metal, drone, doom and neo-folk, I actually ran a music blog for roughly a year before my Nintendo blog which was fantastic. Other than music, I love classic ﬁlms, mostly ﬁlm noir (Hitchcock is my favourite director). I’m also hugely interested in philosophy and am midpoint through a History Master’s (sadly it’s on pause). My all-time favourite Nintendo platform is most likely the SNES/SFC although I have many fond memories of Nintendo 64 and loved going back to the Famicom after the fact. Game Boy Micro deserves mentioning too and I would LOVE a Nintendo Switch Micro!

Miketendo64: It’s been a pleasure having you. Is there anything you’d like to say to ourselves and our readers? The ﬁnal word is all yours!

Brian Cooper: Thank you. And I’m always bad at these things. And yeah, it’s kinda hard when you read through so many websites etc to really know who the good guys are but you, Ladies Gamers, Source Gaming and several others have been really supportive of me behind the scenes throughout the past through months and years. I’m blessed too with having some of the least toxic followers on the internet so I’d like to thank them for their support too!

One thought on “[Interview] Hanging out with Toad man himself, Brian Cooper of Japanese Nintendo!”