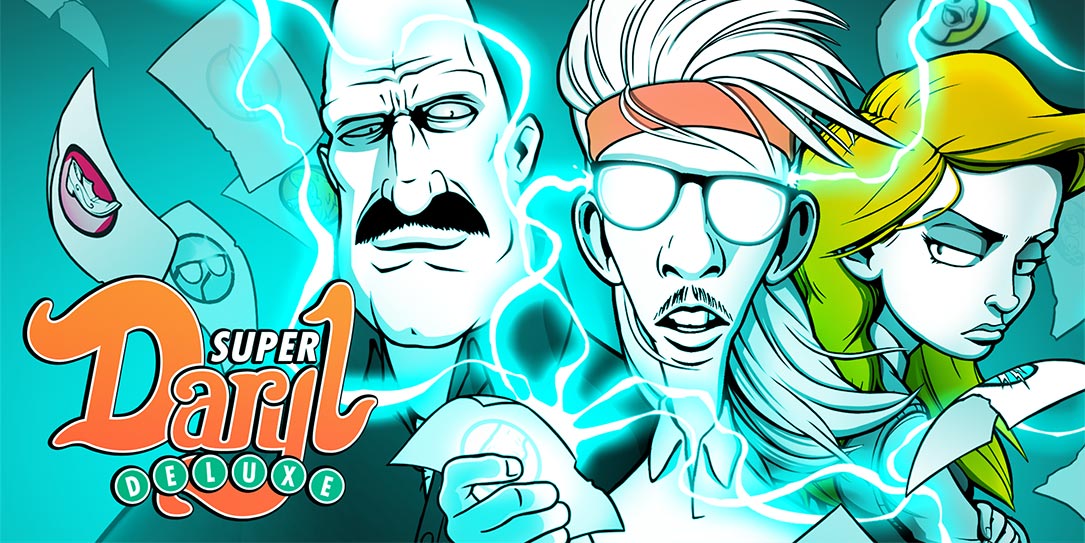 Get ready to experience a totally normal High School, or is it?

Nowadays, many games include RPG elements for its progression system to make things interesting. Games like The Legend of Zelda: Breath of The Wild combines action and puzzle thinking with the usual RPG elements, to create a unique and diversified experience for the players. Super Daryl Deluxe, on the other hand, uses many elements of the RPG elements, such as a level and experience system, customization and more, and joins all of that with the Metroidvania genre, to create a very unique high school experience. But is it a good combination?

Produced and Published by Dan & Gary Games, Super Daryl Deluxe is an RPGvania (RPG + Metroidvania) set in a high school (a scenario not typical for games in this genre) that was released simultaneously on the 10th of April, 2018 on Nintendo Switch and a few other platforms.

When you start the game, you are greeted to your character, Daryl, a weird looking guy that is trying to save his girlfriend from some villains. When you succeed, you discover that it was a dream and in the end, you’re just a weird kid on its first day in a new school.And so the game begins. As you try to make friends, get a job and find love, you stumble into different and strange worlds and start to discover that this school hides some deep secrets and you are right in the middle of it. With no other choice, you have to help those you encounter and find the secrets while surviving the school life.

This premise leads to an interesting adventure that introduces many interesting characters, some who were created for the game, such as the main character and some that are an interpretation of famous historical figures with their unique personality. The story has a few twists, and although they’re nothing shocking or game-changing that becomes memorable, they do allow us to get invested in what is happening and keep playing.

Super Daryl Deluxe also doesn’t take itself too seriously, as it often has a joke or two ready for the player. A joke which can be about the fact that the quest you’re currently on is nothing more than a tutorial or the way a character like Beethoven acts in a certain situation. In the end though, the jokes are normally very well done and will entertain. Should jokes not be enough, there are also include indirect nods and easter eggs or direct mentions of famous books and games that are cleverly included in the story.

Visually, Super Daryl Deluxe focuses on a cartoonish drawn 2D style that suits it very well and can convey very easily who or what that object or character is and, when thinking about enemies, can convey what type of attack that enemy can have. The characters and enemies animations are also so well done that they contribute even more to make this game much more credible and easily understandable. For example Daryl, the main character, is a weird guy and that can be seen in its appearance and actions, such as in the old-fashioned way that he dances. This attention to detail and quality is also noticeable during the game’s many cut-scenes as they are beautifully drawn to express everything that the story needs to tell using a style close to frames from a comic book.

I also have to praise the dubbing done during the cut-scenes. They very well done, without a lot of overacting and matching the character personality. Not only the dubbing is well done in the audio department, but the sound effects are very fitting to the attacks, enemies sounds and actions that Daryl does or meet. This is also reflected in the music of the game, which works in conjunction with the area that you are and with the fact that you are just walking or fighting one enemy. It can range from subtle music that isn’t annoying to moments that you don’t have any music playing.

Gameplay wise, Daryl goes around the many areas in the school talking with other students and characters, accepting their quests that range from collecting a certain quantity of an object, to defeating enemies, going to specific locations and concluding a condition under a certain time. To beat enemies, you use some skills, each with their own type, range and cooldown. As you level up and find more textbooks, new skills can be bought and those that you have already can be ranked up using the Skill Experience that you collect by earning Exp. You also have an inventory, so that you can equip a few items to change some of your stats.

The combat system is very fine-tuned to allow a natural progression and growth of your character and your ability to combo your skills in effective ways even when they upgrade their power. The areas you also get access as you go through your adventure, unless you spend a lot of time grinding by killing a lot of lower levelled monsters, tend to be equally levelled to your own level, so no area will feel excessively difficult or extremely easy on your 20+ hours of gameplay (and I haven’t done everything). And always save, as you will always return for the last time you saved, even if you saved before finishing a part. I would wish they offered the option to easily save after a big important event, but I understand that they focused on going to the bathroom to save.

The quests sometimes can feel a little repetitive and backtracking to complete a mission can be boring as you will only get access to a system that works as a fast travel later in the game. But completing them is always worth as you will always get a good amount of Experience and Skill Experience, a good item and, in some, you can get Textbooks that will allow you to buy new skills, not to mention that some funny moments occur during side quests.

The controls, at first, seemed strangely assemble to unconventional buttons, like you use your skills with X, Y, A, R and ZL (which is also used to run, by holding it) and interact with L, so, in the beginning, I normally ended up pressing the wrong buttons to perform specific actions. But after some time, the control scheme grew on me and I have grown to appreciate it. Should you wish to adapt it to suit yourself, however, you can with near perfect control remapping options. Finally, Super Daryl Deluxe doesn’t really take a lot of advantage of any Switch exclusive features. HD Rumble is supported, but used in few noticeable instances and they aren’t remarkable. There’s no touch-screen support and there are a few instances where the game fails to display texts in a size that is readable when playing in TV, with even more instances during handheld sessions.

At first, Super Daryl Deluxe, looked to be a fun game and nothing more. What it ended up being however, is a very entertaining and even addicting experience that I really enjoyed and shall continue to enjoy by playing even more of it. I would happily recommend this game to everyone looking for a game that tells a good story without taking itself too seriously, which has an interesting RPG and Metroidvania feel to it and an interesting and adaptive combat system to your playstyle.