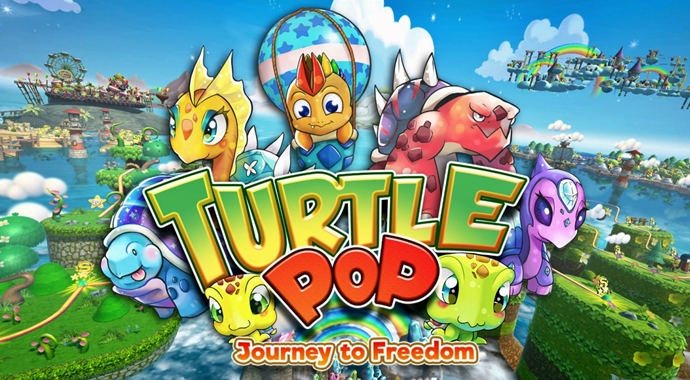 All about that turtle power!

Have you ever wondered what the Teenage Mutant Turtles would be like, if they had no martial arts skills, no Master Splinter to guide them and were put into a platformer game that has some Match-3 elements to it? If you have, the answer is TurtlePop: Journey to Freedom.

Having made its debut on the Nintendo Switch earlier this month and developed by the Singapore based Zengami, TurtlePop is a game worth looking twice at. On the surface, with its cutesy graphics, it looks a 3D Mario World type game, meant for younger audiences, but when you look past the graphics, TurtlePop is so much more than a kids game. It is a game that anyone, of any age can actually sink their teeth into and enjoy, especially when you take in the fact that TurtlePop is more than just another of your typical platformer.

On top of 100+ stages, played out across 7 different themed worlds, which features a range of Match-3 puzzles to solve, there’s also a great deal of co-op to be had, thanks to a multiplayer that supports 4 local players and a co-op campaign mode. Story wise, there’s not much of one, except rescuing your turtle pals Bebo, Deephi, Slimmie, Smarts, Willis and Sparky the Turtle. But, rescuing one of each just won’t cut it, as each level requires you to escort a certain number of each turtle to the rainbow door at the end of each level, before the timer reaches 0.

In the event one of the required turtles dies, like a Deephi, the level will need to started all over from over and it’s not just the falling into pits that will kill you, but bombs as well. One explosion will make your turtle go on their back, but the second one will kill them. It’s not just enemy bombs that can blow them up, but your ones as well, so be careful when throwing them. The good news however, is should the flipped turtle get something to eat, they’ll go flip back over, unless it’s a Bebo and the food is a watermelon, as that will allow it to jump higher and still flip over.

Should you prove successful in navigating the levels, via the means of jumping, avoiding and clearing any coloured turtle tiles, and get to the end with plenty of time to spare, a Bonus event will play out. You will be given another 20 seconds to try and get as many turtles as you can to the goal, to rack up your score. (Points go towards your Star rank, with 3 being the most you can earn and an S rank if you get another points.) But because moving one turtle at a time can be slow going, if you ever feel the need to lead a group of them, you can always hold ZR and have every turtle within range follow. Just keep an eye peeled for all the pitfalls, as it only takes one mistake to cost you the level.

When levels are beaten and stars are earned, you’ll also get a chest that contains Sun Coins, Moon Pearls and Cards. Cards give you access to buildings that allow you to farm foods, a bomb factory, and even utilities that allow you to increase the number of Sun Coins and Moon Pearls you can hold. As for the importance of them, when you have enough cards of one type, they can be used upgrade them to make them more beneficial and buy cards from Sparky. Don’t worry if you buy every Sparky has to offer, as he gets new ones every day.

Now, to go back to the utilities, you’ll want to try and upgrade them as much as possible, especially Turtle Palace as that allows you to upgrade your Genie’s capacity. The Genie is a support turtle that can be called in via ZR (L and R are reserved for swapping between turtles.) The Genie can be used to fire food items at your turtles, blocks wherever you need to build a path or tower and even drop bombs. This is where the capacity comes into play.

The more you’ll allowed to carry, the more tiles, bombs and etc., you can take with you. Be careful with what you select though, as not all items take up one space, as quite a lot require 2 and you will start off with a limited number of item slots. So, try to avoid double items until later much (single bombs and double,) later on in the game. Also, be open to changing your loadout regularly as some levels will require certain items that you might not usually carry.

Should you find yourself being curious over how you’re doing, you can access your profile and achievements from the world menu, when in-between levels when playing the main campaign. You can also see what level you are, how many turtles you have rescued, how many Stars on levels you’ve earned, and how many Star Coins and Moon Pearls you have left over, since your last splurge. As for how co-op actually comes into play with TurtlePop, well, that’s what can be referred to as “the rub.”

Although TurtlePop has a pretty great multiplayer aspect to it that can be beneficial to the main campaign, as you can win chests and the like for it, multiplayer has to be earned. Much like Campaign Co-op has to be earned. To earn them, you have to play through the first couple of levels in the first world, which isn’t that much of a hassle, but it means you can’t just dive right into some 2 player fun. When it is unlocked, when playing through the main campaign with a friend, Player 1 will go about as business as usual, with Player 2 solely handling the genie, so whereas before you could do things exactly when you need to, the two of you will need to communicate clearly, should you wish to continue.

When multiplayer is yours to enjoy though, you can enjoy Arena Battles such as Crown Thief and Lick ‘em Up. In Crown Thief players will compete against each other, in a bid to claim a crown for themselves and try to keep it for as long as they can before another player licks it off them. If you’re able to avoid them, you will get more points for the longer you have it, but the crown will get bigger and slow you down. As for Lick ‘em Up, it’s a race to see who can recruit more turtles and escort them to the goal, to get as many points as possible. Should all the grey turtles be recruited, now the colour of whichever character that claimed them, you can steal them from other players by giving them a licking, but the second you start doing it to another player, they’ll start doing it to you.

Then there is also a Turtle Clash mode, which comes with a split-screen and forces players to try and beat levels taken from the campaign mode (more than 75 levels available, but you’ll need to unlock them by clearing them in the main game.) Turtle Clash is pretty much the same as what you have to do in Campaign mode, except now you need to do it against another player and try to get more points than they can, without dying. (It’s more than it sounds.)

Whatever mode you choose to play though, you will not be able to play as every turtle, until you have rescued them during Campaign, but the ones you do have can be played in 6 different colours. Also, should you wish to play more than one game, you can always add more rounds and more time to the clock, if you really want to make a go of things. After all, with the game running at 60 fps at 1080p when docked and 60 fps at 720p, in handheld mode, why not try to enjoy it at its fullest?

No matter what way you look at it, TurtlePop: Journey to Freedom is a game that provides a wholesome experience for the full family. The addition of puzzles do make things fun, but there is a challenging aspect to this game that is completely all over the place, so some adapting is a necessity. Where it seems to come up short however, is its presentation. The menu screens come across as looking too much like something we’ve seen on mobile games time and time again, but with so much to keep track off, TurtlePop can soon become off-putting, due to being a little too much for much younger audiences, who’d rather just play and that’s it. If you are able to look past the card system though and the cutesy aesthetic, TurtlePop is one indie Switch exclusive you can expect to invest a lot of hours into.

One thought on “[Review] TurtlePop: Journey to Freedom (Nintendo Switch)”