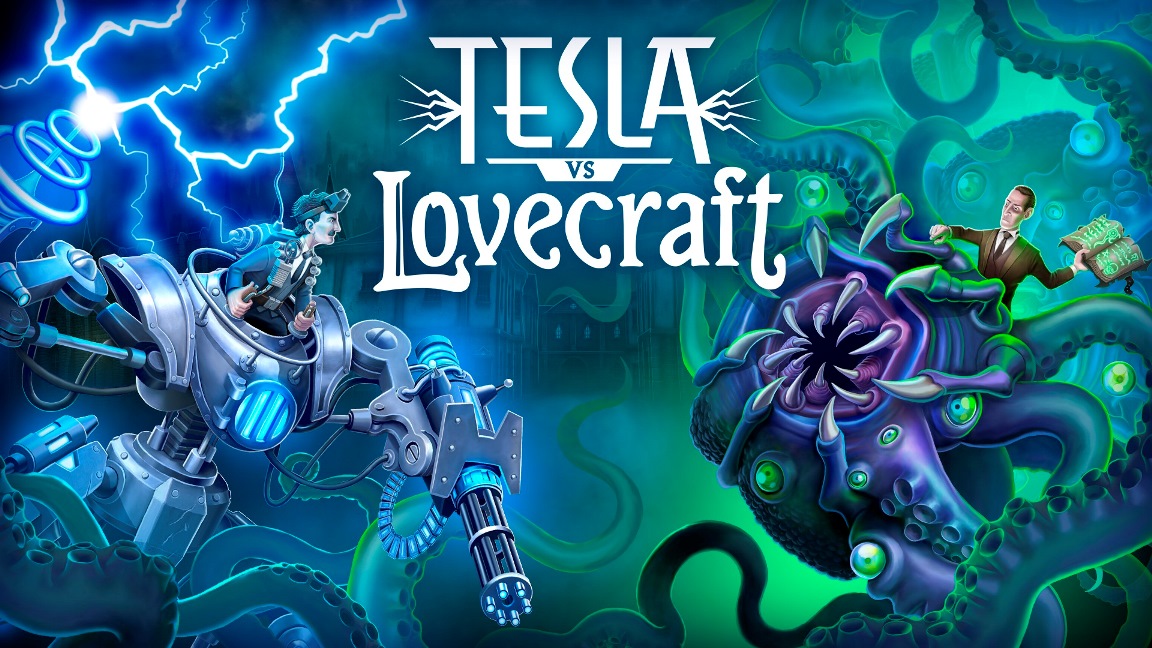 Get ready to zap some monsters back into the Aether realm in this fast-paced Lovecraftian nightmare!

When you think of Nikola Tesla and H.P. Lovecraft you most likely think of a world renown scientist/inventor and a famous author of influential horror fiction. Looking at Wikipedia will tell you that both Tesla and Lovecraft were once disgraced in their lifetime, but it wouldn’t be until later that they would be recognized for their crowning achievements in fact versus fiction. In fact, the two men battled against this very ideal in real life and now in the video game medium. Thankfully, we have developer 10tons creating the fictional side of this battle with Tesla Vs Lovecraft, a twin-stick shooter with plenty of fantastical moments and shooting action for the Nintendo Switch.

The theme is definitely interesting and does fit surprisingly well as a twin-stick shooter. 10tons has done some nice work in the twin-stick shooter genre with their last game JYDGE essentially being a Robocop bullet-hell shooter. With Tesla Vs Lovecraft you play as Tesla who can get electric augmented weapons, including an awesome mech with two heavy mounted mini-guns.

Unlike the premise, the combat is not too original or meaty, but it does throw a large number of enemies at you with wave after wave looking to overrun your position. You start with a simple handgun, but other weapons appear in the level such as shotguns, energy weapons, and machine guns that you can wield against your ever encroaching enemies. Also, while there may not be many different types of weapons, there are three different categorizations of each type of gun. For example, you can have a normal firing shotgun, a gauss type of shotgun, or a repeater shotgun that can be equipped. You are also able to teleport up to three times in succession which is a very important dodging mechanic to master. Teleporting can also be used to dash over ledges or through some walls, which has its obvious advantages.

Different abilities will also be able to aid you and can be melee, ranged or area-of-effect based. Some can even be taken as a joke, yet still effective like a 10 ton weight being summoned to drop on your opponents (a clever reference to the developer). While playing in the arena you gain experience which is used to level Tesla up and this only applies to one arena at a time. You also get two perks to choose from as you level up, including piercing bullets, ricochet bullets, or poison bullets. There are also perks related to Tesla as well, such as being able to push back enemies with an electric blast or creating a poison field around him.

I’m glad there is a great amount of perks and abilities to choose from, however many can be much more powerful than others. Poison bullets feel useless, while having an extra bullet with each shot is much more effective at taking down hordes of enemies. The epic perks are the most interesting though and are only offered once in a while, but they can easily make you overpowered, such as making your teleports unlimited or firing great orbs of electricity that disintegrate anything in their path. This makes Tesla Vs Lovecraft much easier, even though it’s still possible to lose. The randomized nature of perk, ability, and weapon drops keep things fresh, but this luck based system can either give you everything you need to succeed or make the battles feel hopeless if you get nothing effective to use.

The last gameplay mechanic to address is the mech suit and you start off with at the beginning of each level for a short amount of time. Once it’s been depleted, you have to collect all the pieces scattered throughout a stage in order to summon it again. It’s very satisfying to call in the mech when your back is against the wall and mow down hordes of enemies with its twin minigun bullet barrage. Since you’re moving through the level quickly anyway it isn’t difficult to pick up all the pieces and when you teleport anything you pass through is automatically picked up. The mech ends up being a worthy reward to summon once all the pieces are picked up and can be a genuine lifesaver.

Once you defeat Lovecraft in the normal world, represented by nodes on your map where you choose the arena to battle in, you unlock the Aether and Eldritch Planes which are much more difficult to battle through. These realms are the same maps and levels as the normal world, but swarming with more powerful monsters and new objectives. It would have been nice to have had the option to play as Lovecraft, but hopefully, 10tons provides an update or an entirely new game to instead play on a large Cthulhu as Lovecraft, instead of playing only as Tesla.

At the end of each level, your kills and other objectives are tallied and you can unlock crystals by doing this. Each crystal gives you a certain plus percentage of damage increase and are used to unlock permanent stat buffs and character upgrades for Tesla. My gripe with this is that the extra percentage of damage bonuses weren’t ever really explained well. I never knew if it was an increase in damage to the monsters you’ve already slain or an increase in overall damage in the next stage, because it never seemed like my attack damage was increasing between stages.

Overall, Tesla vs Lovecraft is another solid twin-stick shooter from 10tons and has a lot of different mechanics to be excited about. There are a ton of levels with variety, all kinds of weapons and powers to use, and an intriguing setting to get lost in. Like any twin-stick shooter, repetitive gameplay and boredom can settle in, but I think Tesla Vs Lovecraft has enough originality to overcome any significant negatives. No doubt, there are better twin-stick shooters out there, even on the Switch, but if you’re a fan of the genre don’t miss out on this one.

One thought on “[Review] Tesla Vs Lovecraft (Nintendo Switch)”