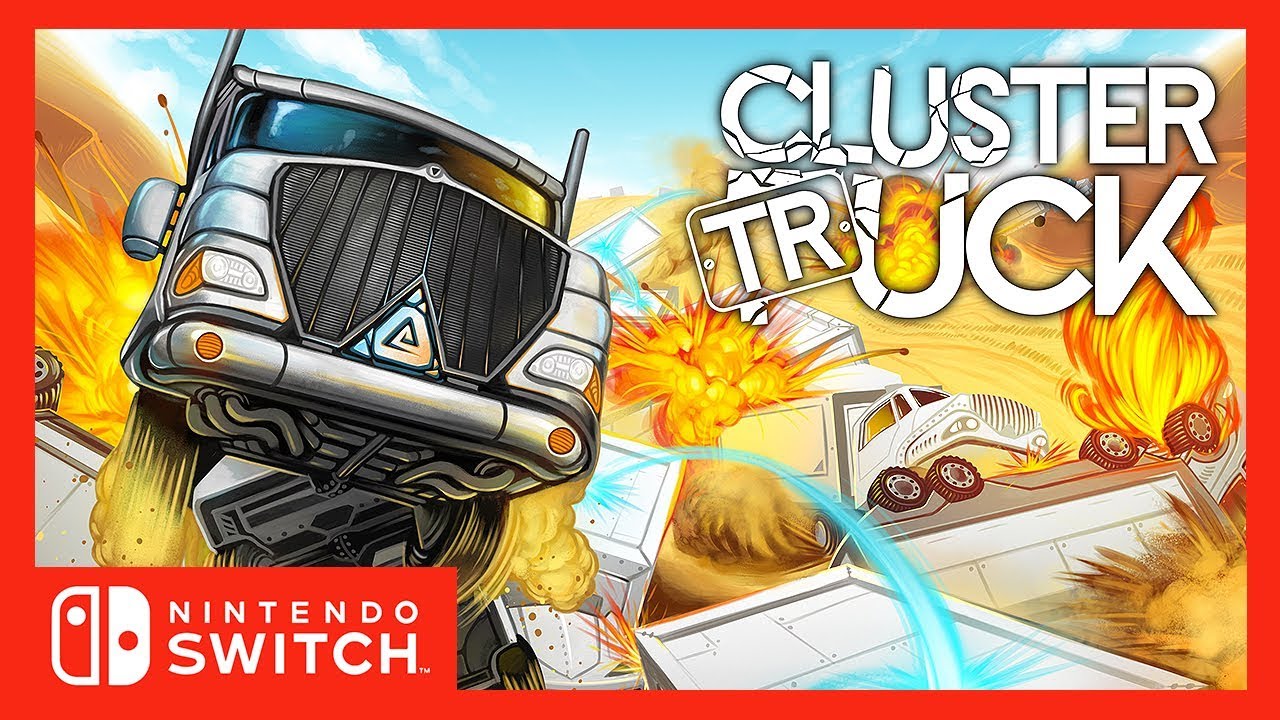 Do you remember the old 1991 Terminator 2 game? There’s a level where you’re on the motorbike with Arnie, as a truck bears down on, well, that’s nothing like Clustertruck at all. Confirmed for Switch via a #HelloSwitch video by tinyBuild Games, designed and directed by Wilhelm Nylund, with development handled by Landfall Games, Clustertruck is a game that has to be seen to be believed. Why? Because it has something of an insane concept to it. A concept that is all about getting to the goal at the end of the level, by jumping from one truck to another, with a first person point of view.

There is of course a little more to it than that, as there are obstacles and abilities, but that’s about it. But sometimes less is more and when you get a game that uses the “floor is lava” principle, you really don’t need all that much. So, while the actual gameplay isn’t too excessive, as all you need to know is the L analog stick is used for movement, A is for jumping, ZR for Sprinting and L & ZR for using abilities, Clustertruck is a game that can have you playing for hours on end. Just because the majority of the 90+ levels, can be beaten in 30 seconds or less, it doesn’t mean you’ll bet every one first time.

Despite each level having a whole ton of trucks, not one of them is driven by a decent driver!  In fact, they’re so bad that most of them don’t even bother to avoid what’s in their path. They’d much rather drive into the face of chaos and flip their wagon, as opposed to get home in one piece and kiss their partner goodnight. Granted their bad driving is a necessity, as the impending crash, is cause for you to leap one to another.

Should you time your jump wrong and you eat a mouthful of dirt, it’s time to restart and try again and sometimes, dying is learning. As tempting as it is to finish the level as quick as you can, as it helps you to earn more points that can be spent on abilities, sometimes it’s just not feasible. Unless you have already brought the double jump, or air dash ability, sometimes you need to stay still. You need to remain on a single truck, long enough for the cluster of trucks in front of you, to come together in the right way that you can get where you need to go, without dying.

Whatever you do though, do not look round when jumping. I know looking back or beneath you might sound like a good idea, as it is something you can do, but it’s not. Looking away gets you killed nearly every single time, so only ever do so on your own initiative. Where Clustertruck really comes into its own though, is in the way the game’s content is presented. Gameplay is mostly the same across all levels, but there are worlds with set themes, such as Forest and Winter. There is a Halloween and Holidays themed worlds, in addition to the insane Campaign mode, but there are abilities that aren’t even necessary.

Although they are present and can help you do better, (provided you’ve earned enough points to unlock them and the Utilities,) you don’t actually need them, as every level can be beaten without them. In the event you do want them, there is mod that lets you perform flips, a grappling hook a jetpack and even an Epic Mode utility. (Makes the game super epic when activated and allows you to earn double points.) However you choose to play though, if you’re not enjoying your time with Clustertruck, you’re clearly doing something wrong.

What might seem like a half-arsed idea made into a video game, is anything but. It may be simple, yet challenging at the same time, but Clustertruck is highly enjoyable. It’s a fun little title you can pick up and play when you only have a spare 5 minutes that will constantly have you coming back for more.