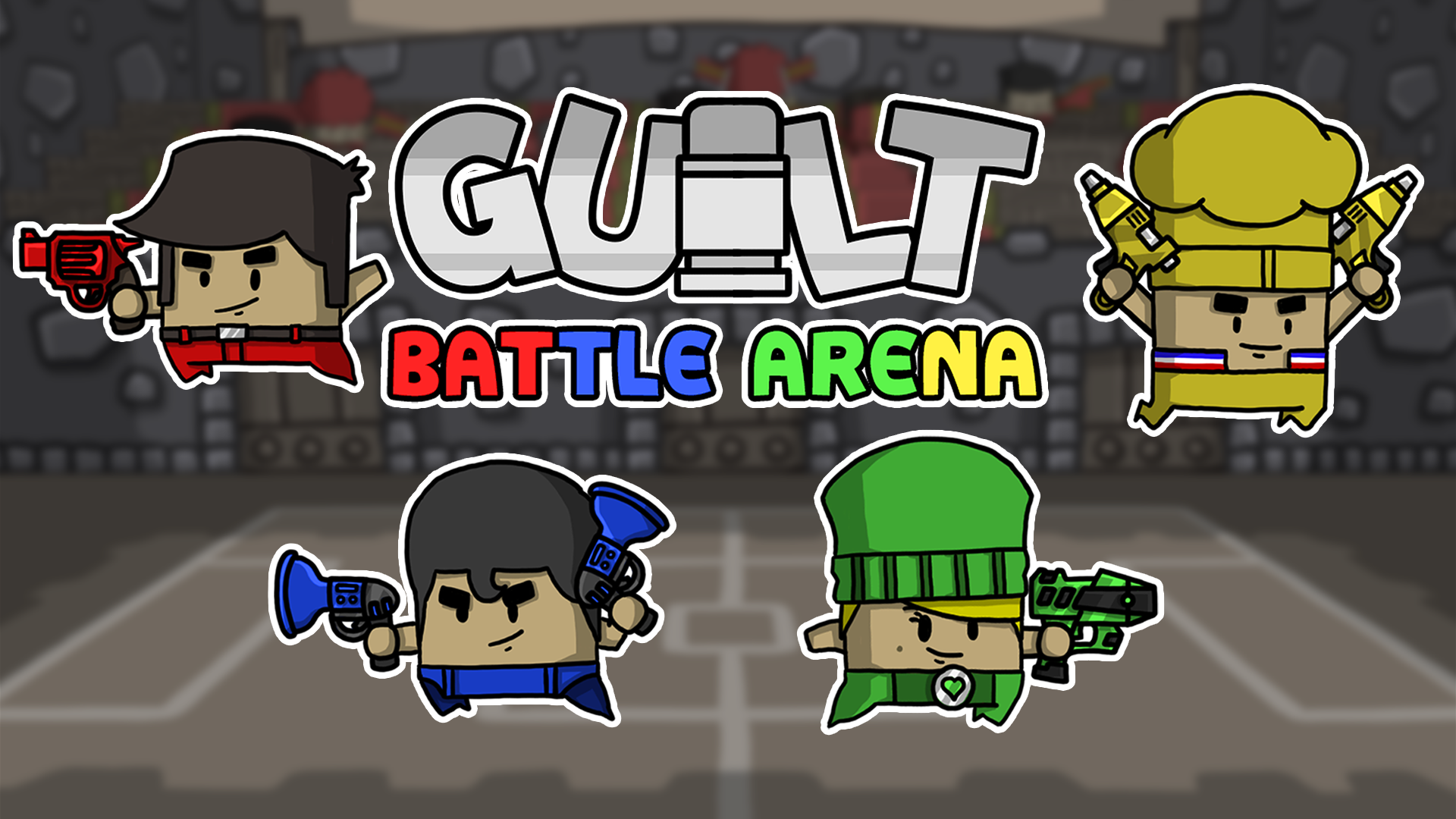 The battle has begun! Do you have what it takes to face your comrades with a single bullet?

Without a doubt, there is a growing number of multiplayer based Nintendo Switch games being released each week, and the newest one to appear on the Switch eShop is Guilt Battle Arena from developer Invincible Cat. Guilt Battle Arena has an intriguing premise of providing a quick, fast-paced multiplayer experience with up to three other friends. While on the surface there is an endearing sense of humor, the game provides very little content and the gameplay is hit-or-miss.

Guilt Battle Arena is a multiplayer-focused title that features a few modes and couch co-op and competitive multiplayer. The majority of fun will be found in the Versus mode where each player selects a character with up to four other players being able to play at one. You then select an arena to play on and some in-game modifiers, such as characters always jumping or an increase in speed every ten seconds. There are also a few different match types to change things up, such as Capture the Flag when whoever has the flag at the end of a countdown is safe from cannon fire while everyone else is hit. However, even with all the different modifiers that are included, and there are a decent amount, there just isn’t enough to Guilt Battle Arena.

The core gameplay itself leaves a bit to be desired. How matches work is that each character has three health and has one gun that only has one single bullet. In order to fire you’ll have to make sure that you have your one bullet. This means that every time you fire, you’ll have to pick it back up in order to fire again. Your character is always moving though, so to change directions you’ll have to hit left or right on the d-pad or left analog stick. You are able to dash by double tapping in a direction and while jumping can push down to drop down quickly in order to avoid attacks. Whenever a character runs out of health they’re eliminated and whoever is the last person standing is declared the winner.

Co-op mode is basically a horde mode, in which you and a friend take on an endless stream of enemies that are coming your way. Every couple of waves the speed increased making the proceedings much more difficult. Your main goal is to survive for as long as you can and try to get a three star rating which you are rewarded with for getting a certain amount of kills. This is the closest Guilt Battle Arena comes to a single-player experience as there are multiple arenas and a few gimmicks thrown at you, but it’s still the same basic horde mode. The only thing that changes is how the enemies look between arenas, still coming at you with the same attack patterns.

If you are able to earn enough stars you will be able to take on a final boss, but other than that Guilt Battle Arena doesn’t feature too much in the way of story content. My biggest issues are that enemy variety is lacking, the weapons they use are quite large meaning it’s easy to get hit multiple times unfairly, and even in co-op mode if your partner dies the match instantly ends instead of one player being able to continue on. If it just had the option to allow at least one player to continue on Guilt Battle Arena would have been much more enjoyable.

Unless you are going to have a lot of friends over, there really isn’t too much of a point to Guilt Battle Arena. The variety in enemies and stages will quickly wane and it has no online functionality. Needless to say, it gets boring and repetitive rather quickly. Thankfully though, everything ran smoothly, and visually the bold colors and cartoony art design did shine through.

Overall, Guilt Battle Arena can be fun for a small amount of time, but it’s overly simplistic nature, lack of features, and non-existent single-player really hamper the experience. As previously stated, there is fun to be had if you can round up some friends to play a few matches with and many silly costumes can be unlocked by just playing, but in the end that only changes the appearance and there’s no changes in stats of any type. If you are interested in a lower budget multiplayer indie title, than Guilt Battle Arena may be for you, otherwise, it’s not even worth the investment.

Did you enjoy our Guilt Battle Arena Switch Review? If you would like to read more of our Nintendo Switch Reviews, feel free to check them out here.