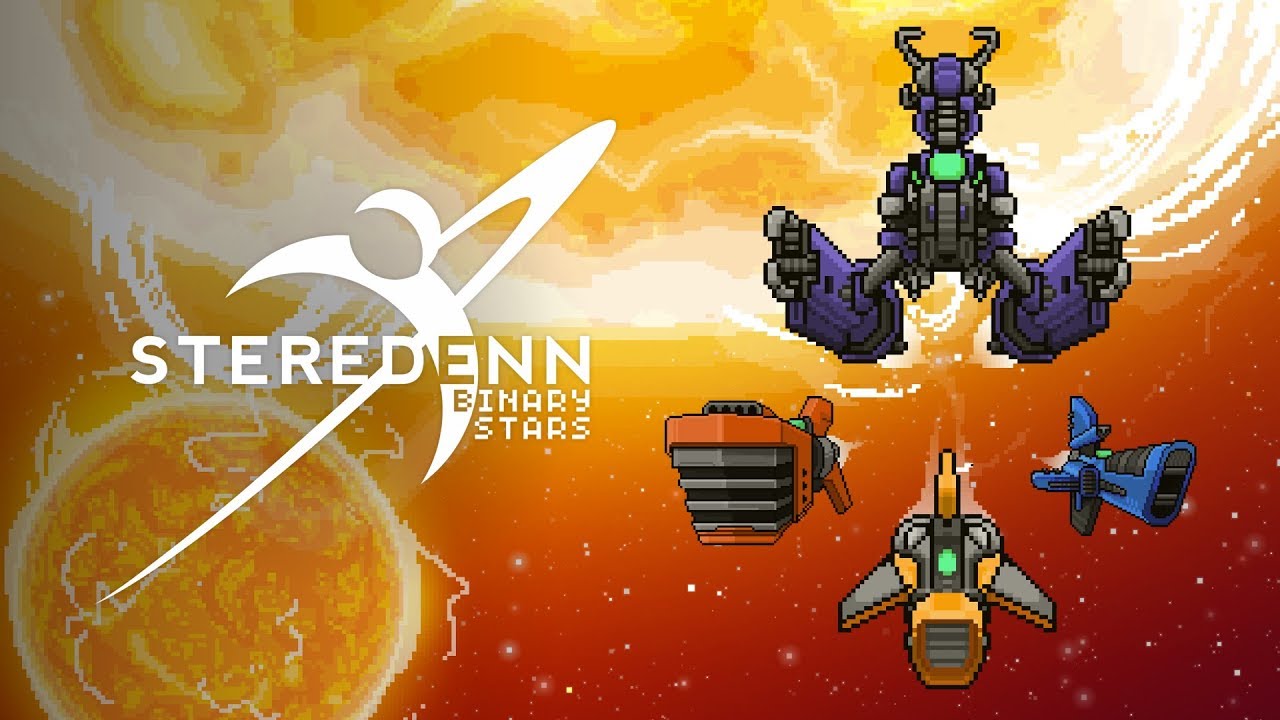 Bullet-hell gamers should feel right at home with this bombastic action, shooter title!

Steredenn: Binary Stars, in the words of developer Plug in Digital, is a frenetic and chaotic space shooter, carved in big beautiful pixels with insane boss battles, and this description could not be truer. Steredenn originally released on PS4, Xbox One and PC back in 2015 as a fast, addictive, hard and action-packed title. Now on the Nintendo Switch, the Binary Stars edition expands on the developer’s original vision with a beautiful pixel-based art style, consistent framerate and very enjoyable to play for shmup fans, however, it is ridiculously hard, to the point of possibly not holding one’s attention for very long.

First off, Steredenn: Binary Stars looks fantastic and is just pixelated enough to make it look retro without ever feeling outdated, while the backgrounds are big, bright and full of color. You are forced into the action rather quickly with there being a small menu with just a few options and a short tutorial providing very little back-story. The story is about what you would expect – you are the pilot of a spaceship and are in training when you come under attack and start the actual gameplay. There is really no story to speak of, especially since there are no obvious breaks in levels to further the story. Training teaches you to move up, down left and right and how to fire your main weapon, as well as switching between your primary and secondary weapons. The gameplay is fast and fluid and really lends itself to the simple controls.

Steredenn: Binary Stars is considered a lite rogue-like shmup, but works more like an endless running shooter. There is no real end and no real levels; instead, you work across this infinite loop which is broken up by boss battles. The levels are mostly randomly generated though after enough time playing, you will start to notice slight patterns in the procedural generation. To try to add a bit more excitement, within each section and before you hit a boss, there are certain types of enemy drop ships which when destroyed drop a new weapon. These drops are random and you can choose whether to pick it up as they may or may not be to your benefit.

Fortunately, most of the weapons you can pick up are very useful and intriguing. You start with a standard blaster which shoots a stream of bullets directly out in front of you and can upgrade through many different types gunfire spreads and weapons. From the standard shotgun, rocket launcher, three and five-way spread-shot, to weapons which turn your ship into a giant saw, clamp or give you a huge laser; the possibilities are staggering. Generally the best weapon to have depends on the section of the game you are in and that makes it extremely difficult due to the drops being random. You could be struggling with your blaster, get a weapon drop, hope for a long-range laser, but instead get a saw.

On top of the plethora of weapon power-ups, you also get the chance to upgrade your ship once you beat a boss. The fragments they leave behind turn in to a set of power-ups of which you only get to choose one. There is a good amount, such as a couple extra health points, an increase in power or laser energy, or unlocking more high tech weapons of a specific weapon type of which there are Bullet, Energy, Contact and Heavy weapon types, though you want to make sure you actually have the weapon first. Choosing to have powerful rockets is great but if you don’t have the specific weapon type during your playthrough, it will do you no good.

On top of the regular game mode, there are four other modes for you to try: Daily Run, Boss Rush, Arena, and Co-op. The daily run is a mode which puts all players on a level playing ground once a day. Everyone who plays is given the same enemies, bosses and weapons to fight and use throughout the round. Your job is to complete the level and get the highest score possible while doing so to give you a chance at reaching the top of the leaderboard. Arena and Boss Rush modes function in relatively the same way only one is used for honing your skills against a specific boss, while the other is to chase leaderboard scores against a continuous stream of boss types. Finally, Co-op mode simply allows for local multiplayer which is very fun, although the lack of online play is a substantial disappointment.

While this all sounds great, there is one major problem: Steredenn: Binary Stars is extremely hard, but not hard to the point of being challenging; it is hard to the point of being extremely difficult for the casual market (maybe even for the non-casual market). There are around ten bosses to face in order to complete a single loop and then start back at section one again. In the multiple times I have played, I have only beaten the third boss once. In fact, in the majority of times I have played, I have died mainly right before the second boss, or up to the third boss. The game demands luck and demands perfection. There are no health pickups and no healing. To heal, you need to make it to a boss, survive, and then you start the next section with full health and repeat.

Even with the insane difficulty, overall, Steredenn: Binary Stars is an excellent leaderboard-chasing, side-scrolling shooter, if you can stomach the extreme difficulty. Any casual shooter fan is advised to use caution when considering investing their cash here as it can become repetitive if you aren’t very good at shmups. However, Steredenn’s tight gameplay and addictive nature should keep you coming back if you need a great bullet-hell shooter.