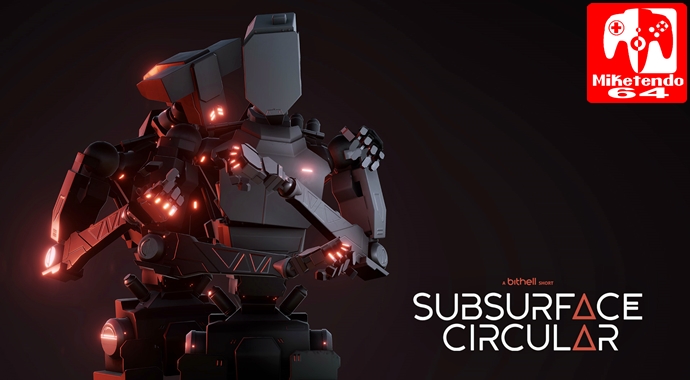 First released in 2017 and now out on Switch, developed by the creator of Thomas Was Alone, Subsurface Circular is a text-based adventure game that follows the marmite principle. Players will either love it, or hate it, as they just can’t get into it and although I find myself among the latter, there is plenty about the Bithell Short for players to like, if they are willing to put their time and money ($4.99), into it.

Due to a Tek going missing, one concerned Tek reports the disappearance and Theta One One, soon finds himself with a case to solve that is not without a few surprises. Upon digging deeper though, there is more than just one Tek who has gone missing and the investigation will cost Theta One One his career as Management are not too happy to learn the Tek took the case without their approval. Before you know it, things go from bad to worse and it won’t be long before a devastating choice must be made and the story of Subsurface Circular can finally end.

Intended to be as a game that can be played in a single session and accompanied by an immersive electronic and atmospheric thumping, soundscape by Dan Le Sac that only adds to the game’s overall experience, with regards to gameplay, this is the bit that makes or breaks Subsurface Circular. As a narrative-driven, text-based game that plays out on a train, with a third-person perspective, in a three-dimensional environment.

Assuming control of Theta One One, players must question his fellow Tek for information into the case he is investigating, via conversation trees, and occasionally even solve puzzles, just to get Tek to open up to him. Should the player acquire “Focal points” (part of the game’s unique vocabulary-based inventory system,) by meeting certain goals, these points can then be used to further enhance your conversations, in your efforts to break the case. Thankfully, although the text-based gameplay could have been perplexing, for the most part, they are fun and highly engaging, if you’re a fan of wordplay and word games and yes, you will want to talk to as many Teks as you can, as the androids do have their own quirky personalities that can be quite entertaining.

Now, just because the game is a short affair, it doesn’t mean the fun has to end there, as there a little more to Subsurface Circular than just an engaging and well-written story, there’s also an unlockable in-depth commentary (BithellBot,) which is an engaging interactive take on a developer’s commentary and should that not be enough, there is also an art gallery made up of that beautifully illustrated artwork and concept art that went into the world that would become Subsurface Circular. So, to say these two additional features worth checking out, would be an understatement as they do make for a decent finishing touch for what is a rather pleasantly packaged text-based treasure.

Great story-telling aside, while it is true Subsurface Circular is quite the remarkable game, in a similar vein to Thomas Was Alone, the gameplay it has to offer is not for everyone and sadly, no matter how many times I approached it differently, during my multiple playthroughs, Subsurface Circular ended up doing nothing for me, but as tastes vary, just because I’m not a fan of it, it doesn’t mean you won’t be as well, as Subsurface Circular does have what it takes to be the next eShop must, for lovers of word focused and text-based adventure games.