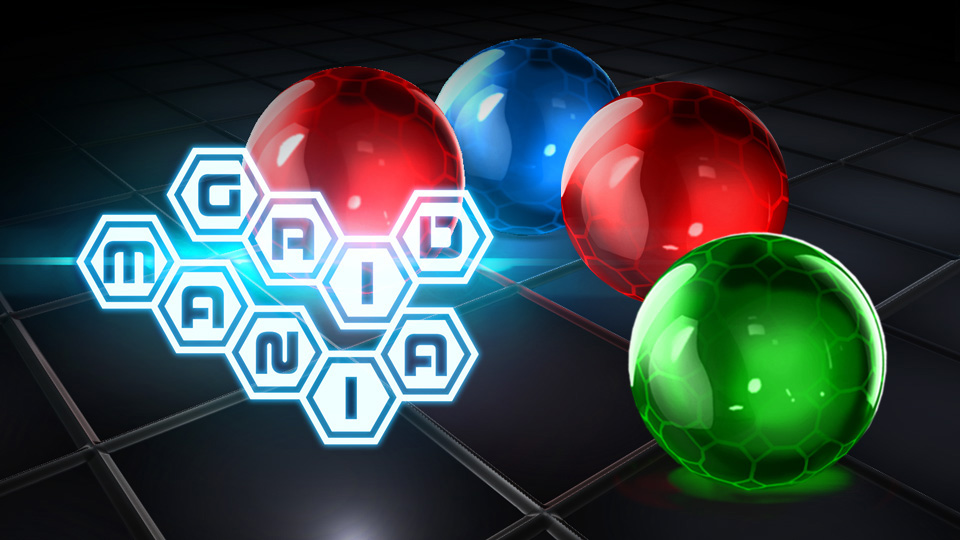 Meet the game where things going balls up, is not a bad thing, as Grid Mania, is out now on Nintendo Switch!

Developed by FX Valley and brought to the Nintendo Switch by QubicGames who have given Switch owners the chance to pick up and play Brawl, Robonauts and Astro Bears Party, comes Grid Mania. A game that will test you brain in more ways you can imagine, since it comes packaged with more than 170 puzzle and 4 playable modes that has a tier system!

Whilst possessing a sci-fi like appearance and accompanying soundtrack, to what appears to be a simple puzzle game, Grid Mania is anything but as those simple puzzles can have you on the verge of your seat, ready to break down and cry. Sure, the levels start of easy enough, with you solely being required to move a handful of red and blue balls left, right, up and down, until they end up on the tiles of the same colour, but things won’t simple for long.

Even if there is a space between 2 balls on the grids, which includes4×4 and 6×6, when you move a ball on one line to the left, every ball on that line will shimmy left and no you will not have to worry about them going against the edge of the grid, as they’ll simply appear on the other side. What this means, is just when you think you’ve nearly cracked the current puzzle, as you have all but one ball where it is meant to be, it only takes one further movement to undo the work you have done and if you think 2 different kind of coloured balls are easy enough to take care of, just wait till green and purple become available and blocks on the map, that’s when things become really interesting.

Now, whilst the kind of gameplay is present in all of the game’s 4 playable modes, there are variations between them, with the Casual Puzzle being the simplest mode to play, as your only concern is getting the moveable spheres, where they need to go, without having to concern yourself with the number of moves it took you to make it happen. It should go without saying that anyone who plays Grid Mania, should all start off with Casual Puzzle, as it is the best mode that eases you into game, it allows you to have a safe place to practise technique, before heading over to Quick Challenge to test out what you have learned.

Going by its name, you would be right to assume that Quick Challenge, is a series of quick puzzles, if your brain is fast enough to solve them, as this mode is similar to Casual Puzzle, except this time around it is all about getting your balls on their associated titles, in the given number of moves afforded to you and yes, if you mess up, you can always try again, but the number of attempts you take will be recorded, so do bear that in mind. Because if you happen to suck like I did, Grid Mania is all too happy to remind you of that fact.

Should you require an easier challenge that is harder than Casual Puzzle, there is always Grid Madness for you to try your hand at, as it is easier to play, as the mode just require you to match 3 balls together, causing them to disappear and marking the tiles beneath them to change to that colour and every tile needs to be filled in if you wish to move on to the next one. But if that sounds too easy, then maybe the mode you really need to check out is the big bad Chain Reaction. With the fourth and final mode of Grid Mania, players are asked to form a connection between balls of the same colour, causing a chain, but for the chain to remain active, the conga line of balls will need to make sure they stay on a tile of their corresponding colour and not interfere with the path of the other chain you’ll also need to create.

By no means is Grid Mania a ground breaking game, as it is a home to ideas we have seen many times over in the past, given the fact that the four modes present are substantial enough in their own right that they could have had their own game dedicated to their concept, FX Valley have opted to packaged them all together and it’s a package that works really well. There is a difficulty spike, which each mode getting harder the further you advance, but that is to be expected of a good puzzle game and that is exactly what Grid Mania is. In fact, it’s a little bit better than good as it also supports touch-screen controls and while TV mode is fun, the best experience you can possibly get from Grid Mania, is by playing with your Switch in the palm of your hands, in between a piece of fast-acting and responsive finger play.

Grid Mania isn’t just another puzzle game that you can get for the Nintendo Switch, but it’s a puzzle game that comes packed with a whole ton of content that will have you playing for hours and it will only have cost you $3.99. Add in the fact that Grid Mania’s 4 modes can stand on their own two feet and that the game’s puzzles will challenge your gamer prowess and intellect, Grid Mania is one of those games that always give you a great deal of satisfaction, whenever you beat one of its perplexing levels. So, if its ball based puzzles you’re after, then Grid Mania is the puzzle game for you, just don’t expect it to be an easy ride. You will have your work cut out for you.